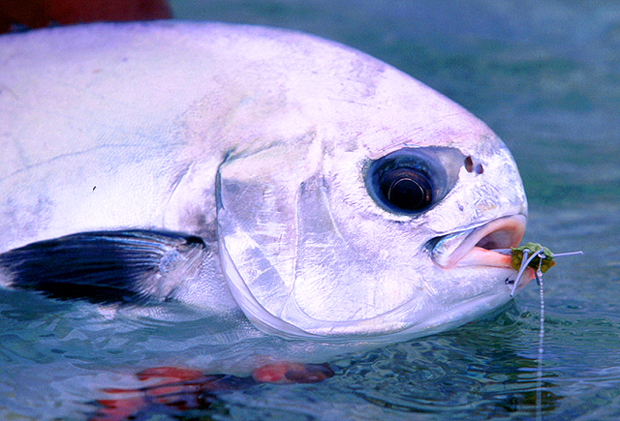 Tip & Tactics: Catching the wary Trachinotus Falcatus on the flats

[dropcap]I[/dropcap]n taxonomic terminology, the permit is a large species belonging to the jack family, Carangidae and is known as Trachinotus falcatus. Its range extends from Massachusetts to southern Florida, through the Bahamas and Caribbean south to Brazil.

Small schools and solitary individuals are found in a variety of coastal habitats, from brackish estuaries to nearshore and coral reefs. The current IGFA world record on a fly is 56-pounds, 2-ounces caught in Ft. Lauderdale, FL on 20-pound test. There are no flats in Ft. Lauderdale so the fish was probably caught on a live crab off a wreck in deep water.

While catching a permit in any habitat is a real thrill, it’s like having touched the Holy Grail to catch a permit on a fly on a flat. Anyone who has several permit notches on his quiver speaks volumes to his or her fellow anglers. Catching a permit on the flats is all about opportunities, but guarding against success are these factors: water temperature, wind velocity, tides, fly selection, casting, guide and spawning time. Regarding the latter, in the Florida Keys, March and April are pre-spawn months and permit will be on the flats and prone to feed more aggressively than at other times of the year. The Bonefish & Tarpon Trust states: “Permit spawn over reef promontories and/or artificial reefs in deep water near the full moon. In Florida, spawning occurs during late spring and summer. Further into the tropics, in Belize, permit spawn every month from February through October.” The spawning cycle in the Bahamas is similar to the Florida Keys.

The Florida Keys’ permit stock is down from decades ago, but this year was notably better. Over development in the Keys and subsequent loss of habitats are attributable to several game fish stock declines. Additionally, overfishing, fishing pressure along with the knee-jerk – last minute tendencies of the Florida Fish and Wildlife Commission’s (FWC) to act only when it’s almost too late are factors as well.

It needs to be around 70 degrees F and holding for permit to frequent the flats. Cold fronts aren’t necessarily bad, but if there’s a rapid water temperature change, like 7- to 8-degrees F  drop in a period of say 24 to 36 hours it will kill flats fishing – even if the temperature went from 78 F to the optimum of 70 F. Permit and other species of flats dwellers will adjust, but it won’t happen in a single day.

Wind is the best friend of a permit fly fisherman

A nice wind of say 10 to 15 knots will riffle the water and permit will be a little bolder because of not so readily able to see an angler or a flats boat. A little wind will also push water and if that coordinates with a tidal exchange it will really stir the bottom and shrimp, crabs an other creatures get kicked up and permit will get very happy.

NOTE: Large permit in 2-feet of water are conspicuous and they’re aware of that so they tend to be on the spooky side. For example, a bird’s shadow will spook a school of permit on the flats. Larger animals will be solo or with one or two others and a bird’s shadow will claim the same reaction. Tides are the arrival and departure schedules for all flats gamefish. Tides, especially Spring tides, create conditions that allow permit to work water they might not normally inhabit and the reverse is true in a neap tide. With Spring tides permit will work the down current side of a flooded bank. Deeper water on the flats also means better escape routes into channels which also hold more water than normally during Spring tides. It’s a situation that relaxes the wary animal a bit.

Del Brown was a fly angler who pretty much dedicated his angling life to the pursuit of permit and caught more than anyone ever has. He counted the Florida Keys high on his list of best places for permit on the flats. He also ranked having a good guide as compulsory. A good guide knows his or her waters, where the fish feed as well as their habits throughout the year. A great guide will know where permit will probably be at each stage of a tide. Brown believed that if you’re a truly skilled caster, it doesn’t matter if the guide is spin fishing oriented if he or she knows where the permit will be. “It’s opportunities an angler needs. If you don’t get opportunities, you might as well go fishing in a parking lot”, said Brown. When we asked Lefty Kreh if he’d fish unfamiliar turf without a guide, he just about said: “Are you nuts.”

If you understood everything there was to know about permit and knew where they were going to be on any given day or time in any venue in the world, but couldn’t cast a lick, you’d be skunked every day. In every sport from bowling to golf, participants practice as often as they can. It is a well known story in professional guiding circles that some clients arrive at the dock dressed to the “fly fishing nines” and have the latest and most expensive gear, but when put on a fish – the wheels fall off.  The client, it turns out, couldn’t hit a barn from 30-feet away. He or she didn’t practice, but they’ll still spend $700 plus tip – go figure? It’s long day of frustration for the guide and angler if the latter is a casting dud.

To have a decent shot at catching a permit you have to be a competent caster!

You don’t have to be a casting champion like Steve Rajeff, but getting a cast off with one or two false casts and hit a target 60-feet away in a blow of “15” is just about reality minimum. If you make that a goal and achieve it, you’re good to go.

Here’s a little caster’s aid: Before you spot your quarry, cast a line to a target – a little off-center of where the intercept point might be. This warm-up will allow you to measure the effects of wind and get a feel for just how far you’ll be able to pitch the fly when the batter shows up. Today, the new dimpled fly lines (floating) makes the latter tactic even easier because you can “water-haul” those lines so easily. A 9-weight would be a minimalist’s selection, but a 10-weight more prudent. You’ll need 200 yards of 30-pound backing and a tropical floating fly line of your choice (matching the rod or over-line by one weight if that helps your performance).

A reel is where you can’t skimp. That doesn’t mean you need to spend $800, but to purchase a Made in China reel that cost $30 in a big box store is the height of profligacy. The drag must be high quality. There are several high-quality reel makers out there utilizing differing technologies with regard to drag systems and they all perform well under pressure, like 3Tand. When you buy a reel, think lifetime.

On leaders, Chico Fernandez wrote: “In the way of leaders, I like the longest I can handle in the prevailing wind condition. And half of that is butt section to help turn over the typically heavily weighted permit flies. Most of my permit leaders range from about 9-feet for very windy days to almost 14-feet for fairly calm days. If it’s super calm, I do some other type of fishing (or head back to shore for a big lunch).”

For flies, the list could be endless, but tried and true is Del Brown’s Merkin, which is now tied with as many variations as you can think of. With crabs being the mainstay of the permit flats diet – that’s what you need to have. Also, few and varied shrimp patterns. A great fly tied by Capt. Paul Fisicaro of Marathon, Florida is called Fuzzy Merkin. Another is Capt. Lenny Moffo’s Merkin version. Tim Borski’s Chernobyl Crab is also a winner. All permit flies must be tied so that they mimic “perfectly” the ambulation of a live crab when in the water. If it does not, you’ll not get a take – except maybe a juvenile swimming in a school.

Getting down to business

Marshall Cutchin (MidCurrent) was a guide in Key West for many years (late 1980s through the 1990s) and well respected for his knowledge of fly fishing for permit. For example, he guided Del Brown 200 days during his career. Here’s a little of what Marshall has to say about permit:

Cutchin says that permit ‘examine’ their prey more carefully than other fish, and that waiting for a permit to make a decision can be a bit tormenting. Newbie permit anglers will tend to strike hard when a permit tips-up on a fly, which moves the fly and spooks it. A crab, unlike most crustaceans, dives to the bottom when threatened, it does not swim away in hopes of out-swimming a permit – an unnatural action such as popping the fly when a permit looks at it will spook the fish.

Further, Cutchin states, there are these scenarios to learn: “A fast-moving permit coming head on – even if it is stopping at regular intervals – usually gives you only one chance to make your cast, and you want your fly to land in front of the fish and within its field of vision.

A tailing or mudding fish often requires that the fly land very close to its head because it is looking down and may be surrounded by a cloud of silt.

A fish hanging on the edge of a channel in eight feet of water is not expecting a fly to drop at all, so strip it erratically to keep his interest.

And all three situations are different from a line of fish cruising across a sea-grass flat, where throwing closer to the fish than normal is necessary just to keep the fly from disappearing in the grass. Remember, they all will eat, but each requires a different presentation of the fly, and that is something best learned by spending plenty of time on the water.”

Key West’s Capt. Will Benson said at a panel discussion on permit last year at the Bonefish & Tarpon Trust Symposium that his hook-up percentage was high when he’s able to sight permit in 4- to 5-feet of water. His technique is to plop the fly close in-front of the approaching fish – letting it sink naturally. Will’s theory is that you don’t want the fish to think – just react.