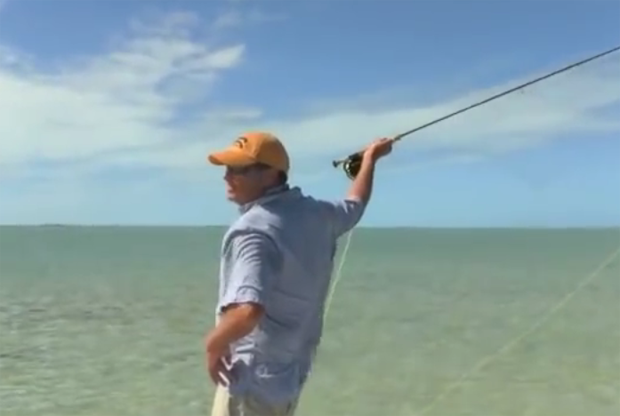 [dropcap]W[/dropcap]e’ve all been down this road; whacking ourselves in the head and back with a fly when it’s windy and especially when we’re using weighted flies. Slow to learn, I finally decided enough was enough. One day, more than a decade ago while fly fishing for bones in Islamorada, a lead eye Charlie attacked me from behind and left a residual knot the size a marble on my thick, Irish skull. I realized then that it’s always going to be windy in the Keys, South Florida and the Bahamas, especially in the winter,  and that lead eye flies were a part of the game. There had to be a better way to cast them without suffering from combat fatigue? We all learned how to modify our casts so as to not keep injuring ourselves, but modification to the overhand cast with a 9-foot fly rod wasn’t the answer.

Like South Florida and the Florida Keys, it always blows 15- to 20-mph (and more) in the Bahamas in the winter

Although it’s simple to explain how the Belgium cast works – it takes a good bit of practice to be on auto-pilot. I couldn’t say that I had it down cold in one day, but I was more than efficient in three days and by week’s end, I was good, but not great.

On windier days the biggest bones, tarpon and permit are caught. Some can improve their casting in these winter conditions by overlining by one weight. For example, my 8-weight set up has a 9-weight fly line with about 2-feet of the front of the fly line cut off. Leader construction would go from about 12-feet to about 9-feet. I have given up on knotted leaders and strictly use knotless leaders. My weighted patterns are tied sparsely.

There are many modern day misnomers for the Austrian casting technique:

The late Lee Wulff reintroduced the Austrian Cast and inherited the inventors intended use of it – very short rods. Lefty Kreh also embraced it as well – recognizing the technique as a better way to deliver a fly on windy saltwater flats. Fly angling purists in Europe award the honor of inventing the cast to a River Keeper in Austria named Hans Gebetsroither.

NOTE: The inventor of the so-called Belgian Cast main intention using his cast was to avoid river bank flora (high back cast). Neither Wulff or Lefty had much success selling the casting technique, or at least to the point that it’s now in everyone’s kit-bag. Today, with the Florida Keys, Bahamas, Seychelles, Christmas Islands and other wind swept flats getaways on the trip-tics – the Austrian Cast is a must know for any flats invasion.

SIDEBAR: In 1975, A. J. McClane, executive editor of Field & Stream wrote a long article  about fly casting techniques, tournaments and about Albert Godart, Lefty Kreh and several others. The article was titled “A Matter of Style” with a sub head; “It’s not how long you make it, but how you make it long – and that’s where the arguing begins.

NOTE: Godart, a product of the 193os and post WWII, was a Belgian and is credited with promoting the cast. He won several tournaments using the Belgian cast.

In Godart’s time, casting clubs and tournaments were very popular in Europe and North America.

Here’s a good YouTube demo of the Belgian cast by Capt. Bruce Chard . . .