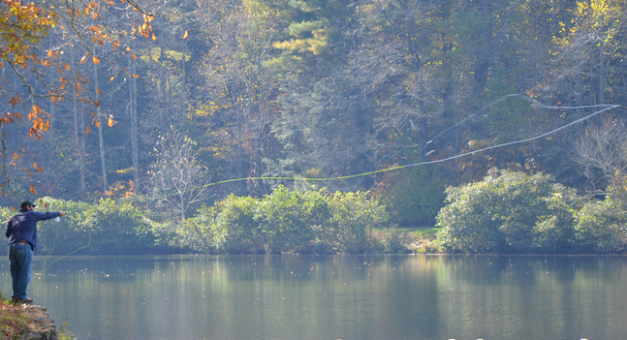 [dropcap]A[/dropcap] younger friend who belongs to the same fellowship of men and women that I do is also an Episcopal priest. I am his occasional fishing buddy and non-church member of his congregation’s conservation volunteers that are enthusiastic about clean streams.

My reward, other than his friendship, has been as a guest on visits to five private local lakes and ponds he’s been granted access permission. All venues have an abundance of stocked largemouth bass. One lake holds bruisers up to 8-pounds (so far).

Father Ellerbe has conductors baton-like casting motion. He complains bitterly about this malfunction which has the predictable outcome of inaccuracy. However, in pond/lake environments with bass, accuracy has value limitations if the caster can ably get the fly line out distance wise. Nonetheless, inaccuracy is often the cause of a missed opportunity, no matter the species. On one outing, Father Dan’s wife, Leslie, joined us. She had a similar casting deficiency – obviously the result of listening to the wrong alleluia. I decided to venture into coaching her. She was a willing listener, and Dan was within earshot – showing piqued interest.

I could not have become Lefty Kreh

Fortunately for me, Leslie and Dan both could cast well enough so as not to have to deconstruct their entire stroke. Something I would not have volunteered to do.

Their collective misfiring had only to do with the most common casting error – not staying on the same plane start to finish (no, I’m not talking about specialty casts).

I got Leslie to watch the fly line. She immediately recognized what I’d warned caused errant fly landings, waves or corkscrewing in the line. When she stuck with one plane, start to finish, voilà. Consistently, the fly began landing exactly where she’d aimed. The only adjusting left would be distance, which cannot be taught. It can be talked about ad nauseum, but not taught.

I slowly weaved into my coaching not breaking the wrist.

Leslie asked, “Do I have to stay at this angle?”

No, I said, whatever is comfortable works perfectly if the plane is consistent throughout the cast. The only thing you need to guess at is the distance, but that will come once the rod becomes a friend in your hand.

I added, Casting overhead seems to produce the best accuracy, but some folks, like me, can’t do that for hours. Just get the most comfortable casting angle for you, and stay on the same plane, relative to the ground. Eventually, the fly rod will become your best friend and accuracy will not betray as a “baton” cast will.