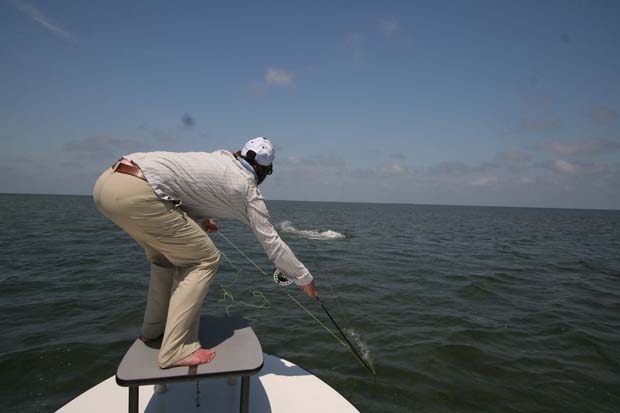 By David Olson, managing partner of The Fly Shop of Miami 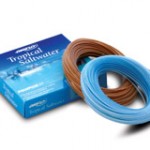 [dropcap]I[/dropcap]n an effort to keep their fly lines from getting soft and sticky in the Florida heat, tarpon fishermen used to keep their fly lines stripped into a cooler filled with ice. With the advent of so called tropical lines in the mid 80s, that is no longer necessary. Since then, line manufacturers have further developed specialized cores and coatings to produce such lines, and they remain relatively stiff even in extremely hot weather. They dominate the fly line inventory of most Florida fly shops.

Most manufacturers label such lines as tropical, or name them after species associated with tropical conditions, such as tarpon or bonefish. Those that are labeled cold water, or those formulated for cold-water species such as trout, striped bass, salmon or steelhead may cast fine in Florida from fall through early spring, but not during the height of summer. In the southernmost tropics, you should use tropical lines year-round. Conversely, tropical lines get a bit stiffer, and develop troublesome memory on the coldest Florida winter days. That is when it is time to switch back to standard fly lines built on more-supple cores.

Standard fly line cores are made of braided nylon, which is similar to Dacron; tropical fly line cores are made of either single- strand or braided monofilament. This, along with stiffer, harder line coatings, decreases sag between the guides. New coatings do not get as tacky or sticky, so the line does not cling to guides, or to itself when piled at your feet on a hot boat deck or in a stripping basket. Lastly, non-sticky lines pick up less dirt. The line is thus easier to shoot and manage. 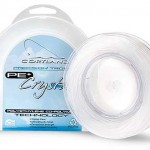 Fly line manufacturers determine line coating hardness with a durometer. This device measures the depth of an indentation on a polymer or rubber under a given force. A value of “0” would indicate a total indentation, and a value “100” indicates no indentation. For comparison, a rubber band generally registers about 25.

“The harder coatings also stand up to wear and tear, there’s less friction passing over the rod guide surface in hot weather. They are more resistant to nicks and scrapes,” says Dalton.

RIO’s advanced coating construction (called Agent X) produces a harder exterior finish with a higher-floating internal coating, creating a line that floats high but is smaller in diameter, thus easier to cast in the wind.

Fly line manufacturers use various core materials to best match up with their chosen coatings to get the best performance. RIO has changed their tropical line cores several times over the last 11 years, settling on a singlestrand monofilament because it is much easier to dictate stiffness. Plus, the line is easier to stretch, and has less tendency to twist. According to Dalton, RIO’s first singlestrand core required more force to stretch than anglers were used to, but switching to a less-elastic core actually reduced the line’s tendency to redevelop memory (return to the coiled form) when reeled back onto the spool. The company’s bonefish line cores have a breaking strength of 30- to 35-pounds, and 40- to 50-pounds on their tarpon line.

Scientific Anglers offers tropical formulations in myriad floating and sinking fly lines. They now offer lines (floating, sink-tip and full sinking) with their proprietary Tropi-Core technology. Their extensive Mastery Series of lines include those labeled Bonefish, Tarpon and Redfish, indicating they are meant for tropical heat, though interestingly, the Redfish line also comes in a coldwater version, built on a more supple multifilament core, making it ideal for Louisiana, Texas, and even cold Florida winters. As far as coatings, the company’s highly touted Sharkskin (Saltwater, Tarpon and Saltwater Clear Tip) and even newer dimpled Mastery Textured lines (Saltwater Taper) are built on braided monofilament cores for stiffness in hot weather.

The Cortland Line Company came out with their popular Tropic Plus series of lines some years ago with wide acceptance.

They have expanded their warm-weather offerings under the Precision Tropic Plus label: PE+ Crystal (a clear floater), Bonefish Floating, Redfish, Tarpon and Tarpon Ghost Tip. All of the above lines are built on a braided monofilament core.

Airflo Fly Lines are unique because they are made of polyurethane rather than PVC (polyvinyl chloride). Polyurethane resins come in varying degrees of flexibility, which allows Airflo to easily tweak the material’s stiffness to produce lines that stand up to heat. Tim Rajeff, distributor of Airflo lines, says the company’s Polyfuse technology is the key. “Our lines are non-PVC and extruded, and have two layers. An ideal ratio of hardness between the inner and outer layer is arrived at to produce a desirable stiffness. We do not depend on the stiffness of the core at all,” says Rajeff. “Many socalled tropical PVC lines on the market have gotten harder and harder over the years, but the downside is lots of memory, partly due to the stiffer cores. Airflo lines come off the spool straighter, even in cooler weather.” Airflo touts its Ridge series of lines for hotweather fishing. “Our tropical lines have longitudinal ridges for the entire length. This decreases surface area contact with rod guides. But another benefit is that unlike smooth-surfaced lines that can tangle badly on a hot boat deck—particularly when there is wind – the ridges serve to greatly decrease the chance of not only line twist, and resulting tangles, but somewhat prevent a section of line from sliding across another while on the deck. In short, it stays put whereas smooth lines do not.” 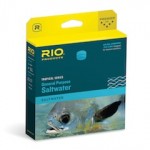 Because so many fly fishers in Florida and the tropics like to sight fish, most tropical lines are colored tan, drab green or blue in an effort to reduce flash in the air, thus reducing the chance of fish seeing it. This color choice is debated by some because a brighter color allows a caster to better see it against the sky or a backdrop which helps with accuracy. I personally feel that most casters are better off with a more visible color, but most manufacturers only make dull-colored tropical lines.

Short of dunking your line in an ice bath, in a pinch you can decrease the stickiness of a standard fly line in hot conditions by cleaning it often during the fishing day. This will decrease the amount of dirt and grime it picks up off the boat deck, so it will shoot somewhat better (not to mention float higher in the case of a floating line). But it will not perform as well as line formulated for the tropics. Here’s a little trick that keeps your “non-tropical” lines cleaner and a bit cooler so that they shoot better: Soak a white beach towel and lay it flat on the casting deck. Strip your line onto the towel while fishing. Also, if the wind comes up, it is less likely to blow into a pile. Of course, a line basket, and especially a tall one, will keep your line somewhat shadowed from the direct sun, and and that’s a plus.