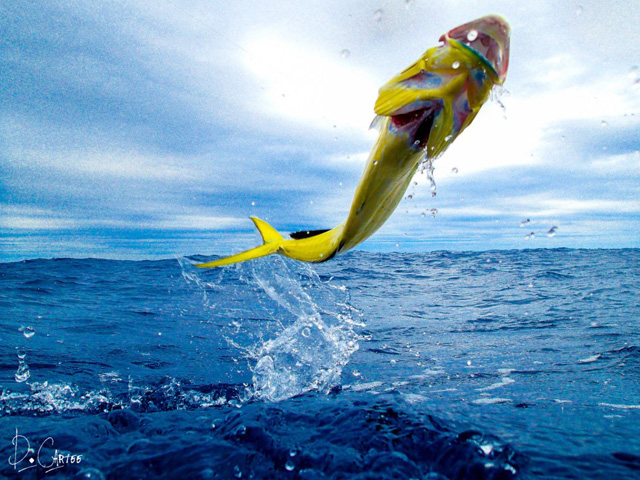 Tips & Tactics: Mahi on the fly 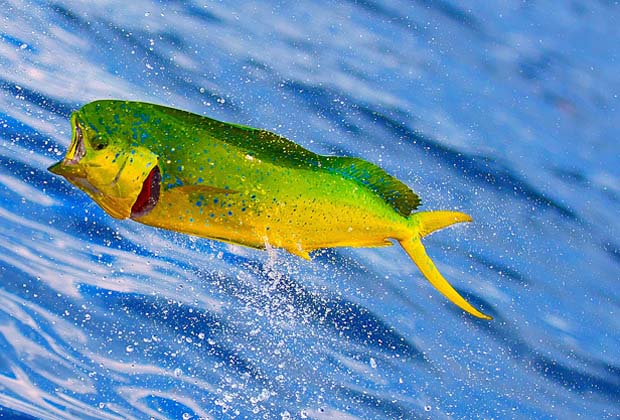 The pompano dolphin (Coryphaena equiselis) is likewise distributed worldwide but is more open ocean migratory than the dolphinfish. It is also limited to temperature ranges of above 75.2 degrees F – several degrees above what the dolphinfish variety can tolerate, which is  above 69.8 degrees F.

Common and pompano dolphins will sometimes be found schooled together. The pompano is often misidentified as a small dolphinfish female or juvenile, but they’re very easy to tell apart. A pompano is thickest mid-body and the dolphinfish at the head of the body.

The dolphinfish variety can weigh 100-pounds and the pompano variety about 8-to 9-pounds. However, a 35- to 40-pound catch would be considered a trophy.

Each species has life spans of 1.2 to 4 years, reaching in the case of dolpinfish 6-pounds in less than one year and over 30-pounds in three years. Maximum would be 50-inches long for a mature adult male. The all-tackle world record is around 80-pounds and with a fly rod 69-pounds.

Both species do not aggregate spawn but do so in pairs and year round in water temperatures of 78.8 degrees F. A mature female will spawn every six weeks and broadcast about 400,000 eggs. 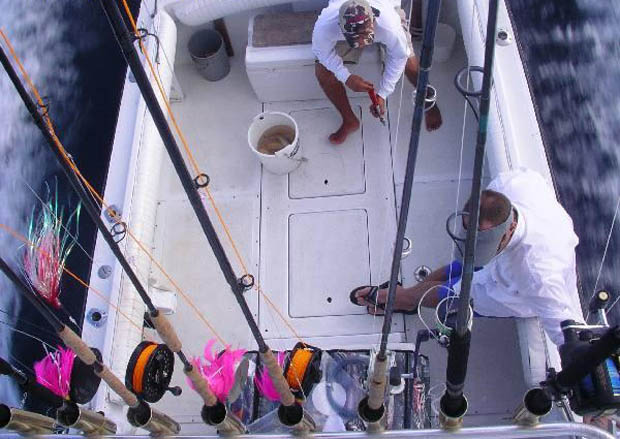 Finding fish is why you hire a captain. Casting and hooking is the easy part. Always get a captain with great creds when heading offshore.

Most anglers believe that dolphin will ‘always’ be found under flotsam, but their feeding instincts and patterns are strictly governed by the availability of food. From around November in a typical year, they’ll be in a 100-feet of water or less and anywhere in the open blue water of the ocean in late summer. That said, they will many times be right where you think, under boards, and flotsam or sargassum weedlines. Finding dolphin is never a sure thing: there’s migration patterns to consider, moon phases, wind direction, currents and yes, tides. 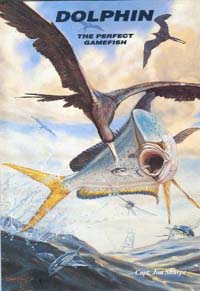 The author, aboard a series of fishing vessels named Seat Boats by the ex-Maimi Fireman, Captain Sharpe, learned the many keys to finding many Mahi, mahi. He compiled the “how-to” fishing techniques for catching dolphin over his 35 years as a charter boat captain in the Florida Keys. And the book has become a scientific reference for how to track the common dolphins’ feeding patterns and stimulus’. Jim junior has taken over the captaining of Sea Boots and is the go-to dolphin game fish captain in the Florida Keys.å

In Capt. Jim Sharpe’s book, Dolphinfish, The Perfect Gamefish, he points out: “. . . that as dolphinfish migrate northward along the coast of the United States, northeast winds create tailing conditions whenever the wind opposes the flow of current. . . . tailing is is a term used to describe fish using the circular, upper surface cyclonic movement of wave energy to propel them into the strong flow of the Gulf Stream current.”

A northerly wind will break up weedlines and dolphinfish will stop feeding even if they’re visible in the remaining portions of the weedline. Southerly winds will help build a weedline of sargassum and flotsam – with mid-June to late August along the eastern seaboard being prime.

Capt. Jim Sharp also discovered that the influence of tides can have an amazing effect on water as far offshore as 20 miles. An incoming tide will scatter sargassum weedlines and an out-going tide will compact that same weedline and hold lots of dolphinfish. Therefore it’s always important to know the tides.

Birds are also a good indicator of dolphinfish being in the neighborhood. Capt. Jim’s tip: During the fall migration terns in large numbers moving with the current will indicate schoolie size dolphinfish are feeding and very few terns will indicate large adults are feeding.

Dolphin fish can motor at 50 MPH and leap to catch their favorite prey, flying fish. Their body shape also allows them to feed on their sides – right up tight against weedlines and pick off anything using the weedline as a safe haven.

Fly fishing for the dolphinfish

A dolphin on a fly generates more acrobatics then with other tackle. Why is an unanswered question.

There are two scenarios for fishing dolphinfish on a fly. One is trolling. Outriggers are set out with hookless poppers/lures or bait. The scene that follows when the dolphinfish are up is right from the sailfish-on-a-fly playbook. The angler pulls off about two rod lengths of line and holds the fly between thumb and index finger – positioning him or her self port side of the cockpit (if right-handed). The lures/bait are  pulled in and the boat is maneuvered to an angle that benefits the angler (right-handed) getting off a short, quick snap-cast just before the lures/baits are yanked out of the water. Dolphinfish, unlike sailfish, will likely spook if they get too close to a boat. To avoid that happening, and using the forward motion of the boat, the angler strips off enough line to let the fish encounter the fly, which is being stripped. If the cast is too far off the mark or short.

A recast, using a water haul is the perfect response [tension of the fly line created by the water] and can produce a greater distance and better accuracy than using a double-haul.

Once the fly is where it should be, use short, deliberate and consistent strips of about 6-inches. The easiest way to strip with consistency is to tuck the rod under the armpit and use both hands to manage the stripping. The timing is sensitive and requires a good captain and a good mate. Do not set the drag much over a pound. The take will be hard and there won’t be any mistaking it and you won’t be able to stop the initial runs. Two hard, quick hook-set pulls using the butt end of the rod and your legs at the beginning of the fight will ensure the fish is stuck good. When stripping line back on the deck, be sure it doesn’t get wrapped around something or get wrapped around your legs or feet.

The second scenario, dead-boating, is just as fun, and good casting skills are needed here as well – when the weedline approach is in play. In this script the captain will maneuver the boat so that the angler has favorable wind direction and doesn’t have to punch the line into the wind or fear getting whacked with the fly. Depending on the vessels configuration the angler can use either the cockpit or bow to cast from. The bow usually providing the advantage of height. If the presentation doesn’t get the fish to attack, the mate will use a spinning rod with a hookless lure/popper or bait – casting it against the weedline and then retrieving at a super-fast rate, which will generally get the dolphinfish hot to trot. When the teaser is in range of the anglers casting distance ability – the teaser is yanked out of the water. The angler replaces the teaser and starts the retrieve in exactly the same manner as noted above. 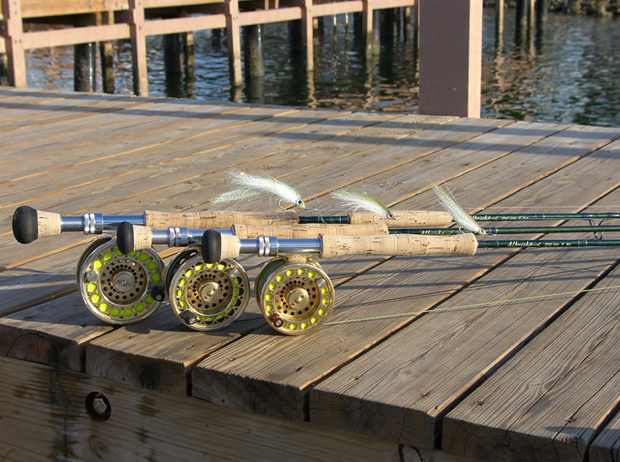 The reel will always play a big part in any offshore saltwater angling. Invest in at least two high-end reels or you can go the added spool route. The latter can be time consuming if there’s an immediate need to switch. For example, a 9- to a 12-weight system.

There are three reel companies that measure up as big league in these modern times that are capable of putting the breaks on versus bill fish. The leader on that scoreboard is Mako, and the new guy on the block is Seigler, and my favorite is the more affordable Nautilus.

For a definitive article on Seigler Reels and Mako Reels big game reels . . .

For Mako Reels just go to their website, Seigler Reels the same with an extra click on fly reels, and Nautilus Reels has everything in fly reels you’ll ever need.

Those reels are not your limit, there are others like the Tibor, of course.

Scott ties all the flies you’ll be using – his patterns, so you need not worry about bringing any of your own unless you’d like to spend time doing other than catching fish. Use his leaders; he’s got plenty of rods and reels too, so if you decide spur of the moment – you’re good to go. Hamilton photo.

An assortment of sizes and colors in poppers, squid and streamers up to 4/0. Big poppers always of interest to big fish lurking below the surface. The following screenshot are flies tied by Capt. Scott Hamilton, Florida’s East Coast [Palm Beach] top offshore game fish on a fly captain.

NOTE: Some believe if you’re IGFA rigged you are fly fishing, if not IGFA rigged, you’re not even fishing.