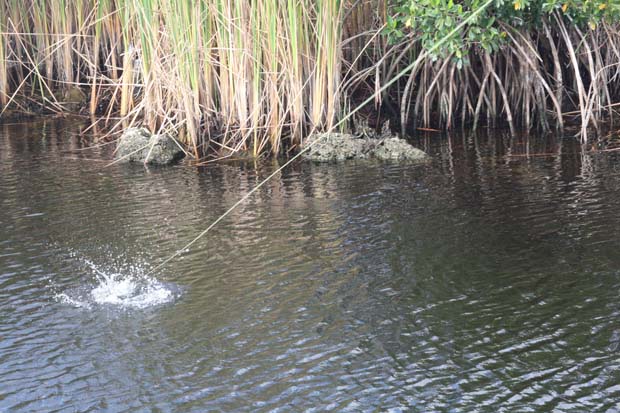 Tips & Tactics: “Revisiting the ditch with a wobbly stick”

“You have to fish hard to enjoy it more.” The “Trail,” as it’s colloquially known, is Florida’s state route 41 and is the southern most connector of Miami to the west coast. The portion of the “Trail” west of Everglades City, where we fished, has dozens of fishable “Flat” bridges that hold in their darkness hundreds, perhaps thousands of baby tarpon and snook. It’s a veritable nursery and alive and well. Under the bridges, you can hear snook and tarpon crashing baits with the sound effects amplified because there’s just a few feet between water surface and concrete on all three other sides.

How do you cast under a flat bridge? First, you break a few rod tips, as I did that day. Steve said: “In my early days of learning ‘flat bridge’ casting, I broke three rod tips in one day.”

Well, if I’d paid full attention to Steve’s pre-immersion coaching on ‘flat’ bridge casting, I wouldn’t have ended up the day being down two rods.

Here’s the skinny. First, make a normal cast away from the bridge and perpendicular to either of the two end abutment columns you’ve selected to fish. You don’t want to cast long, no more than 30- or 40-feet. Second, as soon as the fly lands you MUST immediately haul – keeping the rod tip low, close to the water, which purposely avoids contacting the rod tip with a support column, abutment or the bridge span itself. This technique will assure the fly lands deep under the bridge with tip intact. Third, keep your dominant hand wrapped around cork handle and pinching the flyline; use your off-hand to strip the fly. Short, deliberate, steady pulls of no more than an inch or so. Author gets a shot at a “Flat Bridge” nursery size tarpon. Steve landed one that was about 10-pounds, the biggest of the day. Photo by Steve Kantner.

The rest of the Trail

Anywhere along the Trail that has a ditch, canal or provides ingress and egress to lakes and estuaries with a canoe, or an extremely shallow water skiff with lower HP motor, will fish well into the deep backcountry salt marshes and lakes or on the north side, which is  primarily fresh water.

You need to be mindful the tide. Getting stuck in the  mud is not fun – you’ll get eaten alive by mosquitoes.

At 40 mile bend, just west of the Miccousukee Resort and Casino, holds some of the best fresh water largemouth bass fishing in Florida. That eastern section of ditches and canals are on the north side.

Tides knowledge and where to fish takes some concentrated effort

If you don’t have knowledge and start your fishing guide-less on the trail; hopes of a killer day will fade fast.

Small flies are the ticket here, trout size steamers come to mind along with small muddlers, sliders and poppers. The color range is white to black and in between. Even bigger tarpon, in the 30-pound range, as well as large snook, will greedily eat small flies when they are in the mix. Fifty years ago it was different. Legend Norman Duncan catches another monster snook. Photo taken on Florida State road 92 – just off the “Trail. Then, Marco Island was uninhabited and the beach was loaded with big snook. Photo courtesy of Norman Duncan.

NOTE: As is the case anywhere in South Florida, you have to stay alert, watch where you’re walking due to snakes and gators. If you have a child with you, don’t let him or her wonder off.