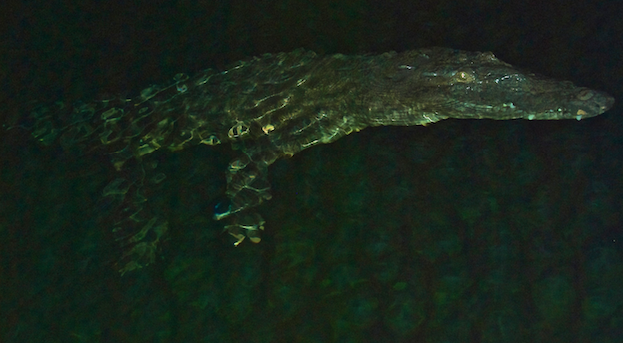 This is a continuation of our story on a dream trip to Cuba aboard Avalon’s “La Tortuga” to Jardines de la Reina via. BTT and Angler Adventures

Read Part 1 of this adventure…

[dropcap]D[/dropcap]ay 1 of fishing in the JDR – By 10:30 AM, we’d eased off the bonefish flats and started working the edges of the mangrove shorelines, poling into several really pretty lagoons looking for juvenile tarpon. The temp was already over 90, and the humidity was climbing as fast the perspiration soaked our shirts. It was almost impossible to consume water faster than you were sweating it out, especially if involved in casting to rolling tarpon with your heart rate up and your adrenal glands in overdrive. Each day we jumped and brought to hand many acrobatic tarpon ranging from 8-20 pounds along the shorelines and in the lagoons. These guys are adrenaline inducing firecrackers that provided endless amounts of angling pleasure. We used 9- and 10-weight rods with both floating lines and straight 60-pound test leaders because of the proximity of the mangroves. (Personally, I am not a fan of straight 60-pound leaders as it exceeds your fly line’s breaking strength, and you run the real risk of losing your fly line, rather than a fly and part of the leader; but because of some of the heavy weed in the lagoons, it was not possible for us to convince our guide Leonardo Arche to use a more typical segmented leader. He said he didn’t want knots picking up weed when striping a fly.) I learned some time ago that at times like this, it is best to just listen to your guide. As well, we did not lose any fly lines and did manage to move the fish when needed. Purple & black foam tarpon toads, tan & brown craft fur grizzly-barred toads, and more traditionally shaped tarpon flies in chartreuse and yellow (with a gaudy splash of red/orange) all seemed to be favorites for the mangrove-oriented juvenile tarpon. Most were tied on razor sharp big-gaped Gamakatsu hooks. (Anecdotal evidence suggests a heavier hook is needed for tarpon over 60 pounds as the hooks we were using have a tendency to be a brittle and break under the increased pressures applied by 60+ pounders.)

Due to the oppressive heat and humidity in the lagoons, we’d take a break for lunch in the shade of the mangroves, wash down the dry sandwiches with more water, or better yet the brightly-flavored Tucola Cola, (made from sugar cane, not high fructose corn syrup.) After lunch, we moved off the mangroves to the cooler deep-water flats looking for permit and the occasional cruising pod of tarpon.

Over the course of 3 of days, I caught bonefish and tarpon each day, setting myself up for the proverbial “Flats Slam”, and I had anywhere from 6-10 decent-to-excellent shots at permit each day. Having caught permit on a fly, I assumed that I wouldn’t be subject to “permit fever” and would be calmer; ummm, WRONG!

In general, I have managed to overcome most of the ways to lose a bonefish while bonefishing, unfortunately I have a lot more work to do when it comes to catching another permit. The fact that I had two of the three flats species “to hand” over the course of three different days certainly added to a severe, self-induced case of being “all asses and elbows” when the guide would say: “Permit, 2 o’clock, 26 meters!” Bowing to the Silver King. Photo by Rick Bannerot.

Oh yeah, I forgot to mention, Cuban guides call their shots in meters requiring a mental math calculation for American anglers; just one more ‘effing further thing for me to “solve” in the bow…(See how quickly those G.D. fish have reduced me to swearing?) By my estimate, and I am only counting “shots at fish” as being within casting range, with the rod, fly and fly line at the ready, I personally had close to 25 legitimate chances to seal the deal in five days, splitting bow time with Evan. (He had roughly an equal number of shots at permit.) On our fourth day of fishing, Evan got a bonefish early, followed shortly thereafter by a nice 20-pound tarpon, putting him in the “designated hitter” slot for extra shots & bow time to help his odds of completing a “Flats Slam”. We eased into deeper water, and after a couple of shots at small tarpon pods, we found a permit cruising in the loose swells off the beach. Evan made a solid cast; the permit slipped up to his Avalon Crab fly pattern, and promptly slurped it in. Evan strip struck, Leonardo let out about 5 different excited “whoops”, started the engine, and proceeded to drive Evan around and along the deep edge of the reef, masterfully keeping angler and fish away from the razor-edged fringes of the reef protecting the deep flat and sandy beach. In less than 10 minutes, Leonardo was able to position the boat and Evan lead the silver disc alongside the boat, whereupon the permit was carefully tailed and brought aboard with much fanfare and high-fiving all around. It is really fun to see a guide and the sport both share in the special moment of landing a permit caught on a fly. As our fishing days grew short, a hurricane formed near Cuba, sliding 150 miles north of us, and bottomed out the barometer in our area; the fish went completely off their routines; so we headed back to Havana to shoot more lifestyle photos, drink a few mojitos and nosh our way through some of the tasty emerging nouveau Cubano cuisine. It would be remiss not to acknowledge the warmth and good humor of all the Cuban people we encountered during our trip. Despite the depravation and oppressive political climate they have lived under since the early ‘60’s, the spirit of the people remains vibrant and real. Now, before the cruise lines start to overwhelm the genuine kindness and humanity of Cuba, you owe it to yourself to spend some time fishing, or diving, bird- watching, car-gazing, or simply touring the galleries, museums, jazz & salsa clubs throughout Havana and the rest of Cuba before the magical stasis time bubble ceases to exist. Vaya con Dios! Read Part 1 of this adventure…