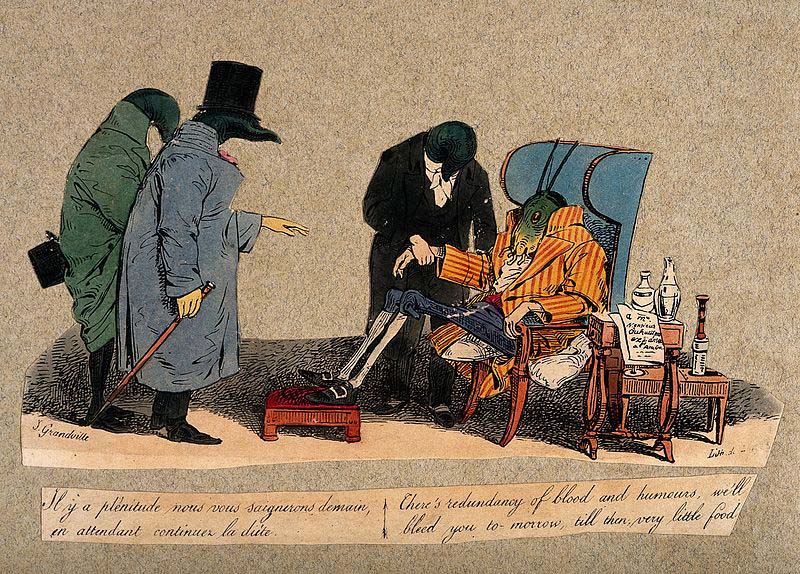 Video: Tim Flagler with another leech, the Intruder Leech

Three leeches in the role of physicians attend a grasshopper in the role of the patient and announce a course of bloodletting – Coloured lithograph after J.J. Grandville, circa1832. Image credit Wellcome, a global charitable foundation based in the United Kingdom. A commons image.

Make Mine a Leech, please

If it’s a leech fly pattern, I want to see it. I’m obsessed with the power of leeches as I’ve not yet seen anything that swims not take interest, and sooner or later, eat. I’m not talking about a starved stocked trout that will bite a Cadillac bumper, but native fish, especially larger animals. And that includes 100-pound tarpons ingesting leeches, especially if focused on crabs, like in Boca Grande, Florida. It seems an attention getter amid the normal food traffic.

I keep several forms of leeches on me at all times. Bahamas fishing for bones, Argentina or New Zealand for monster browns, Alaska for similar Jurassic size rainbows [although a mouse will outplay it], redfish mudding, bass anywhere anytime . .. and so on.

I think Tim Flagler, fly tyer Allstar along with Ruben Martin, are closet leech fans, and of course, I’m now outed as such

A while back, we introduced Tim’s version of a Landon Mayer Mini Leech, and although we had little feedback [which is not unusual and hasn’t been for over ten years], I have had increased success with that leech, as compared to several others in my quiver. NOTE: Make pine squirrel mandatory. I have not yet fished the Intruder version, but on Flagler’s word, I’m pretty sure it’s a go on this one as well. Too, like the mini it’s a cinch to tie – you can tie up 10/12 Intruders in about the time for a first period of dull NHL puck pushers’ game.