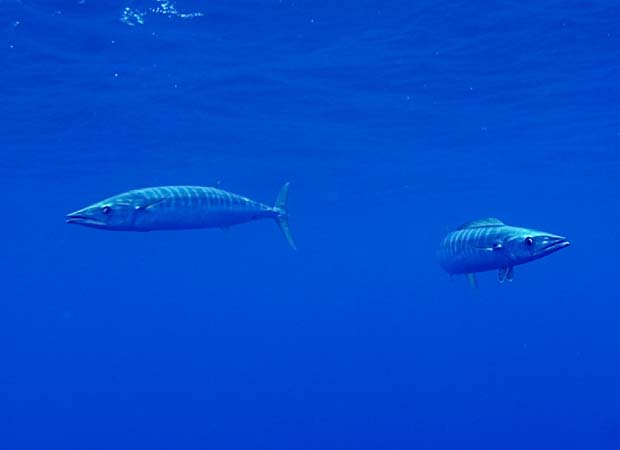 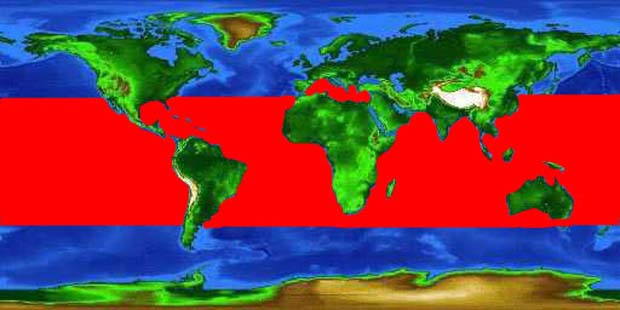 Icthyology Department at the Florida Museum of Natural History

The wahoo is pelagic, living in solitary or forming small, loose aggregations. They congregate near drifting objects including sargassum. Wahoo move with the changing seasons, traveling into cooler waters during warm summer months.

The wahoo is a slender, oceanic fish with a body covered with scales. Jaws are elongated to form an almost beak-like snout; the teeth are triangular and finely serrated. Small scales cover the body. Lateral line runs the length of the body, abruptly curving under the first dorsal fin. A swim bladder is present.

The body is dark blue or green above, with 24 or more wavy cobalt blue bars running vertically along the sides. The belly and lower sides are silvery. 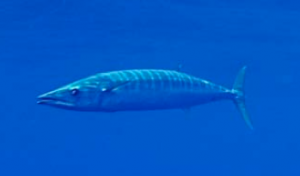 The maximum reported size for the wahoo is 98-inches total length, with a maximum weight of 182-pounds. Typically, individuals attain a size of 39- to 66-inches. After reaching a length of 38- to 41-inches, individuals grow at a rate of 1.2- to 1.5-inches per month. Latitude appears to influence size – increasing in cooler waters. International Game Fish Association (IGFA), the all-tackle record is 184-pounds and on a fly 77-pounds, 2-ounces. Wahoo reach maturity between 1 and 2 years of age and live  5-6 years of age.

Although wahoo are attracted to floating debris, their diet suggests they venture out to forage in open waters. Wahoo feed primarily upon other pelagic fishes, as well as squid. They have been recorded feeding on tunas, little tunny, porcupinefishes, flyingfishes, dolphinfish, jacks, herrings, pilchards, scads, and lanternfishes, as well as many other species. Their fusiform body and great endurance allow them to pursue and overcome prey, which can be readily captured with their strong jaws. Wahoo have been recorded swimming at speeds of up to 47 miles per hour in short bursts, allowing quick capture of prey species.

Spawning appears to occur over an extended period of time, at sites in the Caribbean Sea and near Florida. The simultaneous presence of wahoo at varying stages of maturity may indicate year-round spawning in some areas. In the western central Atlantic, wahoo spawn from May through August with peaks in activity during June and July. An average female may produce 60 million buoyant eggs per spawning. The size of wahoo at hatching is 2.5 mm. Little is known of the early life history of wahoo, however it is known that wahoo larvae are pelagic and prefer shallow water less than 330-feet in depth. 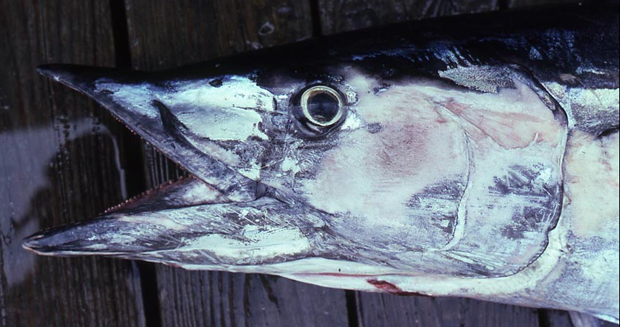 Sharks, including the silvertip shark (Carcharhinus albimarginatus) and other large predatory fish feed on the wahoo.

It is a favored fish for consumption. This fish has been linked to ciguatera poisoning from human consumption of its flesh.

To understand one way to fly fish for wahoo – look for Grant Gisondo Feature story titled What a wahoo day of fly fishing it was.