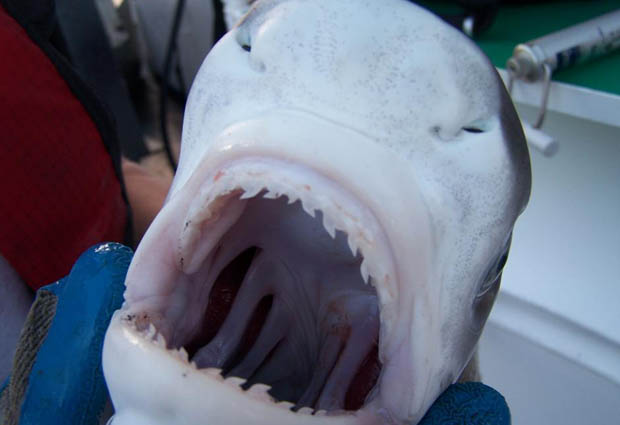 Galeocerdo, cuvier and its common names:

The tiger shark is found throughout the world’s temperate and tropical waters, with the exception of the Mediterranean Sea. It is a wide-ranging species that is at home both in the open ocean as well as shallow coastal waters. Reports of individuals from as far north as Iceland and the United Kingdom have been confirmed but are probably a result of roaming sharks following the warmer Gulf Stream north across the Atlantic. 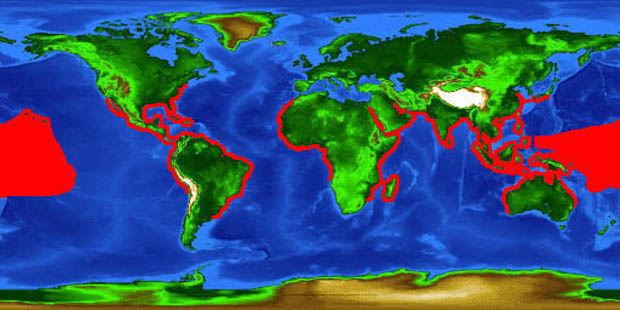 This shark has a notable tolerance for many different kinds of marine habitat but generally prefers murky waters in coastal areas. It is commonly found in river estuaries, harbors, and other inlets where runoff from the land may attract a high number of prey items. Shallow areas around large island chains and oceanic islands including lagoons, are also part of the tiger shark’s natural environment. It is often seen at the surface and has been reported to depths of 1085-feet.

Tiger sharks undergo seasonal migrations. It is well known that they move into temperate waters from the tropics for the warmer months and return during the winter. These sharks also make long oceanic migrations between islands and are capable of traveling long distances in a short amount of time.

Probably the most easy to recognize of the requiem sharks, the tiger gets its name from dark black spots and vertical bars which run the length of the body. The anterior portion of the body is stout but becomes increasingly slender posterior to the abdomen. The tiger shark has a robust head with large eyes and a very blunt snout. The mouth itself is large with long labial furrows. The broad first dorsal fin originates posterior to the pectoral axil. The much smaller second dorsal fin initiates anterior to the origin of the strongly recurved anal fin. A ridge is present along the back between the dorsal fins. A low longitudinal keel is present on the caudal peduncle and the upper lobe of the caudal fin is long and thin with a subterminal notch.

Bluish-green to dark gray or black dorsal surface with a yellowish-white to stark white underbelly. The characteristic dark spots and stripes are most prominent in young sharks and fade as the shark matures. 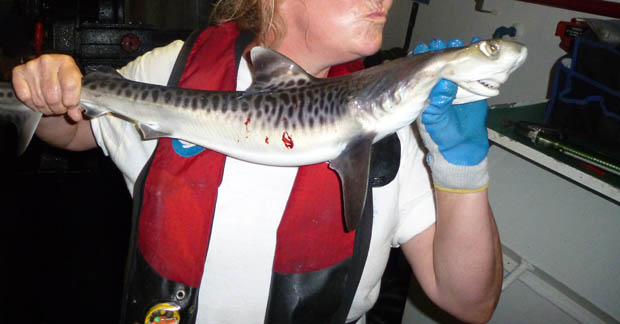 The tiger shark has very distinct dentition. The jaws house large teeth with curved cusps and finely serrated edges. Each tooth has a deep notch on the outer margin lined with numerous cusplets. Upper and lower teeth are similar in shape and size and decrease in measurement as they move back toward the mouth’s corners. 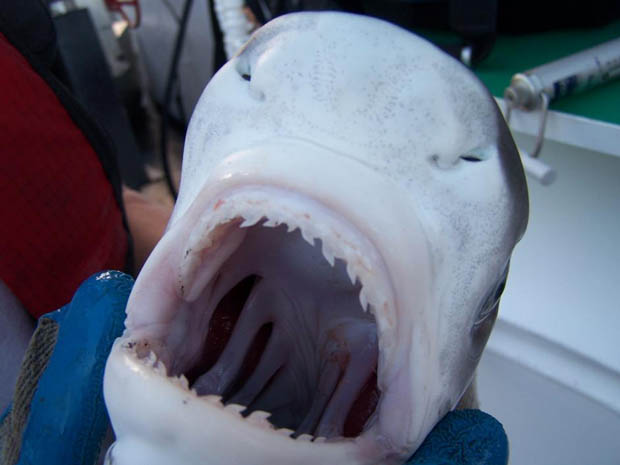 One of the largest sharks, the tiger shark commonly reaches a length of 10-0 to 14-feet and weighs over 850- to 1400-pounds. Length at birth varies from 1- to 1.5-feet. Males reach sexual maturity at 7- to 9-feet, while females become mature at 8-to 10 feet The largest specimens are believed to attain a length of over 17 -feet and weigh over 2000-pounds. 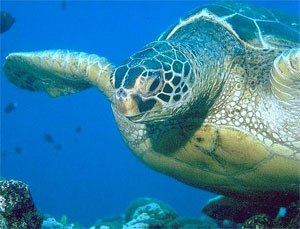 Undoubtedly the least discriminative all species, the tiger shark has a reputation as an animal that will eat almost anything. Preferred prey varies depending upon geographical region but commonly includes sea turtles, rays, other sharks, bony fishes, sea birds, dolphins, squid, various crustaceans and carrion. The tiger shark’s highly serrated teeth combined with the saw-like action from shaking the head back and forth allows it to tear chunks from much larger marine animals. Interestingly, it is not uncommon to find objects of human origin in this animal’s stomach. One large female caught off the north end of the Gulf of Aqaba in the Red Sea contained two empty cans, a plastic bottle, two burlap sacks, a squid, and a 8-inch fish. Garbage and refuse is often recovered from the stomachs of sharks caught in harbors and river inlets where it is commonly dumped into the water. Although far from a natural food item, human remains sometime end up in the guts of these scavenging sharks. Tiger sharks are solitary hunters that feed primarily at night as the shark moves further inshore and closer to the surface. Tiger sharks are sometimes seen in groups of several but this is probably a result of congregations of food items in the vicinity.

The tiger shark is the only species of its family that is oviparous. The gestation period ranges from 14-16 months, at which time a female can give birth to anywhere from 10 to 80 pups. In the Northern Hemisphere, mating takes place between March and May and the young are born between April and June of the following year. In the Southern Hemisphere, it is believed that pupping occurs in November to January. It is believed by some scientists that because of the large size of the young at birth, uterine nutrition is supplemented by ‘uterine milk’ secreted by the lining of the uterus.

Although not targeted directly by the commercial fishery in the US, the tiger shark is routinely harvested for its fins and flesh. In addition, its liver, which tends to have a very high vitamin A content, is used to produce vitamin oil while its thick, tough skin makes for quality leather. Beside its significance to the commercial fishery, the tiger shark is a highly sought after big game fish. 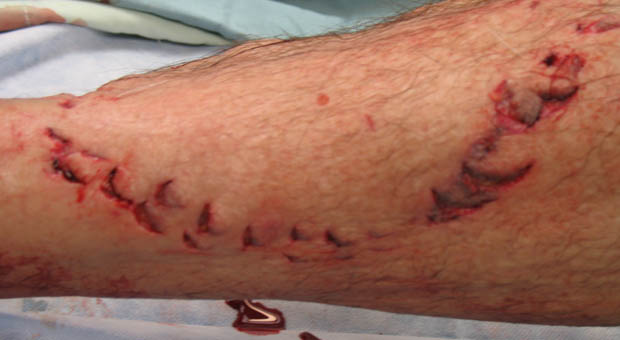 The tiger shark is second only to the white shark in number of reported attacks on humans. Its large size and voraciousness make it a formidable predator in the ocean. Tiger sharks can be curious and aggressive towards humans in the water and must be considered with a great deal of respect.

Both commercial and recreational fishing catch rates for this species in the mid-Atlantic region have declined since the mid-1980’s, indicating that fishing pressure has adversely affected the size of the population. In contrast, relative abundance and catch rates for this species noted by commercial fisheries observers, especially for juveniles, are much higher than in previous fishery-independent and fishery-dependent surveys. The World Conservation Union (IUCN) presently lists the tiger shark as “Near Threatened” throughout its range. The IUCN is a global union of states, governmental agencies, and non-governmental organizations in a partnership that assesses the conservation status of species.

Fishing for sharks or taking an advantage of one showing itself in your window requires heavy, heavy everything and wire. If you’re using an 8-weight and fishing for bones in the Bahamas; forgedaboutit.

You can pursue “sharks” offshore at predetermined GPS coordinates, or over structures and wrecks. These are their natural haunts. All of which will be known by your charter captain. This type of fishing will always require a chum bag and some chunks of fish or a whole fish like a mackerel.

If you really want a thrill, try the flats, but if you’re on foot in the Bahamas casting to bones and a tiger, or any other shark shows up, you’ll be most assuredley out of luck with that 8-weight, 12-foot long leader with a crab pattern tied to 12-pound test. No one we know fishes for bones with a 11-weight, wire bite guard and a bushy 6-inch long orange streamer fly.

While you can get away with a lot with regard to rod and reel used to catch most creatures, you cannot when it comes to big tarpon, sharks and billfish of any denomination. Buy the best 11-weight you can afford and overline it by one, which will take awkward out of the cast by giving your rod better loading characteristics – letting you can cast those huge flies and better perform.

Shark flies have to move a lot of water and have a big silhouette. Orange and orange are the best colors.

Accuracy counts here as well. Cast the fly in front of the shark. Let it encounter the fly and keep on wiggling; erratic is okay. It’s okay if the fly is to the left or right of its nose. Don’t cast behind and bring fly up to its side – nobody likes surprises.

To stick the shark, use the strip-strike – don’t lift the rod. If your strike was a good one the shark will take off like shot from a canon. Clear the rest of your line and let him take drag. Hold the rod tip high to keep coral out-croppings from cutting you off. Let  the good equipment you have, and the guide, work the fish. Don’t become impatient.

Be very careful. At the boat never take your eyes off of its head. A shark is a killing machine and won’t hesitate to bite you. Sharks are cartilaginous and can easily reach back and bite it’s own tail, and do so before you’d be able to release your hold.

Always watch a sharks head – that’s where his teeth are.