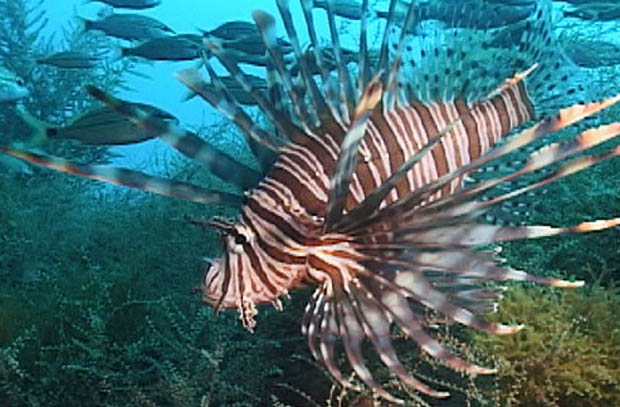 While we’re all just sport fishers in the southeast and gulf states of the U. S.; we do like lobster season. It puts us in the waters we ply with fly or lure at least twice a year. If you’ve got a spare minute while in the brine, look for a lionfish and slaugter it (keep it – they’re delicious). Why? They’re capable of destroying any reef of all its fish. Those reef fish are our gamefish grow-up “ville” and feeding grounds for many adults.

Here’s what’s new. The Florida Fish and Wildlife Conservation Commission has provided us with an app that makes lionfish management a better reality.

[dropcap]E[/dropcap]ver seen or caught an invasive lionfish and didn’t know what to do? There’s an app for that.

Lionfish hunters trying to rid Florida of the aggressive fish’s scourge on the state’s native species have been using the new Report Florida Lionfish app to report their catches and sightings of the invasive fish. The Florida Fish and Wildlife Conservation Commission wants to know where lionfish are spreading, how fast, and how many are being killed.

Since FWC released the lionfish app to the public on May 28, 2014 it has been downloaded by more than 2,500 people.

FWC will use the data collected from the app to help identify sites where targeted lionfish removal might be most beneficial. All data will be available to the public and shared with other groups and agencies collecting similar information.

Lionfish, native to the Pacific and Indian Oceans, have been on a destructive path for decades. The popular, prickly and venomous aquarium fish first got loose in the Atlantic Ocean in the mid-1980s, and more of them may have been released during Hurricane Andrew in 1992. Now, the fish spans waters from the Caribbean to Rhode Island.

Scientists aren’t sure when lionfish came roaring into the Indian River Lagoon, but in 2010, two Florida Tech students spotted several inside Sebastian Inlet. Since then, lionfish have been found inside Port Canaveral. They’ve also been seen in the lagoon proper around seawalls, pilings and worst of all – mangroves, a key nursery for prized grouper, snapper and other commercial species. Hundreds have been found far inland inside Jupiter Inlet.

Last year, Florida made it easier for divers to rid state waters of lionfish and kill as many of the dreaded fish as they can. FWC waived the recreational license requirement for divers harvesting lionfish using certain gear and decided to exclude lionfish from commercial and recreational bag limits.

Then this year, FWC banned importing live lionfish and took several other steps to tame the ferocious fish’s invasion.

The Report Florida Lionfish app includes educational information on lionfish and safe handling guidelines. It also has an easy-to-use data-reporting form so divers and fishermen can share with the FWC information about their lionfish sighting or catch.

Learn more about lionfish at MyFWC.com/Nonnatives; click on “Marine Life.”

In addition to the new lionfish app, information about lionfish sightings or catches can also be submitted online at MyFWC.com/Lionfish by clicking on “Report Lionfish.”

The book provides a unique blend of tantalizing recipes, background on the lionfish invasion and its impacts, and information on how to effectively catch, handle and prepare the fish. I bet you can’t eat one.