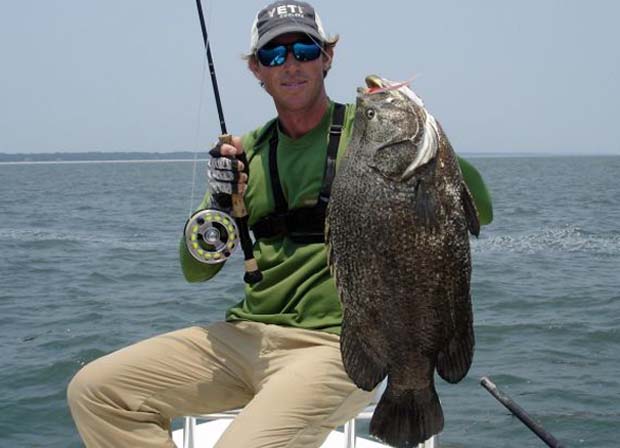 Tripletail (Lobotes surinamensis); a fish that exhibits lazy, but hang on if you get one to eat

Adults inhabit lagoon and seaward reefs at depths of 3- to over 100-feet, and relatively common along shallow reef margins with good coral cover.  Usually solitary. Feed mainly on shelled benthic invertebrates such as mollusks and crustaceans, but occasionally take fishes.

It is a cosmopolitan fish, living in tropical and subtropical seas worldwide. Their range is widespread through the Atlantic, Pacific and Indian Oceans.

They are most often found floating on or near the surface, hanging very near buoys (hence buoy fish or buoy bass), pier pilings or floating debris, or drifting along with currents imitating other buoyant objects. They can also be found lurking around bottom structure such as wrecks.

They can be found in bays, sounds, and estuaries during the summer. Juveniles are usually found swimming under patches of Sargassum, near shipwrecks, or support beams, jetties, flotsam and sea buoys. In the Gulf, adults can be found in open water, but they will also frequent passes, inlets, and bays near river mouths.

The big boys are usually way offshore in open water, but no matter where found they will always be next to floating objects. In the Florida Panhandle waters, spring and fall can be productive times, but inside and outside Apalachicola Bay, August and September can be excellent. The fish can be found near shore, around the sea buoys, and offshore under floating debris.

Stone crab season opens in October and tripletail will usually be hanging on the down-tide side of trap floats. In Florida Bay anglers search for trap floats and when a fish is spotted, circle back and approach quietly to present your fly. 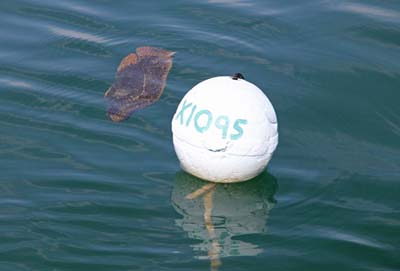 They’ll always be around a floating object – bank on it. Photo credit BoatUS.

This creature is fascinating and a legitamte tussle on a 8-weight fly rod (for sight fishing use a floating line, a reel with a good drag system and you won’t need more than 150-yards of 20-pound test backing).  If fish is 15 or more pounds you’d be better served with a 9-weight, especially if it’s windy and you’re pitching heavy flies. And yes, they’re acrobatic and can perform multiple jumps while engaged. Their runs, although short lived, are powerful. The maximum weight is about 40-pounds and about 3-feet long, but I’ve never caught one over 20-pounds +/- (off the near shore coast of southern Georgia by a buoy).

The same approach is used in Everglades National Park and near-shore park markers off the Ten Thousand Islands. You can blind cast at a marker and get lucky with a fish a few feet under the surface, but I wouldn’t spend more than a few tries at it. Too, you’d need at least 9-weight to manage heavier get-down flies. Use a shock tippet of at least 40-pound mono or floruocarbon because of the razor sharp gill plates. If you’re IGFA rigged don’t go under 15-pound class tippet.

Flies used are streamers – green and white glass minnows, crabs and shrimp imitations with some brown grizzly feathers on the latter. And, as usual, bright flies on sunny days and dark flies on darker overcast day. Up to 1/0.

Approach with stealth and you’ll need to be a good caster – able to hit at least 65-feet or better. The fly should be made to drift into the fish’s window of opportunity so cast considerably away from the targeted prey. When you get an eat, set the hook like bass fishermen do – with zeal. You can hit the thing on the head and get an eat also. Their tendency to follow a fly all the way to the boat, but never eat is perplexing. If this happens, let the fly sit when it follows and if it doesn’t eat right away, pick the fly up. During mating season in the spring and then again in the fall, tripletail become intoxicated and act accordingly. They will attack anything and leap for what seems like no reason – quite something to witness.

When handling be wary of their gill plate covers, they’re razor sharp.

If you fancy fish for a meal, here’s a really good tasting one – maybe better than walleye or snook. Meat is white, fine textured and fillets are superior tasting

Preheat oven to 325 degrees F (165 degrees C). Lightly butter a 9- X 13-inch glass baking dish and set aside. Season the fillets with salt, lemon pepper, garlic powder, and onion powder; place into prepared baking dish. Spread about 2 tablespoons of softened butter over the top of each fillet. Pour in the lime and orange juices, then cover each fillet with 3 slices of lime, and 2 slices of orange. Bake in preheated oven until fish is opaque and flakes easily with a fork, about 20-25 minutes.