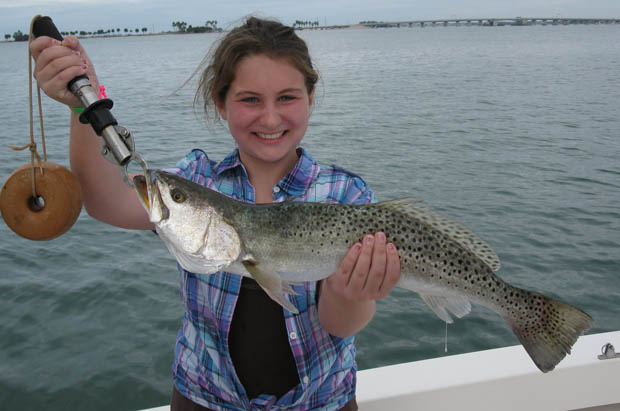 Fishing Saltwater: If you find just “one” spotted seatrout, game on With a range limited to the western Atlantic Ocean, the spotted seatrout is found from Cape Cod, Massachusetts to southern Florida and throughout the entire Gulf of Mexico.

The spotted seatrout is a demersal fish that is found in brackish to marine water. It has been observed in shallow coastal and estuarine waters over sandy bottoms and seagrass to depths of 33-feet. This euryhaline fish (organisms can adapt to a wide range of salinities) also resides in salt marshes and tidal pools of salinities up to 75% (parts per thousand).

During the warm summer months, spotted seatrout associate with seagrass beds, moving to deeper pockets of water in estuaries during the cooler months. They rarely migrate far from estuaries where they are spawned. Spotted seatrout can be distinguished from the weakfish by its distinctive pattern of black spots scattered along the upper body.
© George Burgess weakfish (regalis).

This fish may be confused with others of its genus, especially the weakfish, C. regalis. However, the spotted seatrout has a distinctive pattern of black spots scattered along the upper body and extending into the caudal and dorsal fins. This coloration distinguishes the spotted seatrout from C. regalis and other members of Cynoscion.

The body of the spotted seatrout is silvery with irregular black spots on the upper half, from the dorsal to the caudal fin. The dorsal side is dark gray with bluish reflections while the ventral side is silvery to white. The dorsal fin is dusky while other fins pale to yellowish in color. There is a black margin on the posterior edge of the caudal fin. The upper jaw of the spotted seatrout contains a pair of large canine-like teeth with the lower jaw consisting of an enlarged inner row of closely set teeth. There are no teeth on the vomer, palatines, or tongue.

The spotted seatrout grows to a maximum length of 39 inches (100 cm) TL (total length) and a maximum weight of 17.5-pounds. Males reach sexual maturity at approximately two years of age – 7.9 to 9.4-inches standard length (SL), while females mature at three years of age – 8.3 to 9.8-inches SL. The expected life span of this species is 8-10 years.

Mullet is among the numerous prey items of the spotted seatrout.
© George Burgess Spotted seatrout are a favorite game fish for coastal anglers from Virginia to Texas, and one of the most commonly sought inshore game fish. Mike Holliday is one of the top guides in Southeast Florida for spotted seatrout, and in this book he shares not only his knowledge and experience but that of other top seatrout fishermen as well.

Spawning activity, controlled primarily by temperature and salinity, peaks in the spring and late summer within the Everglades region in Florida. Along the Gulf coast of Florida, spawning occurs from late March to September with a peak during June through August. Unimodal or bimodal spawning activity peaks vary temporally and geographically.

Spawning occurs during the nighttime hours and is signified by the croaking sounds made by males occurring one to two hours before sunset. Shallow bays and lagoons, as well as deeper channels and depressions close in proximity to grass flats, are utilized as spawning locations by the spotted seatrout. Spawning behavior includes a lot of jumping as well as side to side body contact among individuals.

Fecundity increases with size, with each female producing 15,000 to 1,100,000 eggs per spawning event. Spotted seatrout eggs are spherical, measuring approximately 0.70-0.98 mm in diameter, with one to four oil droplets. Eggs are either demersal or pelagic, depending upon salinity. At higher salinities, the eggs are more buoyant but sink as salinity decreases below 25 parts per thousand (ppt). Optimum salinity for a survival of eggs and larvae is approximately 28 ppt.

Larvae hatch about 18 hours after fertilization and associate with bottom vegetation or shell rubble. These newly hatched larvae measure 1.3-1.6 mm in length when hatched in laboratory settings. At 6-8 weeks of age (25-50 mm in length), the young spotted seatrout often forms schools of up to 50 individuals. Juveniles move to seagrass beds, sandy bottoms, muddy bottoms, oil platforms, and shell reefs where they continue to live as adults.

Parasites associated with the spotted seatrout include various isopods, copepods, protozoans, flatworms, and tapeworms. The common worms found in the muscle tissue of seatrout, known as “spaghetti worms,” are the pleurocercoid stage of a tapeworm. Anglers sometimes avoid eating the flesh of infested spotted seatrout. However there have been no reports of any ill effects suffered from eating infested seatrout. The spotted seatrout is considered important in recreational and commercial fisheries in the Gulf of Mexico. Due to their habitat preference for marshes and estuaries, most of these fish are taken in state waters. Limited commercial harvest occurs in the waters of Louisiana, Mississippi, and Florida while this fish has been categorized as a gamefish in Texas and Alabama.

The flesh of the spotted seatrout has excellent flavor and texture for human consumption. It is often utilized fresh for steaming, broiling, and baking. Upon landing of this fish, it should be placed on ice as quickly as possible since the flesh loses quality rapidly if not kept chilled. Landed seatrout often has “spaghetti” worms embedded in the flesh (see parasite section for more information). These worms cannot survive in humans due to its host specificity, so while there is no harm in eating worm-infested seatrout flesh, they can be easily removed during filleting to make it more appealing.

The spotted seatrout is not listed as endangered or vulnerable with the World Conservation Union (IUCN). The IUCN is a global union of states, governmental agencies, and non-governmental organizations in a partnership that assess the conservation status of species.

Prepared by Cathleen Bester: Ichthyology Department at the Florida Museum of Natural History

The best times to catch spotted (speckled) seatrout in shallow water is the Spring and Fall. Trout move into shallow water to spawn from February to May, and that, of course depends on the distance northern-most to southern-most.

A 6-weight will cover you should a bigger snook, baby tarpon, blue or red show-up. While seatrout will crash baits on the surface, the best bet is a fast sinking fly line. Intermediate will just sit mid-column, and your strike scorecard wouldn’t look too good. Seatrout will hit poppers (floating line), but their favorite prey are mullet and shrimp, and unless driven to the surface you’re in the looking mode.

Seatrout will be in 4- to 10-feet of water – moving along seawalls and mangrove perimeter to feed at dawn but are attracted to the lights of the dock at night. Most good fly anglers fishing for seatrout won’t venture too far from a shrimp pattern. Shrimp and mullet patterns work all the way from North Carolina to Texas. As summer approaches, seatrout will start focusing on mullet.

If you’re new to the area, locating seatrout could be your whole week adventure; just looking. Hire a guide with some creds. He or she doesn’t have to be a fly angling expert, but they’ll need to know where to find seatrout. The latter issue, finding seatrout, is the reason why fly fishing for them isn’t as popular as it should be.

Don’t be a noise maker

Seatrout is noted for superb hearing and, as you know, sound travels far in the water. With a boat, it’s best to drift through likely seatrout habitat. A trolling motor is almost mandatory. When wading shuffle, don’t plod.

Mantis Shrimp is a real go to and has universal appeal as do Clouser Deep Minnow and Borski Shrimp Fly.