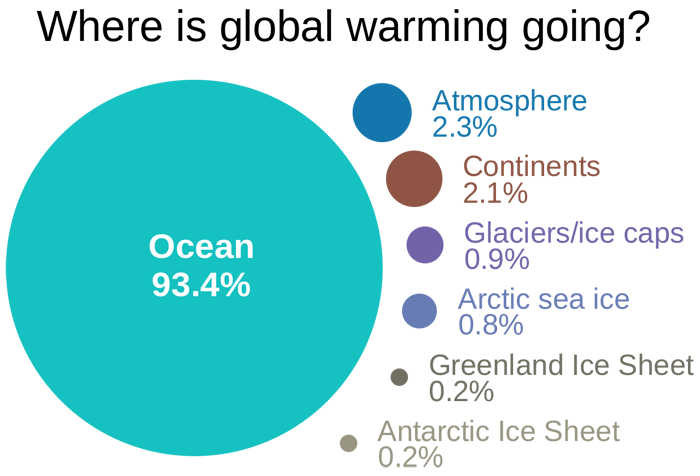 Shows how much energy is added to the various parts of the climate system due to global warming. Source Skeptical Science, vectorized by User: Dcoetzee, a commons image.

Fish populations are declining as oceans warm, putting a key source of food and income at risk for millions of people, according to new research.

The amount of seafood that humans could sustainably harvest from a wide range of species shrank by 4.1 percent from 1930 to 2010, a casualty of human-caused climate change.

“That 4 percent decline sounds small, but it’s 1.4 million metric tons of fish from 1930 to 2010,” said Chris Free, the lead author of the study, which appears in the journal Science.

Scientists have warned that global warming will put pressure on the world’s food supplies in coming decades. But the new findings — which separate the effects of warming waters from other factors, like overfishing — suggest that climate change is already having a serious impact on seafood.

Fish make up 17 percent of the global population’s intake of protein, and as much as 70 percent for people living in some coastal and island countries, according to the Food and Agriculture Organization of the United Nations.

“Fish provide a vital source of protein for over half of the global population, and some 56 million people worldwide are supported in some way by marine fisheries,” Dr. Free said.

As the oceans have warmed, some regions have been particularly hard-hit. In the northeast Atlantic Ocean and the Sea of Japan, fish populations declined by as much as 35 percent over the period of the study. 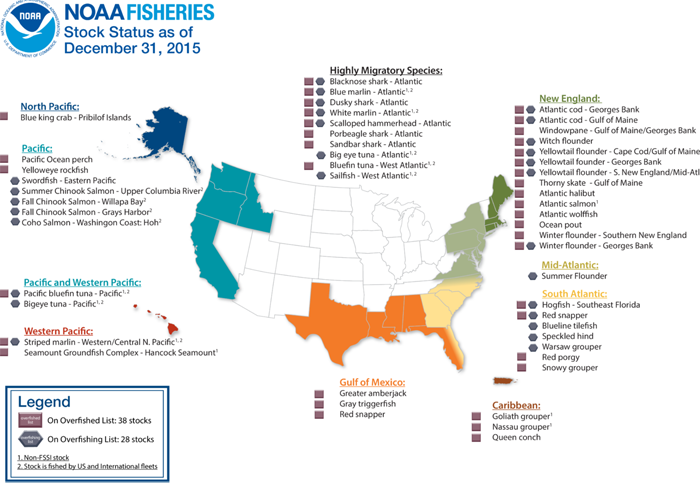 Overfishing dramatically exacerbates the world’s oceans warming faster than anticipated, and It isn’t just “them.” We need leadership to improve our own overfishing impact. NOAA Chart is a commons image.

A separate study, published Wednesday in the journal Science Advances, found that limiting warming to 2.7 degrees Fahrenheit, or 1.5 degrees Celsius, above preindustrial levels — a goal of the Paris climate agreement — could result in billions of dollars in extra revenue for fisheries globally. Much of that would be in the developing world, where many people rely on fish for protein.