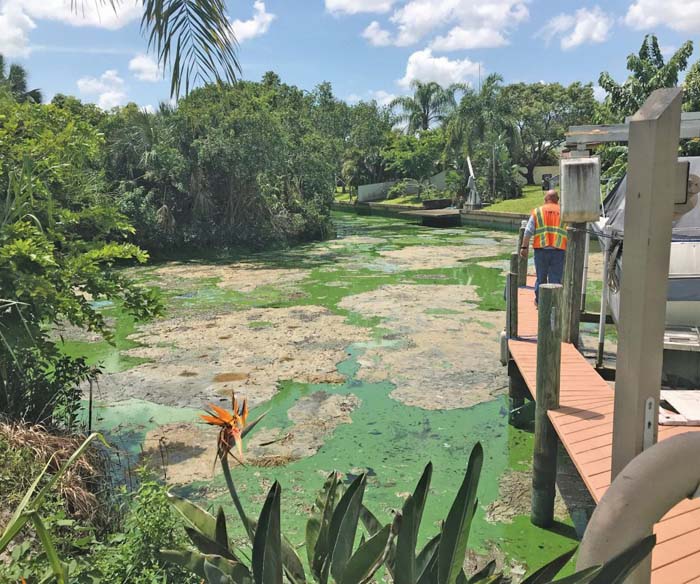 What Do We Know About Toxic Algae?

My 3 million dollar home is now worth WHAT! A Cape Coral canal on August 15 with blue-green algae prior to skimming by AECOM, a Los Angeles-based company mitigating the effects of blue-green algae with a new procedure. Photo by AECOM.

Major Discovery Changes What We Know About Toxic Algae

USGS scientists may have solved a pivotal toxic algae mystery in the Caloosahatchee and St. Lucie (bleeding poison released from Lake Okeechobee) estuaries.

[dropcap]W[/dropcap]hy are cyanobacteria blooms in Lake Okeechobee more toxic when the Army Corps flushes them to the coasts? Why is the microcystis that people boat and fish in on the lake so much more noxious and deadly when it reaches Ft. Myers and Stuart? Fingers have been pointed at leaky septic tanks, local runoff, perfect storms of cyanobacteria blends, or unexplained transformations during the lifecycles of toxic algae.

The answer may be amazingly simple: salt. According to the study, Microcystis aeruginosa–a freshwater organism and the most common cyanobacteria in our toxic blooms–starts to die when it reaches saltwater. And when it dies, it releases microcystins–the cyanotoxin that poisoned dogs on the St. Lucie, was detected in 100% of the Treasure Coast residents tested in a medical study this summer, and was found in the air in Cape Coral and Bonita Springs in a FGCU study this fall.

Basically, cyanobacteria cell walls are like balloons. In freshwater the walls don’t leak, the cells stay healthy, and microcystis can regulate the toxins it releases. In saltwater the walls break down and start to leak, killing the cells, letting their toxins seep out. Or burst out, if it happens suddenly like a popped balloon–or like billions of popped balloons, all at once where the cells hit saltwater, simultaneously releasing all the microcystin inside them, along with BMAAs and other health threats.

The popped balloon analogy could explain why so many dogs in the same spot on the St. Lucie, in the same short time span ran into lethal levels of microcystin. If the discharged cyanobacteria from Lake Okeechobee met a concentration of saltwater near that spot, could a sudden die-off have popped billions of toxic balloons and filled the water with enough microcystin to become deadly?

If so, this discovery changes what we know about the risks of discharges. If the potential for blooms to become lethal explodes when they reach saltwater–exactly where millions of people live and spend time in the water–then intentionally releasing them on coastal communities is appalling. Government agencies have used ignorance as an excuse, claiming water management policies were set before they knew about the health impacts of discharges. Now they know. 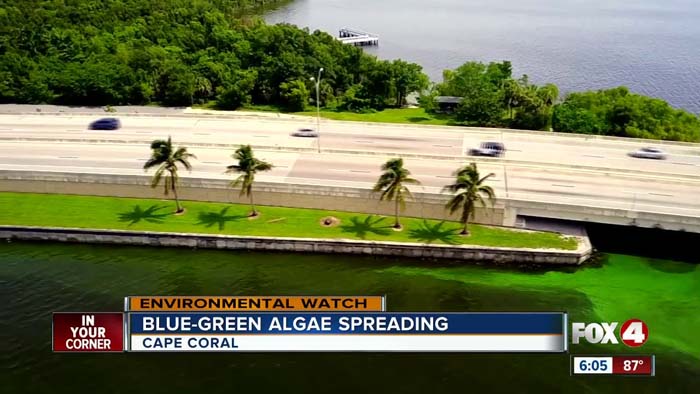 That doesn’t mean they’ll do the right thing. Discharges are still the easiest water management option for Florida’s most influential political power. As long as the sugarcane industry wants the discharges to continue, industry-funded lawmakers and the agencies they oversee will resist changes.

Sometimes, even amid deadly serious revelations about how people are being poisoned, the proposals to keep doing it are almost funny. This week’s example: Instead of cutting the discharges, increase them so much that the naturally brackish estuaries become freshwater. And then manipulate salinity levels (something so delicate and precise that scientists called it “threading the needle”) to pop the toxic balloons at exactly the right time and place, sparing at least some of the people in coastal communities from the full burst of toxins they get now.

The idea might sound laughable, but probably not to the people who don’t get spared. It’s a safe bet that they’d rather just keep toxic discharges away from their communities altogether.

P.S. THANK YOU!!!! The generosity of Bullsugar.org supporters on Giving Tuesday was humbling and inspiring. If you missed the opportunity to be part of Florida’s clean water future, please help by becoming a Bullsugar member today.