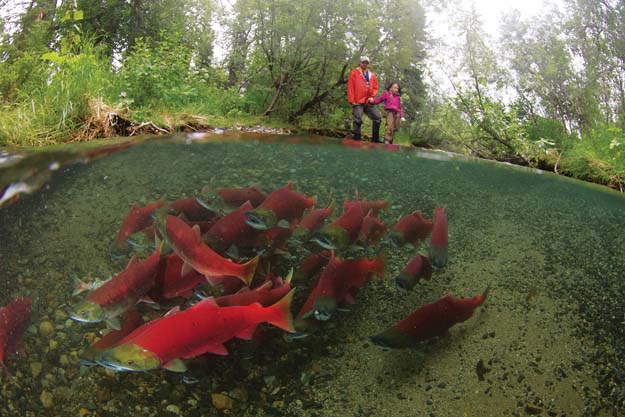 When they pollute, your taxes may end up paying for the cleanup Threatened by foreign mining interests. Thousands of salmon converge at the mouth of a tributary stream in Lake Beverley’s Golden Horn, just above Lake Nerka, for the final ascent to their spawning sites. Johnny Armstrong / High Country News. Click on image to visit High Country News.

[dropcap]T[/dropcap]he Trump administration announced Friday that it won’t require mining companies to prove they have the financial wherewithal to clean up their pollution, despite an industry legacy of abandoned mines that have fouled waterways across the U.S.

The move came after mining groups and Western-state Republicans pushed back against a proposal under former President Barack Obama to make companies set aside money for future cleanup costs.

The U.S. mining industry has a long history of abandoning contaminated sites and leaving taxpayers to foot the bill for cleanups. Thousands of shuttered mines leak contaminated water into rivers, streams and other waterways, including hundreds of cases in which the EPA has intervened, sometimes at huge expense.

The EPA spent $1.1 billion on cleanup work at abandoned hard-rock mining and processing sites across the U.S. from 2010 to 2014.

Since 1980, at least 52 mines and mine processing sites using modern techniques had spills or other releases of pollution, according to documents released by the EPA last year

In 2015, an EPA cleanup team accidentally triggered a 3-million gallon spill of contaminated water from Colorado’s inactive Gold King mine, tainting rivers in three states with heavy metals including arsenic and lead.