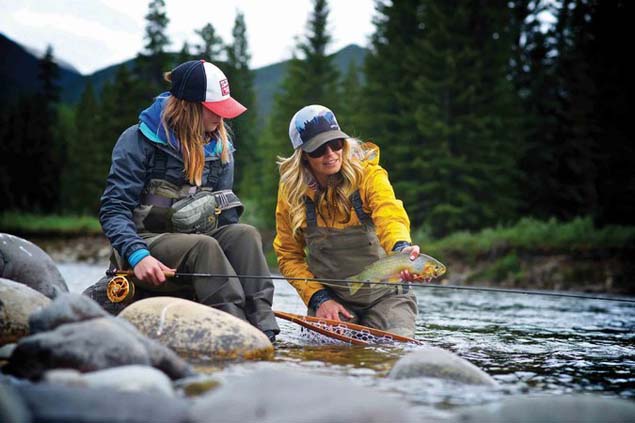 Fly Fishing Targets Women as a Source for Growth

They are the fastest growing demographic in fly fishing but have to find proper gear, navigate social media and plan self-defense in the outdoors

[dropcap]W[/dropcap]omen are now the fastest growing demographic in fly-fishing, one of the most male-dominated outdoor sports. That has presented a host of challenges, including finding proper gear, navigating the pitfalls of social media and even developing an awareness for self-defense skills in the outdoors.

Industry leaders say women are the only growing demographic in the sport, which is why they are so crucial to cultivate. Women make up about 31 percent of the 6.5 million Americans who fly-fish, according to the most recent study by the Recreational Boating & Fishing Foundation. In 2016, more than two million women participated in the sport, an increase of about 142,000 from the previous year.

A new initiative, begun over the summer and led by the equipment and apparel company Orvis, in partnership with Simms, Costa, and Yeti, has among its objectives the goal of an even gender split in fly-fishing by 2020. Next spring, the program will expand to offer outreach events to educate women on gear choices, selection and function; plan classes to build skills and confidence on the water; and arrange mentoring opportunities for future female guides, shop employees and industry leaders.

DUN, a quarterly magazine dedicated to women and fly-fishing, began online in 2013 and printed its first edition this year. Jen Ripple, the magazine’s editor, called the sport “empowering.” Camille Egdorf, a guide with Yellow Dog Flyfishing Adventures in Bozeman, said women working as guides — and women hiring their services — were becoming more common. Sometimes, she said, those trips can prove the most rewarding.

Egdorf gave as an example a guided fishing trip with a veteran angler husband and his wife, a novice. She gave tips on ways to fish the river and to slow down the back cast. The husband ignored Egdorf, but the wife listened and had a more productive day, catching five fish for every one he caught.

“He had a pretty rough day because he didn’t listen,” she said. “It happens all the time: The wife outfishes the husband, and it drives the husband nuts.”

For the guide April Vokey, the challenge was not finding the right gear, but buying it. She was among several female anglers who said a big hurdle was the men who work in fly shops.

“When I would go get gear, I was immediately met with a problem,” Vokey said. “Even when I became successful, they still made it really hard on me.”

Bart Bonime, Patagonia fishing director said fly shops could be intimidating for women. Women don’t want to feel pandered to. They don’t like walking into a fly shop and being looked at like they’re lost.”

Bonime has a simple solution: Fly shop employees should greet customers, make sure the bathroom is clean, and have female employees and a full-length mirror. “When you walk into your fly shop, you have some grizzled-haired kid behind the counter drinking a PBR,” he said. “It’s not a welcoming environment.”

Egdorf added: “Women that feel they need to show a lot of skin in order to get a following is frustrating. It sends the wrong message. But people see through that pretty quickly — the girl holding up a fish in her bikini with her nails all done and makeup on and her hair perfect. People see what’s authentic and what’s not.” She has had positive experiences with more traditional social media efforts.

Egdorf was recently featured in a video for Yeti titled “Odd Man Out.” The video describes her upbringing at her parents’ fishing guide service in Alaska, her workout routine and her experiences as a guide.

The challenges women face while fishing were discussed during the annual Trout Unlimited meeting this fall in Roanoke, Va. When the subject of self-defense came up, several women made suggestions on ways to protect themselves from predators, both human and wild: Use a whistle, carry pepper spray, fish in groups, carry a gun, or take a basic self-defense course.

Jackie Kutzer, a guide for Orvis and one of the architects of the new initiative, said, “You don’t want every woman on the river strapped with a gun, but these are the kind of issues that are coming up and we need to address them.”