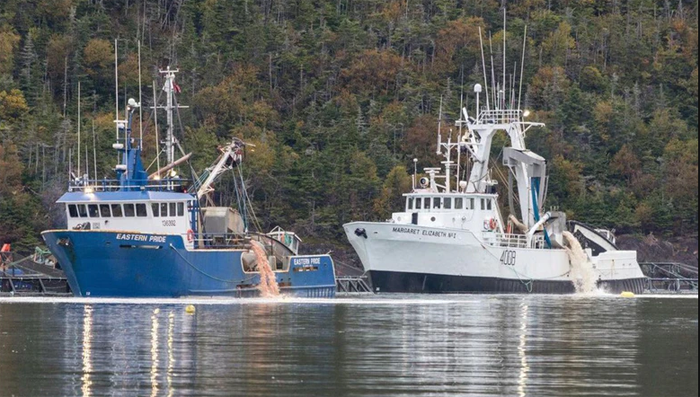 Millions of dead fish, plus the effluent water from recovery, with macerated salmon and oils, spewed into Fortune Bay, Newfoundland, Canada. Photo by Atlantic Salmon Federation’s Bill Bryden. Fortune Bay is a fairly large natural bay located in the Gulf of St. Lawrence on the south coast of Newfoundland.

The Atlantic Salmon Federation estimates about 1.8-million salmon were affected in the mass die-off on the south coast

[dropcap]D[/dropcap]irector of Programs with the ASF, Don Ivany says they have yet to hear anything ‘official,’ but they place their estimates at about 9,000 tonnes of rotting salmon. That translates into about 1.8-million fish in 72 net pens across a 30-kilometre section of shoreline on the south coast. As comparison, the average blue whale can weigh as much as 200 tonnes.

Dr. Ian Jones expresses concerns on the impacts of salmon cleanup debris on intertidal organisms and inshore birds. He calls this the greatest water pollution event in Newfoundland history.

Ivany says they’ll have to wait and see what numbers are released. However, based on a full week exploring the affected area in a boat, he calls those numbers an “underestimate.” He says it will be difficult to ever get an exact number.

As Northern Harvest works to remove the mortalities from their sea pens, pink-coloured water could be seen being pumped back into the ocean. Ivany claims that is caused by fish being disintegrated by the pressure of the water, as they were in such an advanced state of decay.

He says all of the organic material dumped into the water leads to nutrification and algae blooms—both of which strip oxygen from the water. He says you also get changes to the ecology with a lot of microscopic organisms beginning to feed on it, leading to the whole ecosystem being changed.

The Atlantic Salmon Federation believes a public investigation needs to happen. VOCM News has reached out to Northern Sea Harvest for response.

Join the Atlantic Salmon Federation and learn more about the KING of FISH. . .