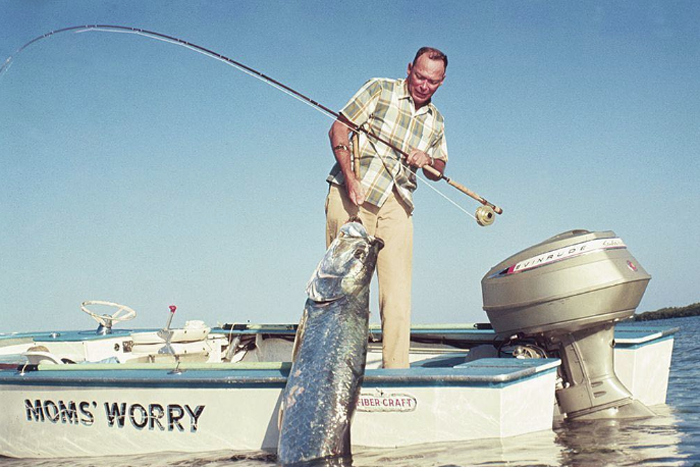 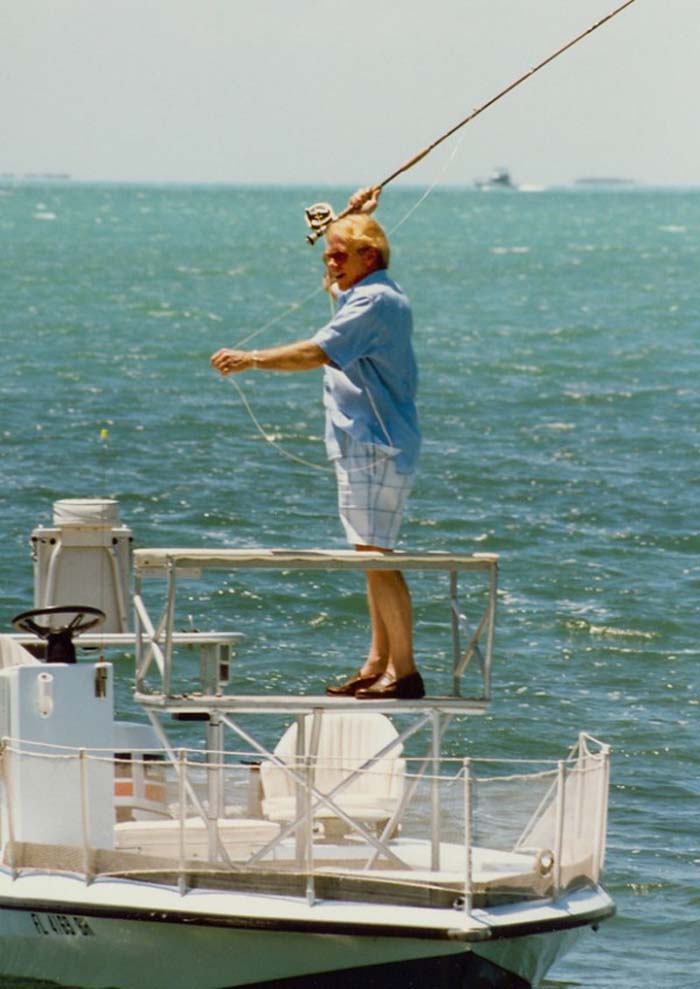 Billy Pate working his magic – note the casting platform arrangement he had built. Check out the attire. Photo courtesy of Don Reed.

By Nick Roberts, Director of Marketing & Communications / Miami, Florida / May 15, 2019

[dropcap]S[/dropcap]tu Apte and the late Billy Pate have been named inaugural inductees in the Bonefish & Tarpon Trust Circle of Honor, which recognizes legendary anglers, fishing guides and conservation leaders who have made significant contributions to the conservation of the bonefish, tarpon and permit fisheries.

A Navy fighter pilot during the Korean conflict, Stu Apte went on to fly for Pan Am for 34 years, while pursuing his passion for fishing. He began fly-fishing in the mid-1940s and, by the mid-1950s, was guiding part-time in the Florida Keys from his home on Little Torch Key. Following a Pan Am layoff in the 1960s, Apte began work as a full-time guide. Over the years, he has held more than 40 saltwater and fly-fishing world records. A tireless and vocal advocate for the conservation of our flats fisheries, Apte is a founding member of BTT and serves on its Board of Directors.

Best known for one of his long standing tarpon world records, celebrated angler Billy Pate, who passed away in 2011, fished throughout Florida and around the globe. He was the first angler to catch all four species of marlin on a fly rod, and in 1982 caught a 188-pound tarpon on fly with a 16-pound tippet, a record that would stand for 21 years. Also an innovator, Pate worked with Ted Juracsik of Tibor Reels to develop a revolutionary line of fly reels that bear his name. Pate was a BTT founding member and honorary trustee, known for his advocacy on behalf the organization and steadfast support of its mission.

It’s fitting that these two legends are the first in the angler and guide category to be enshrined in our new Circle of Honor,” said BTT President and CEO Jim McDuffie. “As legends of the sport, they’ve influenced the conservation of our flats fishery and helped build BTT as an effective organization capable of pursuing its mission into the future.”

The Circle of Honor will be prominently housed in the Florida Keys History and Discovery Center, located in Islamorada, Florida, and will feature an annually rotating exhibit on those honored as well as educational content about the significance of the flats fishery. The inaugural inductions will take place during a special dinner and awards ceremony on January 16, 2020, at the center.

Through the years, Stu has held more than 44 saltwater light tackle and fly rod World Records, including the two longest standing saltwater fly rod records. A 58-pound dolphin caught in 1964 and a 136-pound Pacific Sailfish caught in 1965, both on 12-pound tippet. Image.

Keys History & Discovery Center is a world-class museum that preserves and shares the incredible history of our Upper Keys community and explores the unique ecology of the region. In addition to permanent exhibits on subjects such as Henry Flagler’s Over-Sea Railway, Legends of the Line, and First People, the Discovery Center offers a lecture series, educating the public through presentations from a variety of expert speakers. The museum’s second floor features a state-of-the-art theater showing documentaries on topics like the 1935 Labor Day Hurricane and Indian Key, as well as traveling exhibits, and the Jerry Wilkinson Research Library. The center, on the property of the Islander Resort, is open Wednesdays through Sundays, 10 a.m.-5 p.m.

Florida Keys History and Discovery Foundation formed in 2013 to develop and operate Keys History & Discovery Center. The not-for-profit organization’s board of directors is comprised of community-minded volunteers with a passion for the mission of preserving and sharing the unique history and environment of the Florida Keys, particularly that of the Upper Keys. More information can be found at www.keysdiscovery.com or by calling 305-922-2237.