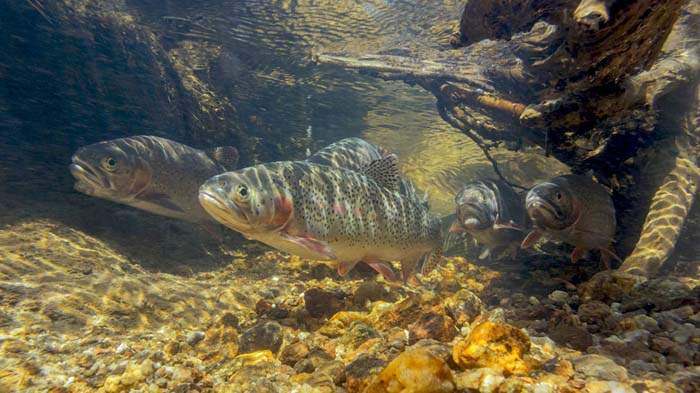 The greatest success story of the Endangered Species Act

Greenback Cutthroat Trout (Oncorhynchus clarkii stomias) lurk under the protective branches of a tree root eroded away by the swift current of their annual spawning stream. Image taken in the Neota Wilderness Area of Colorado. Photo credit Colorado Parks & Wildlife.

Recovery: The Once and Future Greenback Cutthroat Victory 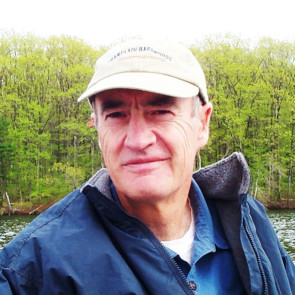 Ted Williams detests baseball, but is as obsessed with fishing as was the “real” (or, as he much prefers, “late”) Ted Williams. What he finds really discouraging is when readers meet him in person and still think he’s the frozen ballplayer. The surviving Ted writes full time on fish and wildlife issues. In addition to freelancing for national publications, he serves as national chair of the Native Fish Coalition. More from Ted.

[dropcap]C[/dropcap]utthroat trout, so-named because of the red, pink or orange markings under their mandibles, evolved in the Pacific Northwest, Rocky Mountains and Great Basin.

The large, piscivorous yellowfin cutthroat, probably restricted to the headwaters of the Arkansas River, is extinct. And the Alvord cutthroat, native to streams in the Alvord basin in Oregon and Nevada, is presumed extinct, though fish with Alvord characteristics persist in Oregon.

The yellowfin and Alvord were victims of genetic swamping by non-native rainbow trout flung around the landscape like confetti by fish managers and anglers in the days when “a trout was a trout” and rod bending was perceived as the function of gamefish.

None of the extant pure cutthroats has suffered more than the greenback, the easternmost subspecies, native to the South Platte basin. In fact, it was considered extinct until 1969 when Dr. Behnke announced that he’d found survivors in tiny Como Creek on the Roosevelt National Forest, isolated from genetic contamination and presumably stocked by pioneers.

It was nearly as exciting for native-fish advocates as the alleged rediscovery of the ivory-billed woodpecker was for birders.

In 1973 the greenback was listed as endangered

To remove non-native trout, streams were treated with chemical piscicides (antimycin, which is no longer available, and rotenone). And fish cultured from the Como Creek population (and subsequently discovered populations) were introduced.

Greenbacks were downlisted to threatened in 1978, a political but intelligent decision that allowed catch-and-release angling, a prerequisite for the avid public support that followed.

In 2005, the Colorado Division of Wildlife (now “Parks and Wildlife”) reported that greenbacks had been reestablished in 58 streams and lakes of Rocky Mountain National Park and surrounding national forests.

Four years later Bruce Rosenlund of the U.S. Fish and Wildlife Service told me this: “The recovery goal was 20 populations. We’re well above that, probably over 60 populations now.”

The downlisting decision was paying off, he said. Anglers were pouring into the park to fish for “greenbacks,” which were attaining lengths of 18 inches and doing far better than the scrawny, alien brook trout.

Delisting was imminent. Greenback cutthroat recovery was touted by the environmental community and media as the greatest success story of the Endangered Species Act. No writer was more effusive than I.

A Case of Mistaken Identity?