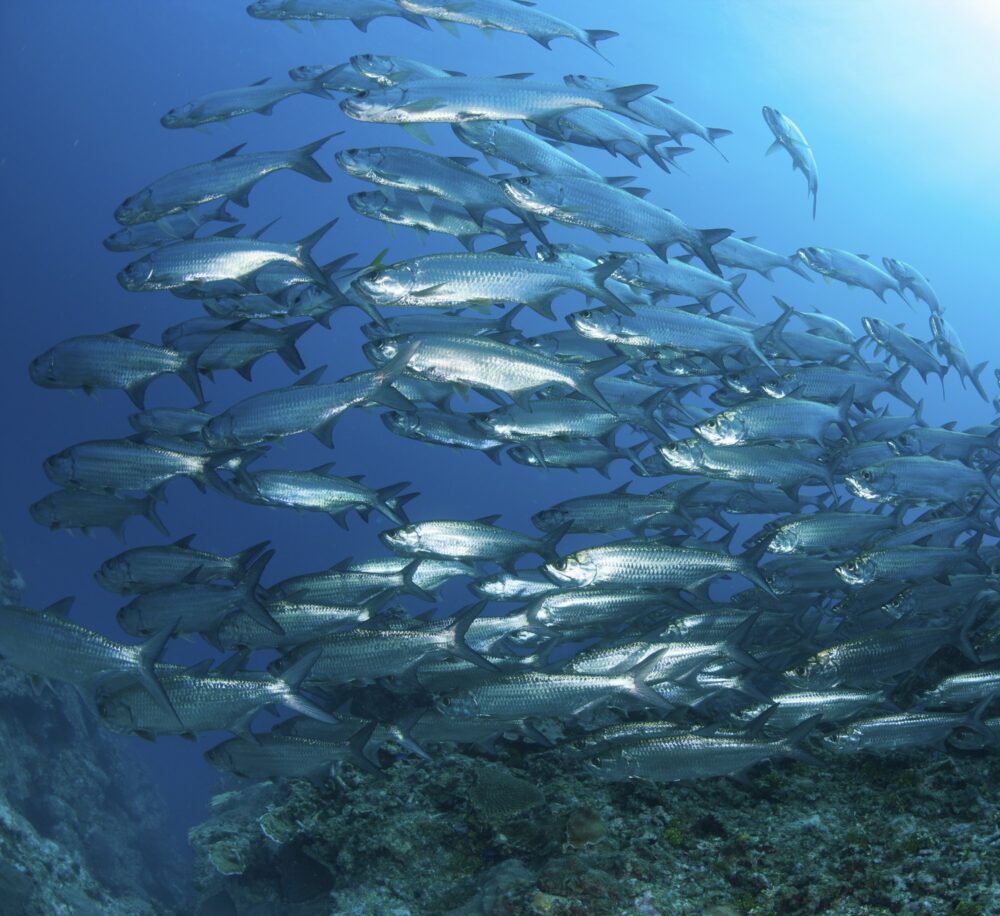 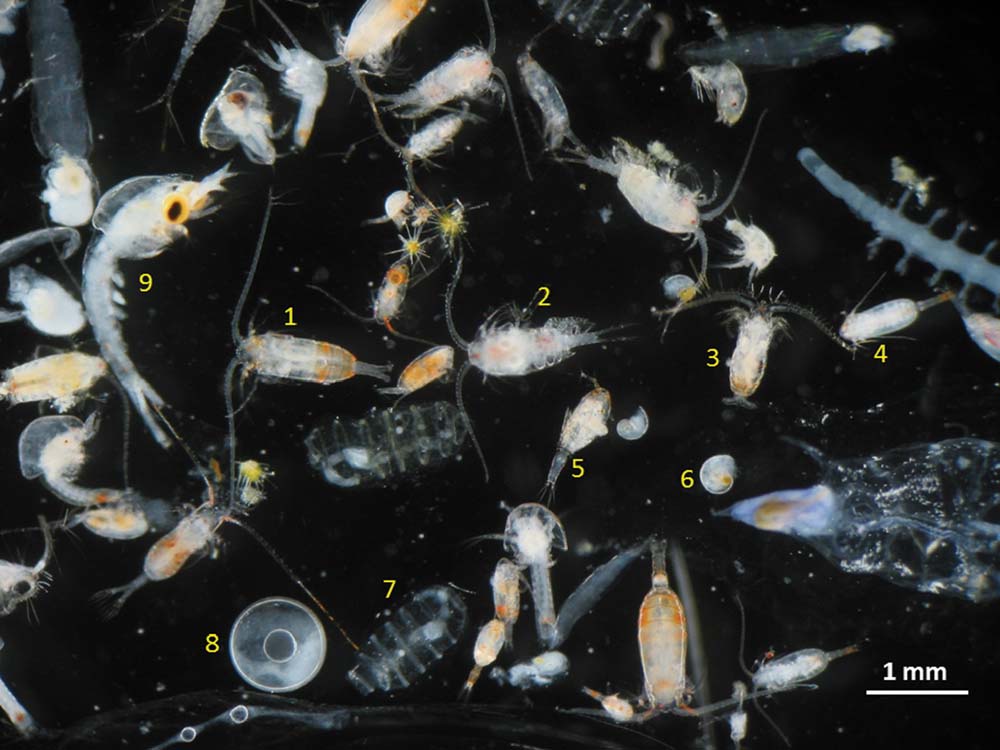 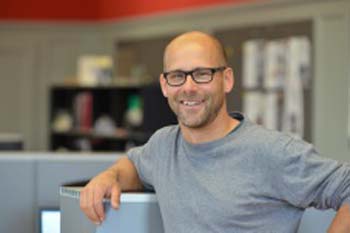 Peter Rüegg studied Biology at ETH Zurich with focus on Ecology, Phytogeography and Biosystematics. After completing his studies he worked as freelance ecologist, amongst others, field-​mapping breeding birds at the ornithological station Sempach. He started his journalistic career in 1997, first writing for local newspapers in Winterthur, later for Neue Luzerner Zeitung. Between 2002 bis 2005 he served as media relations responsible for Pro Natura, before joining Corporate Communications as scientific editor in August 2005. He is working on the Content team.

Ocean warming caused by anthropogenic greenhouse-​gas emissions will prompt many species of marine plankton to seek out new habitats, in some cases as a matter of sur​vival. ETH Zurich researchers expect many organisms to head to the poles and form new communities – with unforeseeable consequences for marine food webs.

The ocean is teeming with microscopic plants and animals known collectively as plankton. Each individual organism is tiny, yet, taken as a whole, this free-​floating community delivers important ecosystem services. For example, plant-​like plankton, or phytoplankton, use photosynthesis to fix carbon from carbon dioxide, making them a key driver of the oceanic carbon cycle. Phytoplankton are also a food source for zooplankton, which, in turn, nourish fish and marine creatures up to and including the blue whale.

As the climate heats up and ocean temperatures rise, researchers expect to see significant changes in plankton distribution. Yet there are hardly any studies investigating where different species of plankton might thrive in the future.

Part of this knowledge gap has now been filled by a research team led by Fabio Benedetti and Meike Vogt, the former a postdoctoral researcher and the latter a senior scientist in Nicolas Gruber’s group at ETH Zurich, in collaboration with colleagues from the Swiss Federal Institute for Forest, Snow and Landscape Research (WSL).

The project team put together a new global dataset to create distribution maps for more than 860 species of phytoplankton and zooplankton based on various statistical algorithms and climate models. They then overlaid these maps to determine what plankton communities might look like in the future and where they might occur. The results of their work were recently published in the journal Nature Communications. 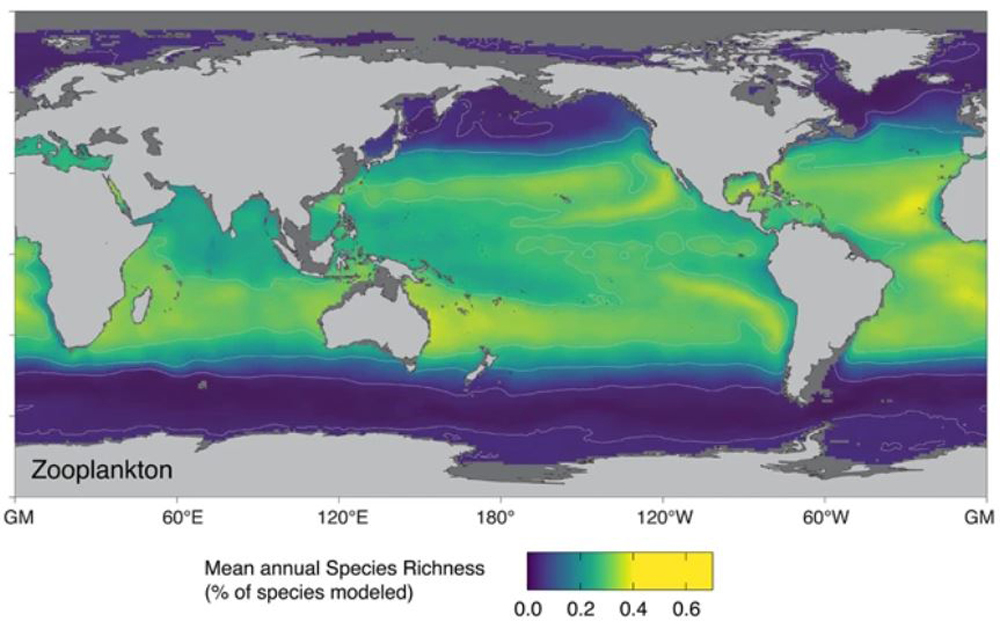 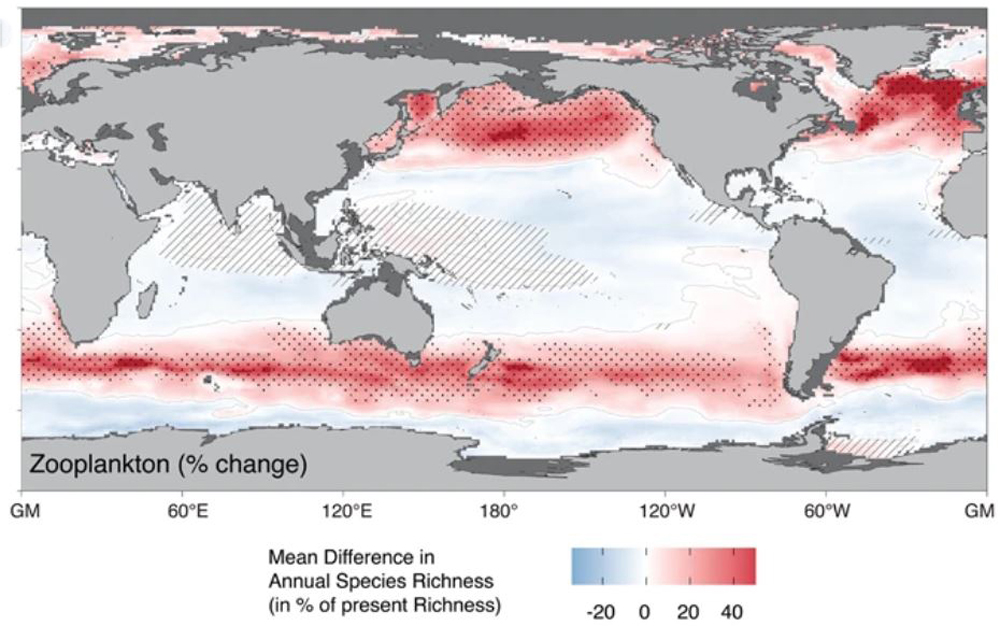 In subpolar seas, the number of zooplankton species could increase by up to 40 per cent in 2081-​2100, but decrease in tropical oceans. (from Benedetti et al, Nat Commu, 2021)

Benedetti and his colleagues showed that the diversity of both phytoplankton and zooplankton can be expected to increase in the future across many regions, because warmer water generally tends to promote greater diversity.

Plankton species from the tropics and subtropics will shift polewards and replace species that are adapted to cooler waters. This will give rise to numerous new communities that have never existed in these combinations before, a convergence of species that do not currently occupy the same habitat and whose interrelationships are not clearly aligned.

Researchers expect the biggest changes to occur in oceans at high and temperate latitudes – precisely those regions that are crucial for CO2 fixation and fisheries.

“In some areas of the ocean, we will see a rise in species numbers that may, on the face of it, seem positive. But this boost in diversity could actually pose a serious threat to the existence and functioning of well-​established marine ecosystems at higher latitudes,” says lead author Benedetti.

Marine ecosystems at high and mid-​latitudes are currently dependent on species-​poor plankton communities. The size distribution of plankton organisms also has an important influence on the quality of the ecosystem service.

To determine whether these factors change when plankton communities and thus their size distributions change, the researchers simulated the effects of climate change on the size structure of two important plankton groups, the diatoms and copepods. Data on the size of individual species is available for these organisms.

Using the simulations, the scientists demonstrated that the quality of the habitat increases for smaller organisms, while it decreases for the larger ones. Therefore, plankton communities could change, so too do the relative proportions of small and large species: smaller organisms become more abundant and numerous, especially at high and temperate latitudes, while larger organisms decrease in number.

Size structure has an impact on marine ecosystem services

According to the researchers, this will affect the ecosystem services that plankton provide: if changes occur in the plankton’s species composition and size structure, this could have a negative impact on the ecological pyramid and thus on fish yields.

Plankton also play an important role in oceanic carbon fixation. Some of the carbon fixed by phytoplankton sinks to the deep ocean and is effectively removed from exchange with the atmosphere.

For example, the Arctic Ocean is currently home to phytoplankton that are larger than those in tropical seas. Many of these have shells, and their excretions are also larger and heavier. As a result, both dead organisms and their excrement sink faster and to greater depths before the carbon they contain is decomposed back to CO2. Dissolved in deeper waters, this CO2 remains trapped in the depths for long periods of time due to density stratification and the slower circulation of the deep ocean.

If smaller species replace larger ones, this transfer of carbon to the deep ocean will decrease.

However, scientists cannot say exactly how significant these effects will be. “The only thing we can determine right now is how important certain areas of the ocean are today in terms of different ecosystem services and whether this provision of services will change in the future” Benedetti says.

Will there be a regular migration of tarpon to Saint Lawrence Seaway? Will pirana spawn in San Diego? Envato image

Scientists have been observing shifts in plankton distribution since the Researchers have been observing that the distribution of plankton is shifting for several decades. The first systematic monitoring programme, the so-​called Continuous Plankton Recorder (CPR), began in the North Atlantic in the 1930s. With the help of the CPR data, other researchers have recently been able to show that smaller copepods have displaced the larger species in the North Atlantic since the 1950s due to climate warming. This has also reduced the sequestration of atmospheric CO2 in the deep sea.

Jellyfish, another type of zooplankton, are also migrating northwards. In 2005, Ireland detected a huge influx of tropical jellyfish, which devastated salmon farms along the coast. “Events like this show that shifts in plankton distribution are already well underway,” says co-​author Meike Vogt.