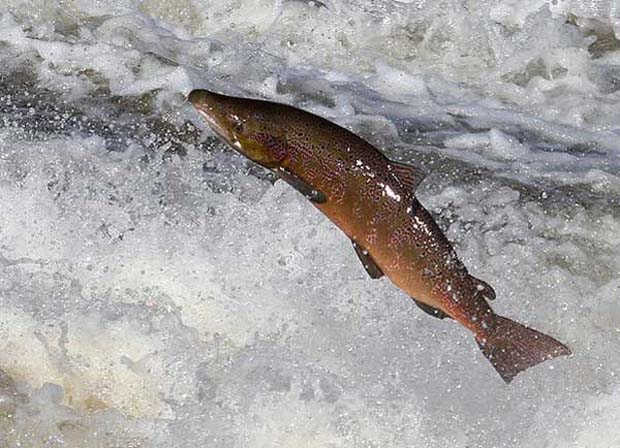 Lessons for a world demanding energy

[dropcap]F[/dropcap]or millennia, Atlantic salmon made an annual appearance in Maine’s Penobscot River, swimming into its mouth from the ocean, surging as a crowd up its main-stem, and then scattering throughout its thickly forested basin to spawn in the cold gravels of its rivers and streams.

Then, 100 years ago, a series of hydropower dams were built on the river that blocked the salmon migration; their annual appearance nearly sputtered out. The salmon could make it past one dam — sometimes, when the flow was right — and maybe two. But three, four, and more dams proved too much.

And so, while a remnant population of salmon would return to the lower river, most of the basin had lost these magnificent visitors — culturally as well as ecologically important.

But recently, another creature has begun to make annual appearances in the Penobscot. And in a surprising example of symbiosis, their presence and activities appear likely to rejuvenate the Penobscot’s historic salmon run.

Each summer, they emerge from the forest, large and yellow. And with a shuffling, halting gait they work their way out into the river. With long swinging necks and a powerful head, they chip away and eventually tear apart the dams that have blocked the salmon.

No, brontosaurs along the Penobscot aren’t the latest Lazarus taxon to be discovered. But last summer, huge demolition machines rolled into the river and removed the Great Works Dam. And starting a few weeks ago, the machines began to take bites out of the Veazie Dam.

Upstream, two other dams will remain. But their antiquated (and generally ineffective) fish passage structures will be replaced with state-of-the-art solutions — one of which will be essentially a tumbling stream that meanders around the dam, connecting the river above and below.

After all of these projects are complete, salmon will have access to approximately 1,000 more miles of river and stream to spawn. Fish biologists predict that the Atlantic salmon run in the Penobscot — still the largest in the United States, which says a lot about the status of wild Atlantic salmon in this country — will increase from a few thousand to 12,000.

And not just salmon will benefit. The Penobscot is home to 11 additional species of migratory fish, including sturgeon, eel, and alewife. Atlantic shad are projected to increase from a few thousand to a few million.

In other words, from the perspective of fish, the basin will be transformed.