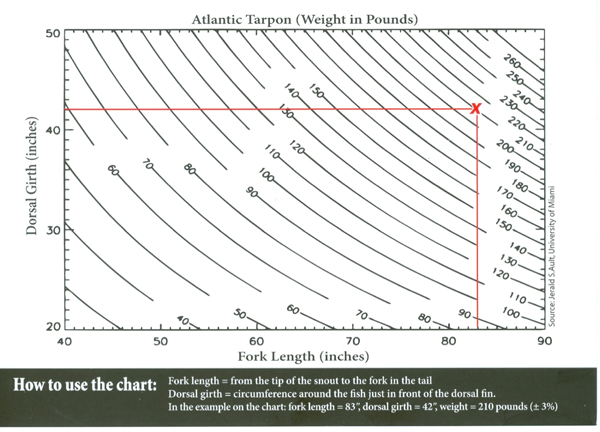 Two fisheries scientists from the University of Miami Rosenstiel School came up with a new, accurate and non injurious way to accurately determine the weight of your tarpon catch.

A waterproof chart can be ordered at the Bonefish & Tarpon Trust.

[dropcap]S[/dropcap]ue cocking (Miami Herald) wrote (01/20/13): “In an article just published in the scientific journal Fisheries Research, authors Jerry Ault and Jiangang Luo (University of Miami Rosenstiel School) lay out a mathematical model that uses a tarpon’s length and girth measurements to make a reliable calculation of weight without having to remove the fish from the water.”

Tarpon help support a $6 billion sport fishing industry in Florida, the Gulf of Mexico and Southeastern United States. Although tarpon tournaments in the Keys have rules requiring minimal handling of fish, some contests in Mexico and elsewhere still allow anglers to hang dead fish up on scales. In southwest Florida’s Boca Grande Pass, the Professional Tarpon Tournament Series remains barbaric – encouraging contestants to drag large, live fish by a lip gaff to be weighed in a sling-type scale before release. 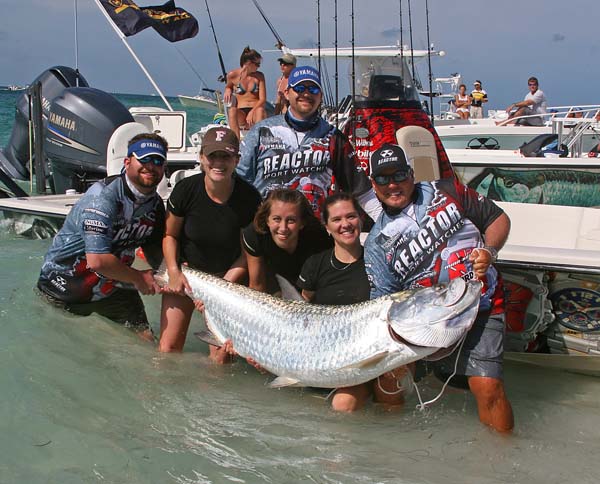 The ignorant perform and tarpon will die.

The non-profit Bonefish Tarpon Trust provides waterproof cards with the algorithm, similar to scuba diving tables, for those who don’t have the app.

In the journal article, Ault and Luo describe the dismay of a fly angler in Belize who caught a really big tarpon, used the old method to estimate its weight, determined it wasn’t heavy enough for a tippet-class world record, and released it without documenting the catch. When the fisherman later plugged the measurements into the Ault-Luo formula, he found the fish would have been eligible for an IGFA world record.

Ault and Luo based their findings on a sample size of 1,400 tarpon from throughout their range — Florida, the Caribbean, the entire Gulf of Mexico and Africa.

Ault said he believes the formula can be used to estimate weights of other species, such as billfish, tunas and bonefish.

Order your own water-resistant card from the Bonefish & Tarpon Trust – with the fork length + girth = weight graph by emailing bob@tarbone.org