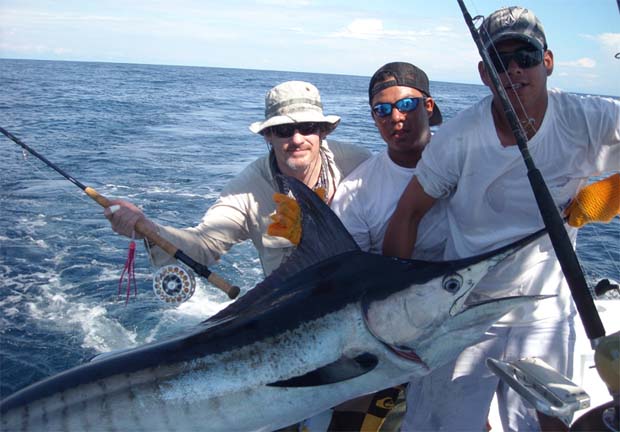 On August 29, 2014 we posted a story about the IGFA being excoriated by Shiffman et al. (an online Marine “Policy” publication) for promoting trophy fishing for threatened species. Click here to view story . . .

[dropcap]A[/dropcap] recent online publication in Marine “Policy titled “Trophy fishing for species threatened with extinction: a way forward building on a history of conservation” by Shiffman et al. claims that the International Game Fish Association (IGFA) is responsible for stressing fish populations by rewarding anglers who target “trophy fish” for IGFA world records.  They further contend that maintaining fishing records encourages anglers to target large, fecund individuals, some of which are listed as threatened with extinction by the IUCN.  However, the authors’ lack of understanding of IGFA fishing records and incomplete analysis of IUCN and IGFA data results in a flawed interpretation of IGFA records’ impacts on threatened species.  The following is an excerpt from the rejoinder that has been sent to Marine Policy for publication.

First, the authors’ statement that weighing fish necessitates transporting fish to an official land-based weigh station for weighing and, as such, “effectively precludes catch and release for trophy fishing” is incorrect.   IGFA record requirements do state that fish may not be weighed on boats at sea or other bodies of water.  What the authors were apparently unaware of, however, is that it is perfectly acceptable for anglers to weigh their catch using personal hand scales at or near the site of catch, as long as it is not done on a vessel.  While this is not amenable to large pelagic species such as billfish, tunas and some sharks, it does indeed result in a large proportion of IGFA records being released.  In the last five years that IGFA has been recording release fate of all record category catches, 30% of weight submissions have been released alive.

Shiffman et al.’s analysis of the 2011 IGFA World Record Game Fishes book reported that of the 1,222 IGFA All-Tackle records listed, 85 species (6.95%) were evaluated as Threatened by the IUCN.  What the authors failed to include in their analysis was when these species were first listed as Threatened by the IUCN and how many IGFA records have been submitted since that time.   An investigation of the IUCN website revealed that 75 of the 85 species were first listed as threatened within the last 20 years, yet only 15 All-Tackle record applications were submitted to the IGFA during that time period.

The authors’ central argument is that “recreational trophy fishing occurring with the goal of earning an IGFA world record may have a disproportionate negative impact on the population dynamics of Threatened fish species by removing larger, more fecund individuals”.   However, with a total of 15 All-Tackle records for threatened species submitted for IGFA certification in the last 20 years, Shiffman et al. display an unfamiliarity with the basic principles of population dynamics in fishes as well as a limited grasp of the relative impacts of record fishing vs commercial fishing efforts for many of these threatened species.   For example, according to the Commission for the Conservation of Southern Bluefin Tuna (CCSBT), total landings from 1991 to 2011 for southern bluefin tuna, which are listed as critically endangered, totaled 293,695 metric tons.  The only southern bluefin tuna (Thunnus maccoyii) that was submitted for an IGFA All-Tackle record during the same time period weighed 167.5 kg and represents 0.00005% of the total catch recorded by the CCSBT.  Similarly, the Food and Agricultural Organization of the United Nations (FAO) landings data for mako sharks (Isurus spp.) during the same time period totaled 1,264 metric tons and the only mako shark All-Tackle record submitted during this time weighed 533.84 kg, representing 0.04% of the estimated global catch.  These examples give little credence to the authors’ declaration that IGFA records have a disproportional impact on fish populations, especially when viewed from the perspective of global fisheries.

In summary, Shiffman et al.’s assertion that IGFA records are creating a disproportional negative impact on threatened fish populations is essentially indefensible.  Can and does recreational fishing impact fish populations?  Absolutely.  However their conclusion that a cessation of IGFA All-Tackle records for IUCN threatened species would “result in an instantaneous reduction of fishing pressure on the most fecund members of these at-risk species, and would promote the recovery of their populations” lacks biological credibility when 1) IGFA All-Tackle record submissions for these species are rare events and 2) commercial landings for many of these species are orders of magnitude higher than trophy fishing efforts.

Contact the IGFA and join. The International Angler Magazine, four issues a year, is worth the price of admission, and the over 400 page IGFA WORLD RECORD GAMEFISHES, plus email updates keep you hooked up and in the know year ’round.