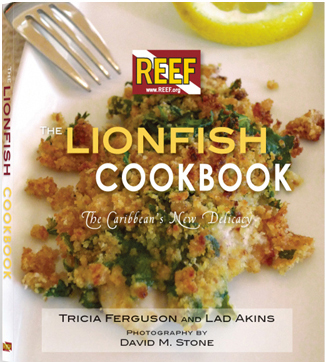 Conservation: Your best friend may now be a spearfisher. Think about that anglers all!

It’s open season on invasive lionfish on the reefs of Florida and the Bahamas.

And they’re good, too. Click on REEF to order.

On her first-ever scuba diving adventure on the colorful coral reefs and blue holes south of Eleuthera in the Bahamas, underwater photographer Maggie Martorell of Hollywood immediately noticed something was missing.

“Where are all the little tropical fish?” Martorell wanted to know.

The reef looked healthy; stands of mountainous star coral jutted up from the ocean floor, interspersed with tangled branches of staghorn. Soft corals, such as sea whips and sea fans, undulated with the gentle current. A few groupers swam around the entrance to a marine cave that descended into darkness in the middle of the reef tract.

But Martorell was alarmed by what she didn’t see — convict-striped sergeant majors busily patrolling the reef to protect their mass of lavender eggs; brightly hued parrotfish munching the thin coating of algae covering the coral; angelfish, gobies, surgeonfish and others meandering around, doing whatever it is they do in a typical day.

Then, as Martorell swam around with her camera, she saw a large lionfish sitting boldly outside a cavern. A few minutes later, she spotted another of the peppermint-striped predators, then another. They weren’t even trying to hide from the photographer and her fellow divers.

The same thing happened during Martorell’s second day of diving at another reef off Eleuthera. Lionfish were plentiful, but she had trouble finding other subjects to photograph.

Back on board the dive charterboat, Martorell and her companions talked about spearing the lionfish. But, without a special permit from the Bahamian government, scuba divers are not allowed to use spears; only breath-hold divers may hunt with the weapons. None of the occupants of the boat were skilled at holding their breath long enough to kill a fish in 50 feet of water, so they had no spearguns. And none of the guests — all tourists from the U.S. — had come prepared with heavy-duty plastic nets to catch the venomous invaders from the Pacific. So the lionfish were safe.

Lionfish — rarely seen in the South Atlantic, Gulf and Caribbean until about 10 years ago — can now be found in waters as shallow as a few inches in mangrove estuaries to more than 1,000 feet deep in the open sea. They mow down tropical reef fish like a Briggs & Stratton cuts a suburban lawn. According to Lad Akins of the Key Largo-based Reef Environmental and Education Foundation (REEF), divers are their primary predators — just as long as they take care to avoid the venomous spines sticking out from the fish’s back and undersides. [Read More]