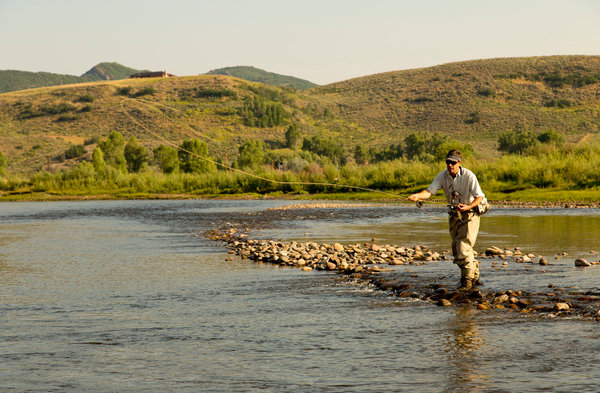 Fishing Freshwater: Casting in Colorado, away from the crowds

[dropcap]M[/dropcap]y Sunday edition of the New York Times, which hangs out on chairs, tables and my desk through at least Thursday’s, is hardly my go-to for sports and especially fly fishing, but the Travel Section this week had a great story by Christopher Solomon that needs to be shared. It’s about Colorado, a state that had to send out two patrol cars to arrest me for fishing a stream just off a dirt road – 100-feet away from a broken down walk-over barbed wire fence where I had parked Florida licensed SUV.  I wasn’t 100 miles from Denver, taking a scenic way home from a three day stint at the fly tackle dealers show a few decades ago. I’ll let Chris tell you more. 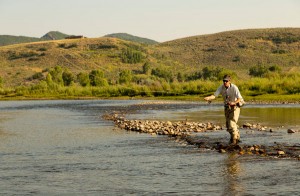 NORTHERN Colorado was still rubbing the previous night’s Independence Day parties from its eyes as I parked beside the rancher’s fence, pulled on waders and strung my fly rod. In the valley the drowsy river was a silver twist among green willows. The air smelled of wet sage, and black cattle stood like chess pieces in the distant fields. Beyond them the 12,000-foot peaks of the Mount Zirkel Wilderness had lined up for morning’s roll call, their summits lighted up like match tips.

I unhooked the barbed-wire gate, stepped past the “no trespassing” sign and headed toward the North Fork of the North Platte River in search of monster trout. There was no need to watch my back for a rancher with a shotgun and a short fuse: this stretch of Eden was mine alone, and I was completely legit.

This wish-you-were-here moment was brought to you by the Rocky Mountain Angling Club, a relatively little-known group whose members have access to waters on 46 private ranches and properties in three states, including some storied stretches of trout-filled water. Nearly all the properties are in Colorado, a state with world-class fishing but whose infamous water laws can frustrate the out-of-state visitor.

In states like Montana and Washington, fishermen are usually allowed to walk along a river’s waterline even if the surrounding land is private property. Not so in Colorado, where landowners own the shore and the earth under the river, too. Anglers and rafters can float navigable waters in a boat, but they can’t touch bottom — no hopping out to wade, no dropping anchor to heed nature’s call. And private property can be vigorously enforced — with phone calls to the authorities, tickets for trespassing, and, occasionally, confrontations.

That doesn’t mean the state is locked up; far from it. Colorado has more than 23 million acres of public lands on which there’s lots of fishing. Yet knowing where to go to find a great fishing spot that’s also legal, and that’s not so popular that you’re casting your Chernobyl Ant into another angler’s creel, can be tough for the visitor, especially one without the funds to pay for a guide.

Here’s where the Rocky Mountain Angling Club comes in. The 20-year-old, mostly family-run club holds leases on about 80 miles of creeks and rivers, including on some of the state’s greatest hits — the Gunnison, the Arkansas, the Yampa — as well as pleasant tailwaters within a short drive of Denver. Other properties include 23 lakes and ponds and a few spots in southeast Wyoming. And members get a discount to fish Ted Turner’s luxurious Vermejo Park Ranch in northern New Mexico. 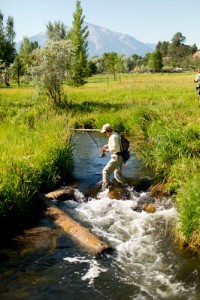 “We always tell them we won’t guarantee that you’ll catch fish,” Pat Barz, the club’s semiretired vice president of operations, said. “But we do guarantee that there are fish there to be caught.”

I first heard about the club when a fishing guide from Vail let the secret slip last winter over après-ski beers in a British Columbia ski lodge. His words lodged in my mind through the long, slow days of spring snowmelt. As fishermen go I’m still a tenderfoot, albeit an enthusiastic one, even after a decade of fishing. My waders leak, and my cast resembles a man swatting flies. What I know as much as any pro, though, is the value of a quiet piece of river, and big fish that aren’t much smarter than I am.

HIGH-END clubs that stock a few miles of river with trophy “hogs” for the exclusive delight of the Orvis set are hardly new. What’s different about the Rocky Mountain Angling Club is the amount of fishing waters available, and the huge variety of locations. Then there’s the price: membership in private clubs can easily run thousands of dollars; even hiring a guide for the day to gain access to private water can run $400. The club, however, is not just for hedge-funders on holiday: members of the Rocky Mountain Angling Club pay a one-time initiation fee of $350 (see “Joining the Club” at the end of the story for how to get around that); an annual $120 fee; and a daily “rod fee” each time they fish, which averages about $65. The landowners, in turn, get a share of those fees — an incentive to keep their land undeveloped. [read more]