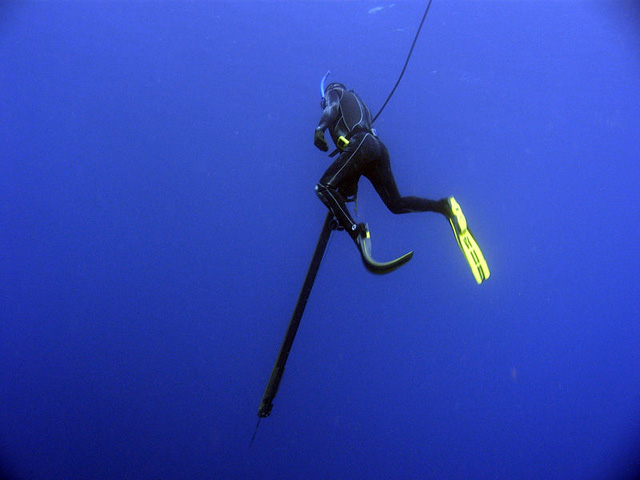 Feature: Tarpon are under threat in federal waters by spearfishermen

By  Steve the Humble Angler

This spear fishing activity is not sport, it’s indiscriminate culling

[dropcap]T[/dropcap]he argument for catch and release by sports fishermen is by and large a simple one. If the species is endangered or alternatively you are fishing for a species that is thriving in its natural environment then you should make every effort to learn the basics of CAR and practice it.

This is a simple argument, and the lines are generally black and white. There are some subtle shades of grey when it comes to fish that are not native to a particular region or waterway and those fish that are specifically stocked and replenished on a regular basis in order to offer a sustainable target for hobbyists.

However, there are some fishing practices that simply do not allow for any discretion on the part of the sportsman. One of these is spear fishing. Before there is a great gnashing of teeth and a rending of clothes (mine specifically by the hoards of mortally insulted spear fishermen) I would like to go on record that I am simply stating the obvious.

You cannot release any fish species on the face of this planet that has several feet of stainless steel protruding into its vital organs. That’s a fact. Now I am not for one moment questioning the validity of spear fishing as a sport, when the rules are adhered to it is both challenging and can provide an adrenaline filled and rewarding pastime.

I am specifically referring to the current situation that exists with regard to spear fishing for Tarpon in Federal waters off the Gulf Coast states. Florida seems thankfully to be free of spear fisherman targeting this species.

However, the coast of Louisiana is another story entirely. There is a particular club in Louisiana whose members are targeting Tarpon that are congregating around oil rigs on the coast. The reason that this is a Federal problem is that the state waters of Louisiana only extend for three miles and there is only one rig that is within this three mile limit.

Photographic and video evidence would seem to indicate that this group of spear fisherman is targeting the Tarpon surrounding numerous rigs outside of the state waters. I’m not going to name names, although I’m certainly safely outside of both state and federal waters, and thus not within easy reach of a careless shot, but a simple search should reveal the name of this club of spear fisherman.

To make a bad situation even worse the club offers prize money for Tarpon weighed on the dock during regular competitions. It doesn’t actually matter how many prizes there are, or the amounts involved. Human psychology being what it is this practice will motivate the killing of mature adult specimens. It is not as if the fisherman is informed about other catches that have taken place and able to therefore selectively target only those fish that are potential prize winners.

The question here is regarding the rules and regulations governing spear fishing for Tarpon. I believe that there are certain species that deserve protection and this protection should be strictly enforced within the boundaries of the applicable laws. Anyone transgressing these laws should be punished to the full extent of those regulations. I am not allowed to shoot Panda, in part because they’re a signature animal of the WWF and perhaps more importantly are endangered and cuddly.

Unfortunately there are species, like Tarpon that are not critically endangered nor cuddly and will not be featured on any poster to raise funds for any charity. Some of these animals are also very rarely seen by anyone outside of a select group of people who have a specific interest in their welfare. However, if the species are in danger, then they deserve protection.

What makes this spear fishing activity so needless and potentially destructive is that the fishing is for boasting rights, plain and simple. Tarpon are not known to taste particularly good. I know that I’ve never seen any featured on the menu of any seafood restaurant I’ve frequented. So this is not sport fishing for consumption. Secondly Tarpon are particularly long lived, some longevity estimates being as much as 80 years. This spear fishing activity is not sport, it’s indiscriminate culling. It is removing the breeding population of a particular species and threatening the sustainability of the entire stock.

There are claims that the spear fisherman are helping with a sustainability and life cycle study of these populations of Tarpon by supplying carcasses to a particular research organization. Again, no names no pack drill. This just seems an odd way of researching life cycles. If you place the entire (and this is a big if, how many of these fish are actually being taken each year?) population of a certain species under constant pressure, then it changes their behavior. This is simple research 101. If you kill a substantial portion of that population then the information that you have to work with becomes statistically irrelevant.