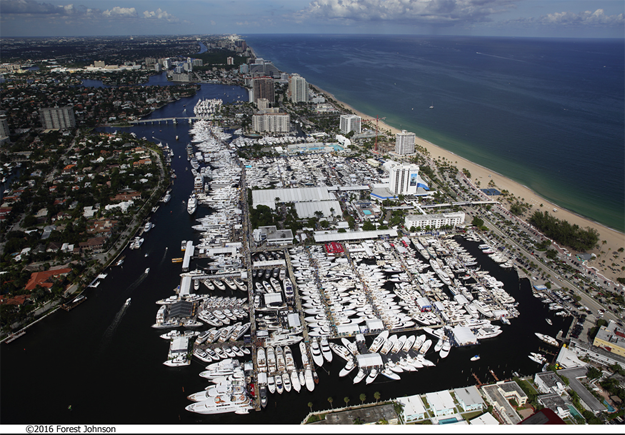 [dropcap]T[/dropcap]he Fort Lauderdale International Boat Show is the show of shows when it comes to BIG everything boating. However, a fly fisher is pretty much left out of the presentation at this gala – it is all about mega boating and all the related accouterments that go with it.

Skiff builders are in short supply at the Fort Lauderdale International Boat show; they are only micro players in the BIGS of the boating world shows.

Micro players like Dragonfly Boatworks are there, having earned a spot as the leading innovator and having become an industry leader. They are the best at can-do, and the best at doing whatever it is they say they will do.

Dragonfly has also built a reputation as a tender builder for megayacht owners that want more out of their tenders than ferrying guests to and from a Heidi Klum Intimates shopping experience.

Mark Castlow has become the driving industry force in affordable, high-end skiffs. Innovation the cause of the company’s found fame – a Castlow trademark. Dragonfly Boats are in everyone’s skiff league – Bahia Mar, booths 1004-1005.

Another attendee, Hells Bay (HB), started as already being prominent in the high-end skiff building market. Adroitly, Chris Peterson, the president of HB rescued the company and its revolutionary designs in 2006. Since then, Chris has used his inherited wealth to become not only a continuum in serious boat building but a welcomed benefactor of the Bonefish & Tarpon Trust.

Maverick Boatworks, the biggest player in the small world of performance flats boats will have their three models on display, two 17s and one 18 (Booth 910 at Bahia Mar).

The Fort Lauderdale Boat Show will not relate to you as a fly fisher in other than “boat” ways, don’t go if you’re not willing to see other than a few high end skiffs – you’ll be disappointed. But if you’re open-minded, bring a friend and enjoy a long and exciting day in a fun world of make-believe.

If you don’t pay taxes and bank of offshore, you will be there, but if you pay taxes, meet payrolls every week and get hammered by your onshore US bank with screw you fees, a boat show in the mega class might titillate.