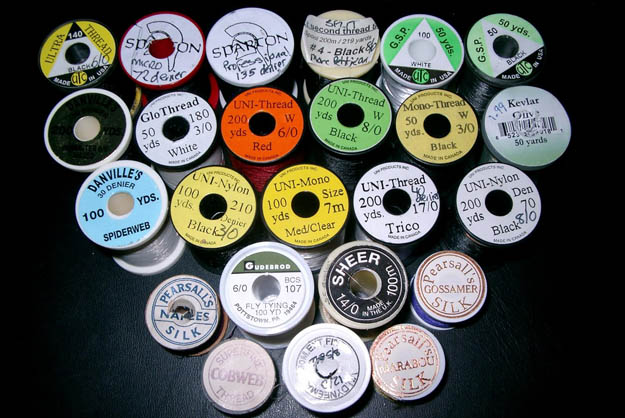 Kelley Galloup has a YouTube video devoted to fly tying threads and Tim Flagler a short, to the point, YouTube video made for Orvis on the same subject (Choosing Tying Thread – scroll down for that one minute video).

Threads used to tie flies began with silk, moved to cotton and then both were swept out of office by nylon (1935, by Wallace Carothers at DuPont). Nylon was followed by polyester, and then monofil thread which has limited applications as does Kevlar. Gel Spun came along in the late 1980’s via Allied Signal (now Honeywell) and simultaneously in Europe by the Dutch. The Honeywell product is called “Spectra®” and the Dutch version “Dyneema.” Nylon and polyester are the overwhelming tying threads of choice because they are cheap, available everywhere; they can be configured round or flat, fuzzy or smooth, and come in a gazillion colors and sizes.

In our tying world, nylon and polyester are inaccurately sized (diameter – manufacturer to manufacturer), and measured by two standards. First, an aught system invented in the 30s by Danville (the granddaddy of fly tying threads). It uses zeros (0000) to measure thickness – 12 zeros are thinner than three zeros, or 3/0. Second, the denier weight system invoked by Wapsi (UTC) in the late 80s is an adaptation from the textile industry in which 9000 meters (29527.5-feet) is thread measurement in grams. If 9,000 meters weighs 120 grams, it is a 120-denier thread. A 70 denier thread is not as thick as 140 denier thread. The denier factor, like the aught system, has come to correlate strength.

With gel spun you can add “thread count” measurement to both the aught and denier designations appearing on most labeling. The marked departure with Gel Spun Polyethylene is that it can be almost 10 times stronger than its nylon or polyester counterpart of the same denier.

GSP is more expensive, not widely available – hard to find even in a good fly shop, and it is not available in anywhere close to the number of colors found in nylon/polyester threads. But GSP easily takes on a Sharpie, so your color choice doesn’t have to be a whole spool of a weird color that you had to buy and maybe use just once. With GSP, you can start with white and color as needed, saving a lot of thread as “useful” inventory. No, it’s not hard to tie with.

With GSP you use fewer wraps because of its strength and fewer spools because you can add Sharpie colors to “white.”

The strength advantage is especially valuable with saltwater flies or anything calling for deer hair or “tight” wraps. In keeping with dollar advantage, not the disadvantage – what demands five turns or more turns with nylon/polyester is very secure with two turns using GSP, and it won’t loosen when continually wet or get UV attacked. A fly tied with GSP will last longer, especially with tube tied flies.

GSP can be a bit of an overkill for “troutsters”… a 22 Adams does not need thread strength, but thinner and stronger are not negatives.

In some circles, waxed is said to only add to what you don’t need. The advertised advantage of holding on the hook better is a bit of a stretch. Aiding in holding dubbing and other materials better is mentionable, but why buy two green spools, one waxed and one unwaxed? You can buy a lifetime supply of wax for a few dollars and spit is free.

There are more bits and pieces of information regarding tying thread… like Kevlar, but not being a threadaholic has its advantages

One minute with Tim Flagler