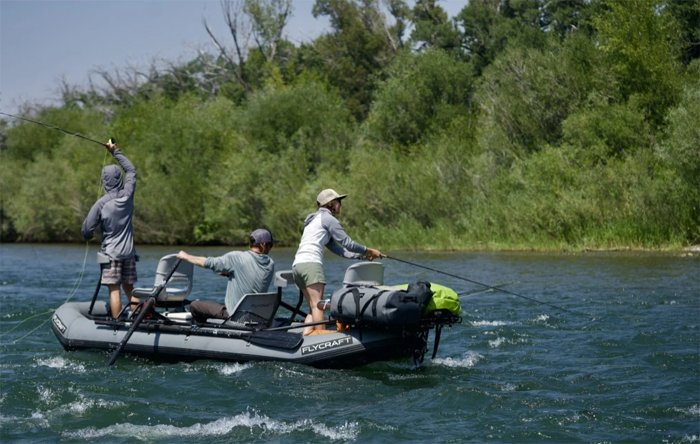 [dropcap]I[/dropcap] drove up to North Carolina to have lunch and a sleepover with an old friend, Lenny and his wife, Pam. They had just gotten into fly fishing. The surprise was Len had bought a used Flycraft inflatable from a friend’s guide friend. It showed used, but no performance deficiencies [2 hp Honda], Len said.

We ate lunch on the go, leaving Pam’s truck at their cabin and headed for the Davidson River Outfitters in North Carolina. Pam rode with me, and we did family catch up for the two-hour drive. We checked in with Kevin at the Davidson River Outfitters [DRO] and concluded the last of our official business before the following day’s outing. Pam, ever the nest provider, bought more stuff than she’d ever need and then we headed for the NC/TN border right off I-40 and hunkered down for the night at a memorably forgettable motel.

We met Kevin and another DRO guide on the Pigeon River at 7ish – we had opted for smallies [smallmouth bass (Micropterus dolomieu), morning  a species of freshwater fish in the sunfish family (Centrarchidae) of the order Perciformes]. It was July and the Watauga, a tailwater, wasn’t giving up many trout because of heat and low water.

Kevin quickly managed Lenny’s Flycraft, which Pam and I were going to use with Kevin at the helm – he brought his oar locks and oars but didn’t need them.

Len, a guy they brought along from the DRO fly shop and guide were off ahead of us. The trip is a leisurely float, and we were alone most of the day.

The smallmouth were legion and willing – biting on cicadas, streamers, and poppin’ bugs [which was the most fun]. Lenny and Pam were over armed with 8-weights and too long leaders at 12-feet. Kevin told me I was undergunned but I refused the DRO six and a leader rebuild offer – sticking with my tube flies and R. B. Meiser 909 9’ 9” 2-weight Switch Rod, which plays out nicely as boat rod in a 5-weight [175 grain], short OPST Shooting head with Lazur Running Line, tip and leader of 6/7-feet long at 16-pound tippet.