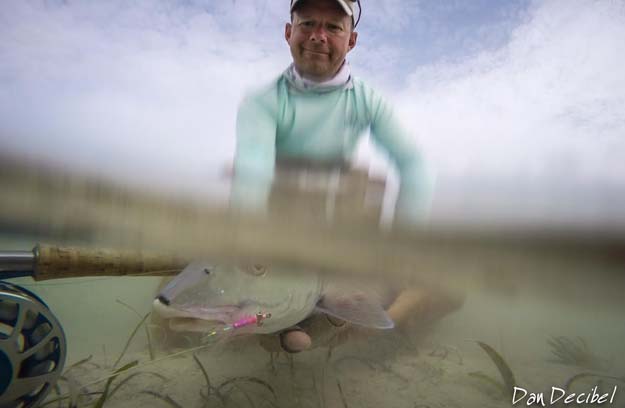 Ghost Stories Updates from the Bahamas

By: Tom Karrow, University of Waterloo, College of the Bahamas, Bonefish and Tarpon Trust

[dropcap]W[/dropcap]hile bonefish tagging efforts throughout the Bahamas continue and are even expanding, so too have Ghost Stories research efforts. Ghost Stories research entails the documentation of historic knowledge and stories help by Bahamian flyfishing guides. Given the tremendous amount of time that guides spend on the water, and the fact that many guides have learned from their fathers who were long-time guides, their knowledge is critical, and often the sole source of information about past environments. Consequently, for assessing fisheries changes, their knowledge is vital for sustainable resource management. In order to assess impacts and change, we need to have a good idea where things, in this case fish populations and habitats, started. Ghost Stories research has been conducted in Grand Bahama during the summer months of 2014 and 2015, and on Bimini in 2015. In January 2016, research on Abaco began. Study findings from research efforts on Grand Bahama and Bimini were presented to the Abaco Science Alliance Conference. Following the conference I met and interviewed nearly 20 guides from all across Abaco including legendary elders Maitland Lowe and O’Donald McIntosh as well as a host of others. During my research time on Abaco, several lodges including, The Delphi Club, Abaco Lodge, and BlackFly Lodge where I met and interviewed their guides, graciously accommodated me.

The Abaco fishery is interesting in that it is nearly an equal mix of lodge based guides as well as independent guides like Buddy Pinder, Thomas Albury or Justin Sands. Abaco is also home to the only female Bahamian guide I have met and or interviewed for my research. Dana Lowe, daughter of long-time guide Donnie Lowe works for the Delphi Club and knows her stuff. She comes from a long tradition of guiding as her uncle is non-other that Bonefish Dundee or Maitland Lowe… quite a character, and recently recognized by the Bahamas Fly Fishing Industry Association.

In March of 2016 I returned to the Bahamas to attend and present to the Bahamas National Trust Natural History Conference and interview key persons on New Providence in Nassau.  I was able to meet and interview Abaco pioneer Nettie Simoette who opened one of the first lodges on Abaco. I met with the director of the College of the Bahamas; department of Oral history and Tradition, Dr. Tracey Thompson. Dr. Thompson will house documented research files for educational purposes at the College of the Bahamas and offered me a Research Fellowship through the College to aid in this study recognizing the need to document oral history and the importance of a maritime and tourism based economy. While in Nassau, I met Ministry official’s central to preservation of the fishery and was encouraged by their positive outlook toward this initiative. Following my time in Nassau, I travelled south to Georgetown, Exuma. Exuma is stunning. Crystal clear turquoise waters encircle coral based islands with countless flats and thousands of bonefish that swim largely unbothered. Several interviews of local guides were conducted while in Exuma and I managed some exploring and ground truthing of information provided by guides. Local guides like Stevie Ferguson, JJ Allan Dames, Reno Rolle, Garth Thompson and Drex Rolle took time for interviews and openly shared their local knowledge. Drex, was also good enough to take us on the water to evaluate the fishery and he even caught a few Bones under my polling power.

While In Georgetown, I also had the good fortune of meeting and interviewing local elder, Mr. Basil Minns who was one of the first to recognize the vitality and potential tourism impact of the Exuma fishery. In the 5o’s Mr. Minns worked to train local young Bahamian men to become bonefish guides, many of whom have now passed. Although they are gone, in some cases, it was their sons or grandsons whom I met and interviewed. Sadly, the guides on Exuma unanimously and independently tell me, that an upcoming cohort of young guides is not likely on Exuma. Other more lucrative and less challenging employment opportunities draw youth from the Family Islands (like Exuma) to Nassau or even internationally, leaving a void in local communities to fill guiding positions or other vital roles. Down time from interviews and research. Dan Decibel photo.

The Reality of Fishing Pressure

While bonefish populations appear to have dropped on most Bahamian islands I have travelled to, that does not appear to be the case in Exuma. The peak of the industry seems to have been around 2007 when the Peace and Plenty Lodge, a local angling fixture, had a bonefishing devoted lodge south of Georgetown. Heavy angling pressure reduced local populations but with the global economic downturn in 2008, the Peace and Plenty bonefish lodge was forced to close. That closure and the time that has elapsed since then appear to have allowed populations to stabilize and indeed grow, boding well for local guides and travelling anglers… I look forward to returning. Some new direct flights to Georgetown help to facilitate angling trips reducing the need for over night stops added costs and lost fishing time while in Nassau.

Although my research time on Abaco and Exuma has now concluded, I have also travelled to Andros, the self proclaimed “Bonefishing capital of the world.” Andros, the largest Bahamian island, is home to dozens and dozens of guides, countless miles of coastline and literally tens of thousands of bonefish. I was fortunate to spend much of the 2016 summer on Andros travelling from the south end all the way to the Joulters at the most northern end.

Stay tuned to Fly Life Magazine.com for an upcoming update on my Andros research and for immediate, up to date project information, please visit, where recent photos, articles, and more are posted. Representing BTT at the Tropic of Cancer beach on Exuma. Dan Decibel photo.

While I know this research is vital to long-term conservation of bonefish and sustainability of this critical tourism sector, it has been challenging at times to secure support. I am thankful to Fly Life Magazine.com for their continued support as well as Bonefish and Tarpon Trust, the Fisheries Conservation Foundation, College of the Bahamas, BFFIA, participating guides and lodges and industry supporters who recognize the importance of conservation. They are: RL Winston Fly Rods, Nautilus Reels, FishPond, 12 Weight, Costa and World Angling who have undertaken the filming and editing for the Ghost Stories film. Filming is a very costly endeavor and we are self -funded at this time. If you are interested in supporting the filming of this important research project, please contact us directly or via BTT.