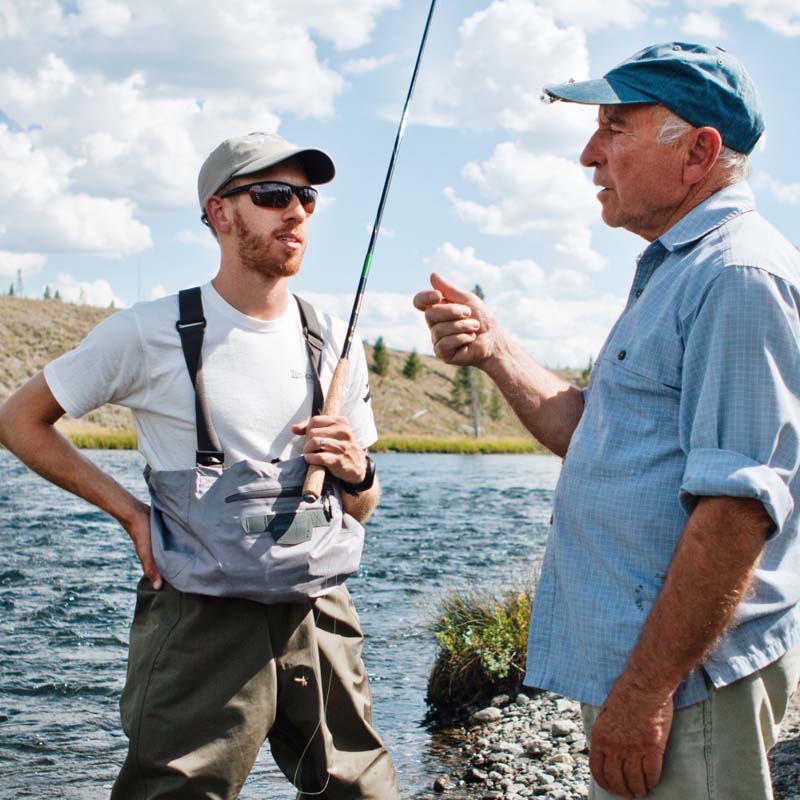 Isolated for centuries, a Japanese fly-fishing art form, tenkara, is now mainstream in the west 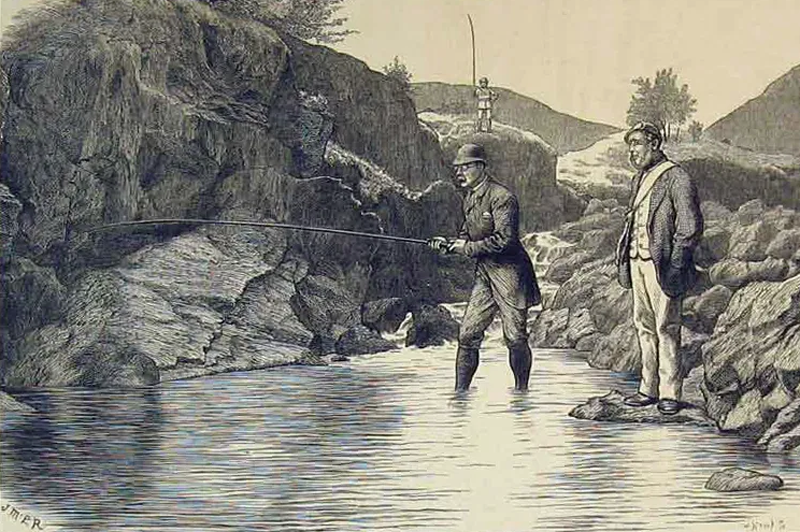 A fly fishing art form “from heaven” that has roots – centuries of them.

It is snowing in the Sierra, and my 7-year-old niece, Mayli, scrambles up one of the icy boulders that hang over this eastern California creek. We’re here to fish for trout, but it’s December, and the forecast – for both weather and fish – is grim. The rivers have been skinny for weeks, and snow blankets the mountains, sending the rainbows, browns, and cutthroats into hiding.

Our companion, Daniel Galhardo, bounds up a steep granite outcrop, eager to teach us an ancient way to fish. Galhardo has been fishing throughout the three decades of his life, starting with rods he made from branches in Brazil, where he was born. He’s slim and graceful, with neatly cropped hair and beard, dressed as if for an alpine ascent in a down jacket and thick-soled boots. But tucked into his waistband is a fishing net he made from a branch of Jeffrey pine, and in his hand, he carries a 12-foot-long rod of his design, based on models he saw in Japan, where he learned about a fly-fishing tradition called tenkara. 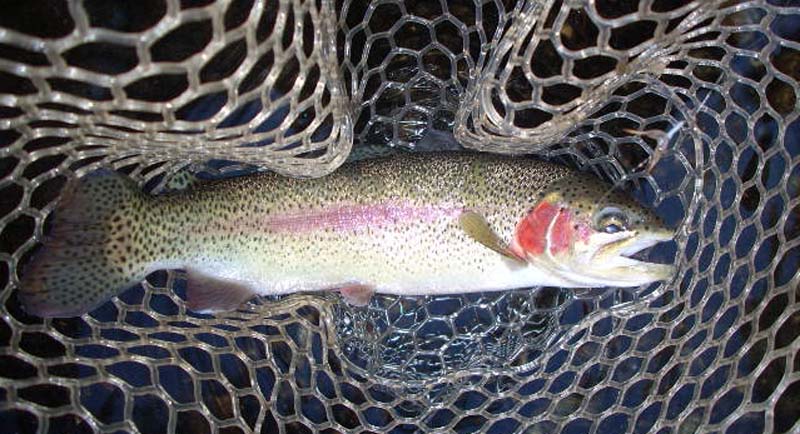 Tenkara, which roughly means “from heaven,” is a modern name for a centuries-old Japanese fishing technique

It had almost died out by the 1980s when a professor of sports science named Hisao Ishigaki started researching its history and demonstrated it on Japanese T.VT.V. Records are scarce, but it’s known that tenkara was practiced by highland peasants who fished mountain streams for char and trout to sell at market. The thick brush and deep gullies left little room for long lines or sweeping back-casts, so the peasants devised clever ways to swing, roll and slingshot flies to reach tucked-away fish. Sawa no bori, waterfall-climbing skills, often came in handy.

A tenkara rig could not be simpler – just a pole, a line, and a fly. No reel. The rod is longer and thinner than its Western cousins, and it tapers dramatically to a strong but flexible tip and a fixed length of the line, usually between 10 to 25 feet, depending on the angler’s skill and choice of locale. Together, a pole and line provide 24 to 41 feet of reach, just enough for the tight corners of a mountain stream, where perfect placement is the challenge. Because the rod is built from telescoping segments of graphite or bamboo, it collapses down to a baton that can fit into a back pocket. The rod, with a spool of line, weighs just ounces. Flies, called kebari, are tied with a reverse hackle, a feather that flares like a tutu towards the hook’s eye to help them ride currents. Tenkara anglers, always economical, use just a handful of patterns rather than lugging an arsenal of flies.

“It was exactly what I’d been looking for,” he says. “As I’d advanced with fishing, it became all about second-guessing which fly to use, which reel, which rod.” When he was a kid, he explains, “fishing had been simple, joyful, relaxing. Tenkara brought that all back to me.”

Galhardo was so inspired that he quit his banking job within a year to found Tenkara USA, introducing the method outside of Japan for the first time. He started the company in San Francisco, then moved it to Boulder, Colo. Other burnt-out anglers and gear minimalists quickly discovered what Galhardo had; today, Galhardo travels around the country and abroad for clinics and trade shows, including the annual Tenkara USA Summit. Fly-fishing guides in practically every state with fishable rivers have embraced the method, and the giant fly-fishing Orvis now sells Galhardo’s rods ($215 for a complete outfit).

Tenkara has also caught the attention of Yvon Chouinard, the well-known environmentalist and founder of the Patagonia outdoor gear and clothing company, whose book on the subject, Simple Fly Fishing: Techniques for Tenkara and Rod & Reel, comes out this month. Chouinard received a tenkara rod as a gift from a Japanese friend in the 1990s, but he didn’t know what it was, so he let it languish in a closet. Some 15 years later, an Italian octogenarian who still hammers his hooks and twists horsehair into line taught Chouinard a technique from Italy’s Sesia River Valley that’s remarkably similar to tenkara. After Chouinard got home, he dusted off his tenkara rod. It’s never been stowed away again. He told me that he catches four times as many fish in an afternoon than he ever did with a rod and reel.

Look at the flies closely.

“Today, there are more people fishing tenkara in the U.S  than in Japan,” Chouinard said. “You don’t need an $800 rod to catch a fish. We keep thinking we need to get more and more complex when there are many lessons from the past that we need to relearn.” To Chouinard, true mastery of any skill requires freedom from gear and extra stuff. He called tenkara “the savior of fly fishing … it is simple and inexpensive, and I can teach an 8-year-old in minutes.”

I realized that my niece would be a perfect test subject for Chouinard’s thesis when I saw her pretending to fish with a chopstick. Mayli is small for her age, with more than enough guts to make up for it. She’s the kind of girl who brings goggles to the river to dive after bugs, but until today, she had never actually seen anyone – except maybe cartoon bears – go fishing

Now I am watching her, a diminutive angler bundled in pastel snow gear, cast a real rod for the first time. Galhardo shows her how to grip it with her index finger on top, and then move her arm from 10 to 12 o’clock, with her elbow bent at her side.

The basic tenkara cast looks a lot like a Western fly cast, with the advantage that a tenkara angler can cast tight, aerodynamic loops with just one hand. Because it relies on the rod’s flexibility, it requires a lot less power. This allows even an inexperienced angler to cast a fly softly and control the line in the current more deftly than is possible with a Western rod. A tenkara rod is so responsive that even the softest nibble sends a visible quiver, while a fight bends it into a deep arc. It is an unfiltered way to experience the best part of fishing, proponents say. At times, it feels almost like catching fish with your hands – minus the trouble of getting wet.

At first, Mayli’s casts flutter limply, but within a couple of minutes, as Chouinard predicted, she has figured out how quickly to move on her back cast, and then how long to wait for the tip of the rod and the line to catch up before starting the forward cast. When she adds a subtle wrist-flick at either end, the fly circles in a graceful loop overhead and settles silently on the surface of the water.

The two movers and shakers, Daniel Galhardo of Tenkara USA, and Yvon Chouinard, Patagonia, at Tenkara Summit in 2017.

he joins Galhardo on top of the boulder and starts looking keenly for fish. In a small pool, they spot a brown trout, maybe nine inches long, circling lethargically in the near-freezing water. Within a few tries, Mayli’s beginner’s mind has her casting about three inches in front of the trout’s face. After a few more, she’s figured out how to twitch the rod to make the fly dance. Suddenly, she crouches in a low stance, using all of her strength to pull back on the rod and keep the line taut. The rod bends over her head and twitches fiercely.

“Fish on!” Galhardo shouts. “Set the hook!” As the fish twists and fights, Mayli exuberantly uses the rod to swing the fish high in the air, instead of finishing in the traditional way, reaching for the line to pull it in. She lands it with a triumphant thump at our feet.

Galhardo scoops her catch in his net and holds it in the water so we can all get a good look at the fish’s bright copper flanks, which glisten with blushes of moss green and the red streaks of sunset. We watch until its movements and breathing calm, and then Mayli turns out the net. With a last glint, the fish wriggles towards the opposite bank and disappears.

What was that like? I ask her. I’m expecting her to say something profound about the experience, as happens in all the stories I’ve ever read about catching fish.

Mayli looks down at the water and says, “It felt heavy.”

She spends the rest of the day fishing, too busy to talk.

This story is part of an April 2014 special issue of the HCN magazine devoted to travel in the West. Tienlon Ho lives in San Francisco and writes about food, technology, and the environment for a range of publications, including Lucky Peach, The New York Times, and G.Q

Go west and rediscover America without glass canyons, concrete, and neon. If you can’t leave this morning, get your HIGH COUNTRY NEWS and feel it today.