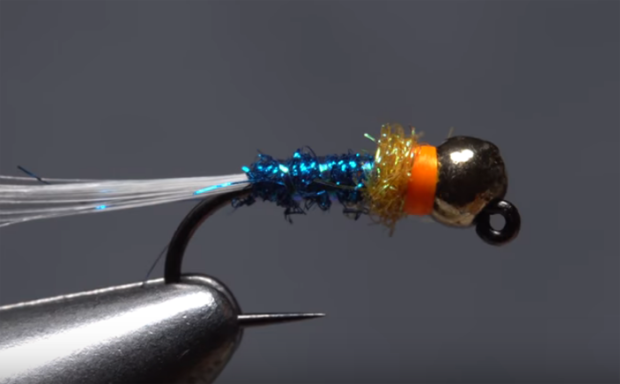 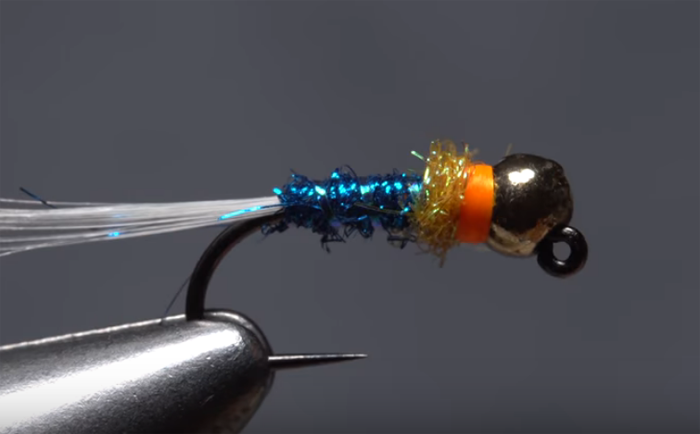 Blue, Tim Flagler said, is the selling point trouts will buy into if you swim it right

[dropcap]I[/dropcap] did not have the size #16 Lightning Strike jig hook, but I could make do. I would also need the blue steelie ice dub, fluorescent orange thread, and orange ice dub. I’d have to drive to downtown Atlanta 30 minutes away to get to Gary Merriman’s Fish Hawk Fly Shop, one of three good fly shops in the Atlanta area. Still, sometimes traffic on I-75 could turn 30 minutes into a half-day turnaround, so I bagged the idea of sharing the fly and gave up on the idea of tying Tim Flagler’s Icy Hot Jig.

While at the Pet Store picking up Larry’s food and litter, I realized that Michael’s was next door and next door to it the Dollar Store. Long story short, I found everything I needed and now have enough “ice” dubbing for several years, and in colors I’ll never need. Stop by, and I’ll give you a trunk full.

I wanted to tie Flagler’s Icy Hot Jig fly on a tube, but the bead, jig hook, and being a #16 presented problems. Plus, the fly was an easy tie on a small hook and hooks that small are better to tie onto than a tube.

After a couple, I got the material layout right and peeled off about 15 flies – Angie would want her cut, and her sister if in town, would also want a few. The weather had just turned fall into winter, and if hung around in the 30s and low 40s for a week, the fly, advertised as a winter world-beater, would be a timely possession.