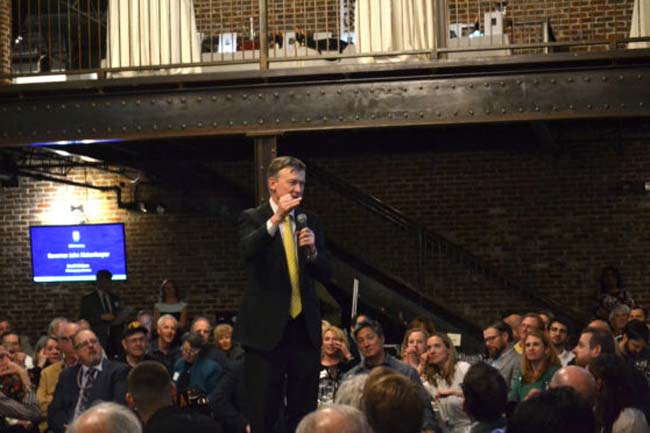 [dropcap]G[/dropcap]ov. John Hickenlooper has received the 2018 River Stewardship Award from Colorado Trout Unlimited, for actions during his terms as Denver mayor and as Colorado governor that led to significant conservation victories for the state’s rivers and streams.

“In 2007, the Denver Chapter of TU held its first ‘Carp Slam’ tournament, to raise funds for and build awareness of the South Platte River through Denver, promoting a vision of the river as a living centerpiece to a great city. They were fortunate to have an ally in the Mayor’s office, who encouraged and empowered city staff to partner in the effort. In the decade since, millions of dollars have gone into improving the river, its greenway, and promoting economic revitalization along the corridor. Today the Denver South Platte is a river on the rise.”

The Upper Colorado River was another watershed that benefited from Gov. Hickenlooper’s leadership, said Nickum. In decades past, Denver Water had not always seen eye-to-eye with conservationists or with West Slope communities and interest on water diversions and river impacts.

“As Mayor, John Hickenlooper appointed a new breed of commissioners to the Water Board—leaders like Tom Gougeon, Penfield Tate, and the late George Beardsley, who encouraged Denver Water to engage with other interests to find cooperative, collaborative solutions – not simply continue the old water fights of the past.” The resulting landmark 2013 Colorado River Cooperative Agreement was groundbreaking and spawned the present Learning by Doing partnership that is meeting water needs while improving the health of the Colorado River watershed.

“That same spirit of collaboration is woven through the Colorado Water Plan adopted by the state under Governor Hickenlooper,” said Nickum. “The Plan encourages projects and programs that benefit multiple uses, from growing cities to agriculture; it supports local collaboration through stream management planning; and it features healthy rivers as a fundamental part of our state’s water values. And that that vision has been supported by real commitment and resources through new state funding.” Nickum noted that Gov. Hickenlooper had pulled together “the right people, at the right place and time, and with the right support and encouragement, to make these remarkable accomplishments possible. He has done nothing less than create the climate in which river stewardship can thrive in Colorado. And that is the essence of great leadership.”

Colorado Trout Unlimited’s River Stewardship Gala is the state’s largest celebration of Colorado’s rivers and world-class fishing opportunities. In 2017, nearly 400 guests helped to raise over $80,000 for Colorado TU’s conservation efforts throughout the state. Funds from the River Stewardship Gala go towards CTU’s work in youth education, protecting statewide in-stream flows and temperature, reintroducing and protecting native trout, and preserving and restoring the state’s fisheries and their watersheds.