By Evelyn S. Gonzalez for PHYS.ORG and FIU

Anglers are catching fewer bonefish in South Florida. Florida International University scientists say there are many factors that could be behind the drop in catches, with warmer temperatures, more predators, fishing and contaminants among them. 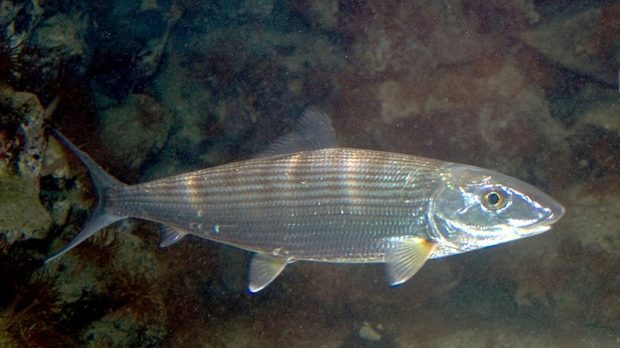 FIU coastal ecologist Jennifer Rehage and a team of scientists found the decline is affecting all of South Florida, with some areas more affected than others. They examined bonefish, bonefish catches and water quality throughout Biscayne Bay, Florida Bay and the Florida Keys. They also surveyed and interviewed nearly 300 anglers and fishing guides on their fishing experiences in 2015.

The scientists found bonefish decline began in 1985, with the lowest catches seen after 1999. A 2010 cold spell made things worse for the sportfish, killing many of them, along with other tropical plant and animal species. Changes in both adult and juvenile fish appear to account for the decline. The highest declines are seen in Florida Bay and the lowest in Biscayne Bay.

Adult bonefish take up residence in salty marine environments, but little is known about where they spawn or where juveniles live in South Florida. The scientists also found juveniles are spending time in low salinity environments early in their lives, particularly in Florida Bay. Nestled in between the southern end of the Florida peninsula and the Florida Keys, the bay is sensitive to changes in the quality, movement and distribution of water in the Everglades.

The scientists call for addressing local and regional factors, conserving and managing adult and juvenile bonefish, and restoring freshwater in the Florida Everglades.

“People haven’t looked for bonefish in low-salinity environments because they think they’re a marine species,” said Rehage, a researcher in FIU’s Institute of Water and Environment. “This finding tells us the link between bonefish, freshwater and the Everglades is stronger than we previously thought. We need to consider low-salinity habitats in bonefish conservation and management.”