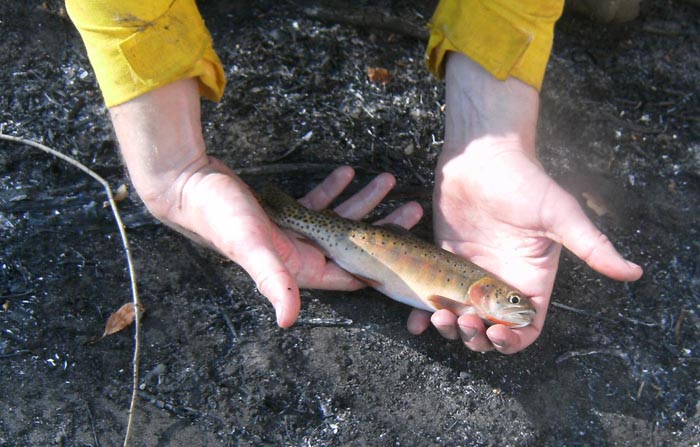 What happens to the Salmonidae after a wildfire?

Mudslides are now the attention given to the beleaguered West Coast by tragedy chasers who want us to hear their spin. But soon they will replace it with a focus on the horrific life and property destroyers that the long hot, dry, windy summers and fires bring.

When a wildfire rages, some animals fly, hop, or run to safety. But fish can’t. At first, it saves them.

“Climate Change” brought about by the mistake of inattentiveness to fossil fuel burn will again pummel the American and Canadian Wests. The politicians in Ottawa and Washington DC will talk-talk, and little will get done – like teenagers long-range plans have attentiveness to the catastrophe only as long as our attention span lasts – the next day.

In that devastation of raging firestorms, stream waters with trouts, salmons, and other aquatic life that helps sustain life far beyond its coordinates will darken with mud and erase life.  — Skip Clement

What Happens to Fish After a Wildfire? 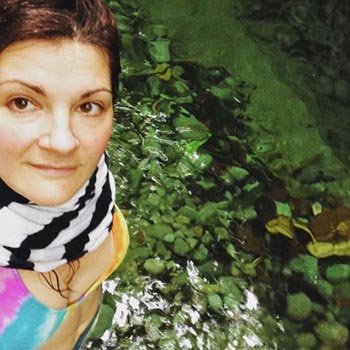 A geologist in her first career, Starre Vartan is now a freelance science writer—but she still picks up rocks wherever she goes. She has published short fiction, essays, and journalism in a variety of venues, including Slate, Scientific American, Audubon, Newsweek, and more. A dual citizen of the United States and Australia, her first memory is of exploring tide pools near Sydney; later the Hudson River inspired her career in the sciences.

[dropcap]D[/dropcap]uring a fire, the temperature of a stream or river will sometimes rise to a lethal degree. If a fish survives without being cooked, short-term changes to its environment might finish it off. Denuded stream banks erode quickly, with topsoil and ash clouding streams and making it difficult for fish to breathe or find food. Even firefighting efforts are a threat: foam fire suppressants can suffocate fish, while fire retardants can be toxic.

Following those immediate threats, wildfires can also change a fish’s habitat for months and even years. If trees that once provided shade burned down, that stream’s water could heat up enough to make it unsuitable for cold-water fish, such as trout. Heat is particularly dire for eggs and fry.

Not surprisingly then, in the weeks and months after a wildfire, “fish populations will decline, sometimes dramatically,” says Rebecca Flitcroft, a fish biologist at the US Forest Service. Flitcroft points out that as populations, many animals, including fish, have evolved to survive severe, shorter events such as fires even if their numbers temporarily decline.

Indeed, while fire can be terrible for individual fish, the story for populations can be entirely different. Ash from burned plants typically makes its way into streams and rivers, causing heightened loads of phosphorus, nitrogen, and potassium. These nutrient dumps often result in algae blooms, which, in turn, support more insects for fish to eat.