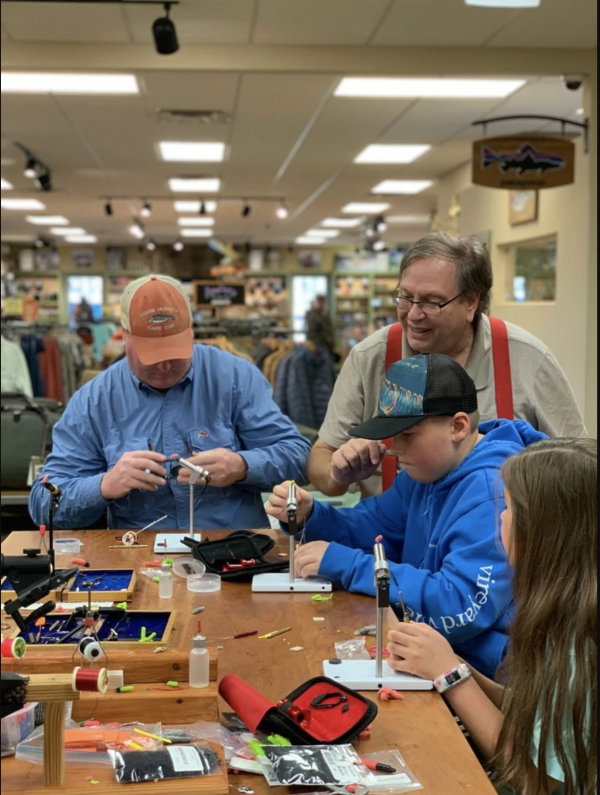 Just like that, there I am, fishing out loud – again!

[dropcap]I[/dropcap]f you’ve done much fishing at all, you may have noticed that it’s usually a quiet sport. Often, few words are spoken. The soundtrack to a day on the water is free of human voices and is populated, instead, by the purring of the wind and the music of the water and maybe an occasional call of some creature wild and unseen.

Yet on occasion it can be a remarkably verbal undertaking too. Yes, fly rod fans, it seems that many fly fishers do sometimes like to talk.

I’m as guilty as anybody. Sometimes I’ll chat with my fishing buddy – or with myself, if nobody else is around. I’ll offer out-loud commentary to no one in particular on whatever I happen to be seeing: riffles, pools, cover, rises, flowers, birds, bugs, scenic vistas, and so on.

A buddy of mine calls it “fishing out loud.”

“It’s entertaining, you know,” he told me once. “But mostly harmless, I suppose.”

Just the other day I ran across one of the best examples of out-loud fishing I’ve ever seen. It happened on a little stream near the north Georgia town of Dahlonega. It was delightful, and I want to tell you about it.

The fishing in this little creek can be good sometimes, but the star attraction is a pair of waterfalls –  and a legend. 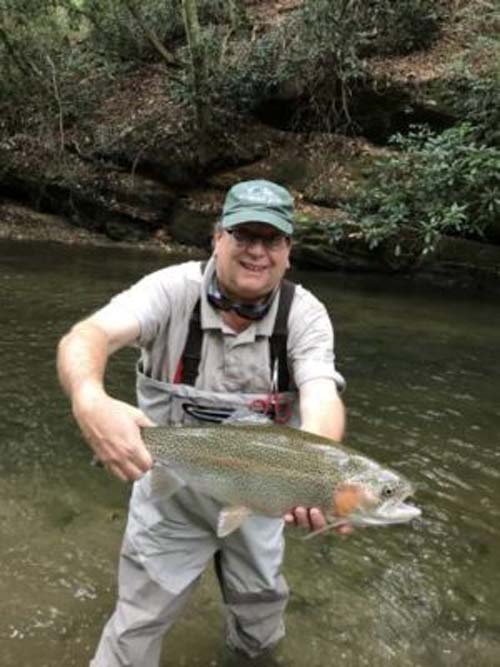 According to the legend, Spanish explorer Hernando DeSoto passed through the area back in the 1500s. That’s true. But somewhere along the way, it’s said, one of DeSoto’s men lost a piece of armor. Many years later, or so the story goes, another somebody found it – and that’s how the waterfalls got their name. I can’t imagine what it must have been like to hike through the mountains of what is now northern Georgia while wearing heavy metal armor. It just about kills me some days to do that in nothing more confining than a fishing vest.

I fish this area often. Some days I pick the hard streams, relishing the hike in and delighting in the challenge. But other days I take it easy, not wanting to work too hard, not really caring if I fool a trout or not. That’s what I was doing the other day, just meandering along the streamside trail which parallels one of the creeks near DeSoto Falls. I am kind of fishing – but kind of just hiking too, setting myself a good pace. The ol’ heart rate is up. “My cardio-minded doctor,” I say out loud, “would be proud.”

Eventually I realize that I am getting a little tired.

“I could stand a break,” I say to no one in particular as a trailside bench comes into view. There it is – the “fishing out loud” thing again.

I sit down on the bench to rest a minute.

That’s when I see them coming up the trail toward me – a mom and a young child. The mom is toting a water bottle in one hand while leading the child with the other.

Closer they come. Pretty soon they are within earshot.

“…and did I tell you about the lost armor?” I hear the mom say.

“Could be,” says the mom. “You see, once upon a time there was a brave explorer named DeSoto. He lost some armor here, and later on somebody found it. So they named this place DeSoto Falls.”

They are nearing my bench now. I wave, and they wave back, still walking, still talking.

“How do you lose shining armor?” asks the child. “I lost my toothbrush once. It’s easy to lose a toothbrush, but I bet it’s hard to lose armor.”

“So maybe it wasn’t really lost,” offers the mom. “Maybe instead of losing it they HID IT!”

That notion of hidden armor seems to intrigue the child, who walks in silence for a few yards. Then –

“Where do you think they hid it?” the child asks.

“I don’t know,” answers the mom. “Maybe there by that tree? It’s a big tree. It’d be a good place to hide something.” 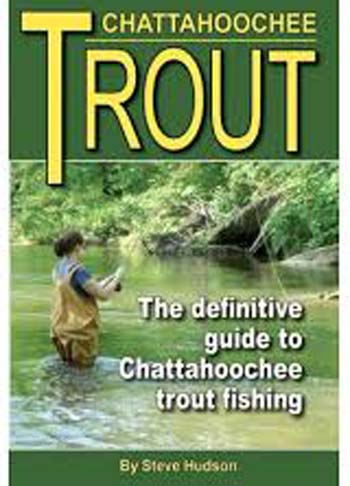 They stop. They look. I look too. Sure enough, there is something metallic glinting near a tree about five yards from my bench and couple of yards off the trail.

“I found it!” yells the child. “I found the shining armor!”

The little one forges ahead, covering the distance before her mom can admonish caution, then rummages among the leaves near the trunk and finally stands up tall and triumphant with a piece of ancient aluminum foil held high in both hands.

“I found the shining armor!”

Yeah, I know. The foil probably came from somebody’s sandwich, carelessly discarded after a trailside lunchbreak on the very bench where I am sitting. But I’m not going to tell. Neither is the mom.

The child, satisfied at the prospect, hands over the little scrap of foil. The mom dutifully stashes it in the pack. And with that they are off down the trail and quiet returns to the woods.

After a while I get to my feet and resume my own exploration. Now and then I detour down to the water to make a cast, and I even manage to fool a couple of tiny wild rainbows.

After a while I reach the falls. I take some photos and then turn to begin my hike back

But I keep thinking about that scrap of foil.

Had there really been a piece of armor at DeSoto Falls? Who knows? Who cares?

I’ll leave matters of truth to the historians. Why? Because sometimes fantasy is more fun. Besides, armor or not, I’ll bet that child will remember that adventure for a long time.

Just like that, there I am, fishing out loud – again!