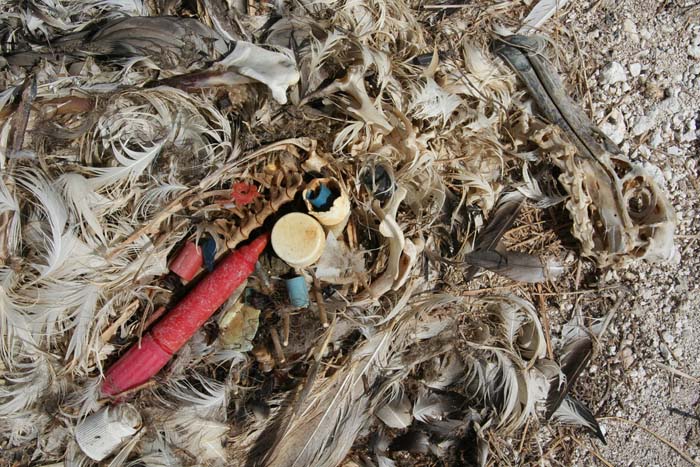 99% of the billions of tons of plastic we’ve dumped in the oceans is missing?

This Laysan Albatross chick has been accidentally fed plastic by its parents and died as a result. Photo in 2006 by Duncan Wright, U.S. Fish and Wildlife Service. A commons image.

Where Does All the Plastic Go? 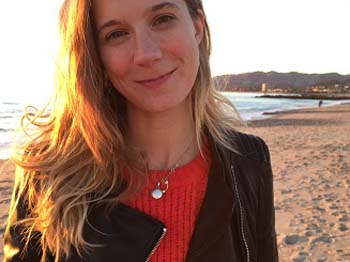 [dropcap]E[/dropcap]very year, an estimated eight million metric tons of land-based plastic enters the world’s oceans. But when marine researchers have measured how much of this plastic is floating on the water’s surface, swirling in offshore gyres—most notably, the so-called Great Pacific Garbage Patch, between Hawaii and California—they have only found quantities on the order of hundreds of thousands of tons, or roughly one per cent of all the plastic that has ever gone into the ocean. Part of the explanation for this is that all plastic eventually breaks down into microplastic, and, although this takes some polymers decades, others break down almost immediately, or enter the ocean as microplastic already (like the synthetic fibres that pill off your fleece jacket or yoga pants in the washing machine). Scientists have recently found tiny pieces of plastic falling with the rain in the high mountains, including France’s Pyrenees and the Colorado Rockies. British researchers collected amphipods (shrimplike crustaceans) from six of the world’s deepest ocean trenches and found that eighty per cent of them had microplastic in their digestive tracts. These kinds of plastic fibres and fragments are smaller than poppy seeds and “the perfect size to enter the bottom of the food web,” as Jennifer Brandon, an oceanographer at the Scripps Institution of Oceanography, told me. “They have been shown to be eaten by mussels, by coral, by sea cucumbers, by barnacles, by lots of filter-feeding plankton.”

But what happens to all the marine macroplastic—big stuff, like buckets, toys, bottles, toothbrushes, flip-flops—before it breaks down? Since most macroplastic has not been found floating at the surface, its location has, for many years, remained a mystery to scientists. “The question that everyone in the community has is, ‘Where is all the plastic?’ ” Erik van Sebille, an oceanographer who is leading a major five-year mapping project called topios, or Tracking of Plastic in Our Seas, told me. He calls the missing ninety-nine per cent “dark plastic.” It’s the dark matter of the sea.

Eventually, all of the plastic contamination ends up in the same place—documented deep in the mud. Jennifer Brandon, the Scripps oceanographer, led a recent study in which she and her co-authors analyzed a core of sediment that was excavated a mile offshore from Santa Barbara, California. The core dates from 1834 until 2009. They found that, since the nineteen-forties, the quantity of microplastic in each sediment layer began to increase exponentially, doubling every fifteen years. There is almost no oxygen at the bottom of the Santa Barbara basin where the core was drilled, nineteen hundred feet deep, so there are no animals to stir up sediment. When phytoplankton and other things fall from the surface to the seafloor, they are left undisturbed, forming perfect, annual layers, akin to tree rings or a glacier’s layers. And, just as trapped air bubbles in an ice core drilled from a glacier show the industrial revolution’s sudden and steady increase in atmospheric carbon dioxide, the plastic fragments and fibres that dot this sedimentary core correlate to postwar increases in population and commercial plastic production. “Because plastic lasts forever in sediment, and the trends in plastic consumption so clearly match the trends of the Great Acceleration of the Anthropocene,” Brandon told me, “plastic is kind of the perfect geological marker of this new geological age.” 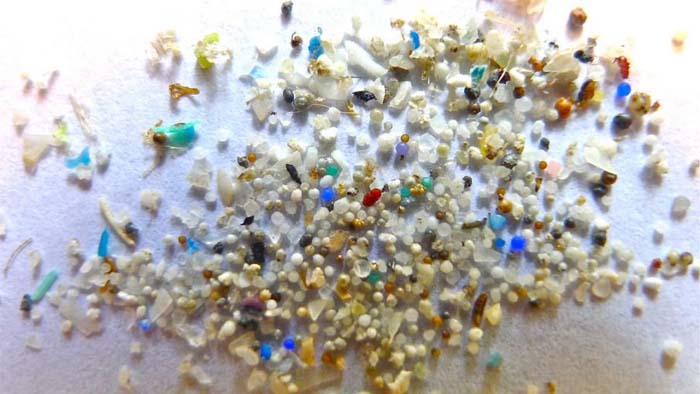 These microbeads of plastic enter the ocean as such, get pulverized into beads, waste away into pellets, float endlessly, or sink and become part of ocean sediment. They are part of the ocean for centuries or millennia. Photo Science of Everything.