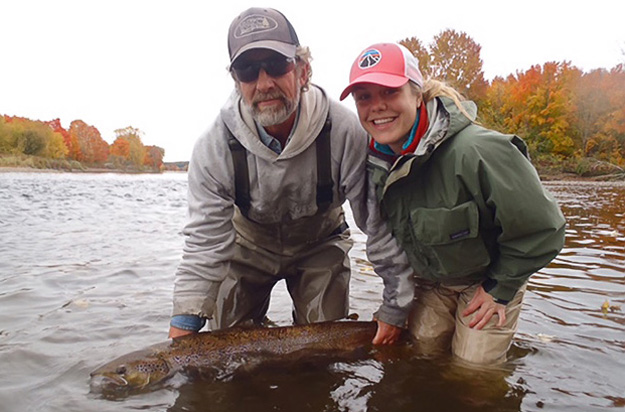 [dropcap]F[/dropcap]or anyone who loves wild Atlantic salmon and salmon rivers it should be a time of celebration – a salmon person’s own private Thanksgiving event as the salmon jockey for stretches of gravel and cobbles in the very streams where they were born. A completion of a cycle and beginning of new life in the rivers we love so much.

Events in some rivers may be a bit later this year, as water temperatures have remained warmer. Once they get down to 5 C. there should be greater action. But there is also a photoperiod trigger and many have spawned already. Check out Greg Lovely’s survey on branches of the Margaree this past week. As many realize, these nests can be dug down 50 cm / 20 in in the gravels.

This year autumn river levels were high in many areas for part of the season, but have been somewhat lower in many areas in November, not necessarily a bad thing. It will help ensure that nests are not left high and dry during lower water times in mid-winter.

Greg Lovely notes there were about 12 redds (salmon nests) within a half kilometer on Nile Brook. Signs of new life that we can all hope will result in plenty of Atlantic salmon hatching next spring. Redd showing due to the excavated and then re-piled gravel at the bottom of Nile Brook in Cape Breton. The date was Nov. 11, 2016. Photo Greg Lovely.

With the variability of the success of egg laying, Atlantic salmon scientists hesitate to provide predictions on the success of 2016’s salmon runs until numbers are compiled in the first few months of 2017. That later assessment includes results of redd counts, swim-throughs, analysis by age, and other information.

Meanwhile, that doesn’t stop everyone mulling over the anecdotal and scientific evidence we have as of November, with the angling season over and everyone with their views on numbers of salmon that returned.

What are the trends, based on evidence to date?

Large Salmon – First and foremost, there were greater numbers of large salmon in many rivers, when compared with 2015 returns and with five-year running averages. Good sign there, where large salmon have such large numbers of eggs to lay.

Grilse – Overall, a significant drop in grilse numbers was seen throughout the range of Atlantic salmon rivers in North America. It is hazardous to guess, but perhaps in the order of a 25 percent or greater drop. In some rivers, like the LaHave in Nova Scotia the drop was critical, from 160 to 19.

Not every river followed the pattern of decline. The Matane river in Gaspé had a 41% increase in grilse. But rivers like the Matane were in a definite minority.

Low Water Summer – Many regions, and especially Nova Scotia, experienced a drought year, which was definitely an issue for both juvenile salmon as well as blocking upstream movement of salmon.

Periods of High Water in Autumn – Many areas had plenty of water in the early autumn, and that may help boost numbers of successful spawnings in some rivers. In mid-autumn, central Newfoundland was literally flooded with the tail end of a tropical storm. From Russia With Love . . . Bigger on the Ponoi. ASF photo.