News: Face of PTTS weighs in on tarpon controversy

[dropcap]F[/dropcap]rom its inception, the Professional Tarpon Tournament Series (PTTS) has been conducted in a sporting manner with an emphasis on promoting conservation and the sport of tarpon fishing in Boca Grande. I would like to tell you about our history of conservation efforts and share some facts about ongoing and future efforts to protect the fishery that we all respect and depend upon.

Firstly, the PTTS has worked closely with biologists from the Florida Fish & Wildlife Conservation Commissions, Fish & Wildlife Research Institute to make sure we all benefit from the best science available and help to manage the fishery. In 2005, the PTTS served as the pilot study for the FWC’s current tarpon DNA tagging program. Since then, our organization and our anglers have provided nearly 1,000 tarpon DNA samples to the FWC to further their research.

More recently, at the request of FWC biologists, we allowed FWC tarpon researchers to take possession of tarpon that had been weighed during our 2010 PTTS & WPTTS events, so they could take blood samples and perform other tests that they were not normally able to perform as easily, and cost effectively, as they could at our events. The purpose of the tarpon physiology study was to evaluate the effects of fight time, handling and the environment on the stress responses of tarpon measured using changes in blood chemistry. This study is ongoing.

Today, the best scientific data available indicate the tarpon population is healthy and stable. The harvest of tarpon each year in Florida is less than one percent of total fish caught. The catch-and-release mortality of tarpon in Florida is an average of 13 percent. Absent of predation, the catch-and-release mortality rate falls to five percent. These numbers are very low and further illustrate that there is not a problem with the tarpon population in Florida.

As for Boca Grande area and PTTS’ impact, on average 81 tarpon per year are weighed in PTTS & WPTTS events. Hypothetically, assuming the mortality rate of these fish was 100 percent, which it has been scientifically proven not to be, PTTS tournament activity likely has no effect on the tarpon population as a whole. Further, each of those fish is legally allowed to be harvested, but PTTS tournament regulations require the fish to be released alive.

In addition, the PTTS remains one of the only inshore fishing tournaments that require the use of circle hooks, which have been found to greatly reduce the catch and release mortality on tarpon and a variety of other fish species because of their design to hook fish in the corner of the mouth. Circle hooks are required for use with live bait or artificial lures in PTTS competition. This rule will remain in effect in 2012, and we encourage our anglers to exercise this practice outside of tournament hours. 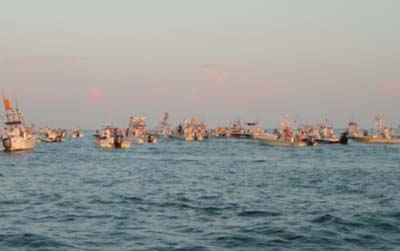 On that topic, in 2004, scientists at the Florida Wildlife Research Institute, the research arm of the Florida Fish and Wildlife Conservation Commission, conducted a study of tarpon catch-and-release mortality and the incidences of foul hooking of tarpon in Boca Grande. The study found foul hooking using the methods of livebait or “jig” fishing did not contribute significantly to the mortality of tarpon. The report also pointed out foul hooking is normal in hook and line fishing, and the percentages of foul hooking of tarpon by anglers using the “jig” was in accord with foul-hooking percentages recorded in other fisheries.

This year we furthered our conservation efforts by continuing to work closely with the FWC and making adjustments to our tournament rules. Based on the best science available and recommendations by the FWC on how to further reduce stress and mortality of fish caught during our events, we implemented the following changes for our 2012 events:
1. Boundaries: Teams fighting a fish were no longer allowed to weigh the fish if the team’s boat left the designated Boca Grande Pass boundaries. This rule motivated the teams to land the fish as fast as possible, which resulted in less fight time. It also limited the towing time and distance to the weigh scale.
2. Line size: The minimum line size permitted for use was increased from 40 lb test to 50 lb test. Increasing the minimum size and strength of our competitor’s fishing line resulted in less fight time.
3. Weigh process: Teams no longer hoist the fish out of the water for pictures at the weigh scale. The photos were taken in our newly designed clear sling. Additionally, we had two designated “release teams” trained by fisheries biologists in proper handling and revival techniques. The release teams were responsible for the revival and release of all weighed fish, ensuring that they are released outside of the fight zone.

Our organization and anglers understand that we have a duty to conserve and protect the resource we enjoy so much, and to give back to the community by supporting conservation and preservation efforts. This year we pledge to provide $15,000 to further support the FWRI’s Tarpon Genetic Recapture Study, and to resurrect the Boca Grande Pass cleanup.

Tarpon can be identified using DNA fingerprinting, or “fin-printing,” techniques. Genetic samples collected by the angling public can be used to determine recapture rates, health, migration and movements of individual fish. By evaluating these factors on recaptured fish over time, biologists at the FWRI and partners at Mote Marine Laboratory can assess the success of tarpon stocks and the connectivity of, or relationship between, tarpon and different bodies of Florida waters.

Efforts designed to remove human-generated debris from the bottom of Boca Grande Pass have not occurred since 2008. During past cleanup efforts, tons of debris has been cleared from the floor and ledges of the pass. Among recovered items have been many anchors, ropes, crab traps, heavy wire and cable and fishing terminal tackle of all types and sizes. These items often hang up anglers’ lines, only adding to the debris. Resurrecting the Pass cleanup effort will have a positive impact on the Boca Grande Pass habitat and the variety of wildlife that calls it home.

Late in 2009 the PTTS participated in a lawsuit that was an attempt to restrict anglers’ participating in our events, as well as all anglers’, ability to continue using the artificial lure known as the “Boca Grande Jig.” The Boca Grande Fishing Guides Association (BGFGA) asked the court to rule that the “jig” is a snagging device that is designed to “breakaway.” After hearing arguments from the BGFGA, FWC & PTTS, the court found in favor of the PTTS and the FWC and the case was dismissed. After that ruling, the BGFGA sought “Declaratory Relief” through Florida’s Division of Administrative Hearings. The complaint they filed failed to meet legal requirements for any type of legally recognized method of obtaining administrative relief, and was dismissed by the Executive Director of the FWC. 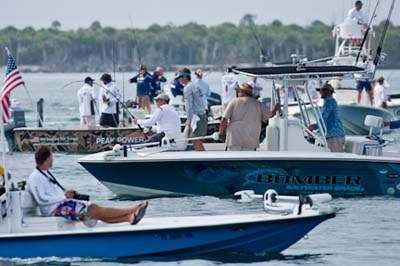 Now this is what I call fun. A relaxing day on the water in Boca Grande Pass.

The PTTS disagrees with the claims that the “jig” used by many of its participants and other recreational anglers is a snagging or designed breakaway device. We viewed the lawsuit as an attempt to restrict the recreational anglers ability to fish with a piece of gear that has proven to be very effective in allowing the masses to catch tarpon in Boca Grande Pass, as well as an indirect assault on the PTTS. Our detractors’ efforts have always been about feigning scientific causation in the hope of developing rules to afford economic protections to themselves, rather than protecting the fish, fishery and the best interest of the recreational fishing public.

In addition to our conservation efforts, the PTTS events and television show provide a significant economic boost to Boca Grande, and the surrounding areas. With over 500 participants competing in our events, many of whom live 100 miles or more away from Boca Grande. Local hotels, resorts, rental companies and restaurants benefit from their need for lodging and sustenance. These tourists and their families often purchase food and drinks, fuel, fishing equipment and other goods and services from local merchants.

Millions of people are exposed to the incredible fishing and wonderful attributes the Boca Grande area and Charlotte Harbor offer to tourists through our television show that is broadcast throughout North America and available in over 44 million homes. Many of these people have visited the Boca Grande area based on watching our program.

In closing, the PTTS stands on our previous assertion that the rules promulgated by the FWC, based on scientific research, should be upheld. Adding further restrictions and regulations with no scientific evidence will set a dangerous precedent and endanger the rights of sportfishing anglers nationwide. Despite baseless claims and defamatory statements directed against our organization, participants and recreational anglers, we will continue to promote Boca Grande Pass as the “Tarpon Fishing Capitol of the World” and encourage people to visit the Boca Grande area. We welcome the opportunity to discuss anything we can do to provide additional benefits to the community.