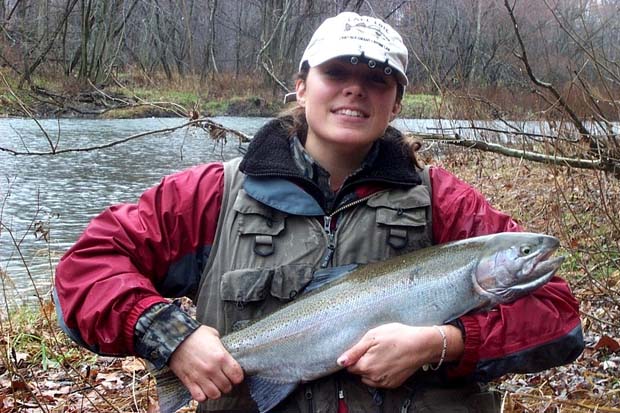 [dropcap]T[/dropcap]he outlying states of the Great Lakes sustain a $7,000,000,000 fishing industry by producing salmonoids through fish hatcheries that enter the system – joining generations of naturally reproducing brethren. All of these fish, whether they were born in a hatchery or matured in a tributary, are genetically programmed to return to their birth grounds and reproduce. The Chambers Creek and Skamania strains of steelhead will migrate in the early spring through the summer months from the deep offshore waters, but the majority of the salmonoids will make the journey during the fall months. Most notably and in this chronological order; the Chinook salmon, coho salmon, brown trout, and steelhead (taxonomically exactly the same as a rainbow trout). All of the latter species capable of reaching 15-pounds and more than a few outliers reaching better than 20-pounds.

When these fish return to the shorelines and tributaries to perform their biological duty of passing on their genetics an angler on foot has more than a fair shot at landing a trophy fish. In the Great Lakes (Michigan, Superior, Huron, Erie and Ontario), this nation’s and Canada’s best fresh water fisheries, bulge with salmons, trouts, perch, bass and walleye that hurry to bulk up for the long, cold winter and to do their spawning thing.

If you live near one of the Great Lakes and have an affection for fly fishing action, this is time to go for steelies and salmons. It’s heating up now up and will stay hot into November and throughout the winter in some fisheries so don’t put the tools away in the basement just yet.