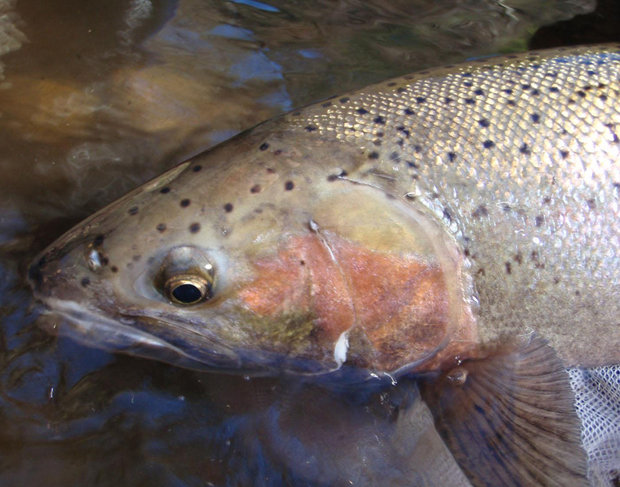 [dropcap]D[/dropcap]utch Flat Dam, a 10-foot barrier built nearly a century ago to provide drinking water to Troy, Idaho, was once as forgotten as the steelhead run that it blocked. The dam spanned the West Fork of Little Bear Creek, which ran so dry in summer nobody thought steelhead survived there. So no one thought much about the dam that had silted in long ago. But about a decade ago biologists realized that protected steelhead in fact do survive and even thrive in such streams, hiding out in pools cooled by underground flows. One biologist even videotaped adult steelhead trying valiantly to jump Dutch Flat Dam to reach five miles of prime spawning reaches upstream.

Now fish will find the going easier, as local leaders and the Idaho Department of Fish and Game worked with federal agencies to take out the dam this summer so steelhead can again swim freely up the West Fork of Little Bear Creek. Crews finished removing the dam’s concrete in early September and are now widening a new course for the creek.

“We’re making quite a bit of progress every day,” said John Johnson, an independent engineer overseeing the project for the Latah Soil and Water Conservation District. NOAA Fisheries and the Bonneville Power Administration funded the project. Crews from the city of Troy are completing the work.

It’s far from the largest dam removal in the West: Elwha and Condit top the charts in that regard. But it’s every bit as important to the steelhead that migrate 500 miles up the Columbia, Snake, and Clearwater rivers to the West Fork of Little Bear Creek. The dam has gone unused since it filled with silt in 1926. But it has continued to block the migration of wild steelhead that have proven more numerous than biologists and locals once thought.

An inventory by Idaho Fish and Game about 10 years ago surprised many locals by finding steelhead throughout the Potlatch River drainage in small streams such as Little Bear Creek that mostly dried up in summer. It turned out that the fish survive the summer in remnant pools cooled by subterranean water. As word of the steelhead spread, so did enthusiasm for removing the dam and reopening the West Fork of Little Bear Creek, said biologist Bob Ries of NOAA Fisheries. Enthusiasm grew even more when a local resident found steelhead spawning in the creek.

Biologists salvaged almost 180 fish from pools below the dam before the removal began and about three quarters were steelhead, Johnson said. It was the most steelhead they had ever captured in that reach, he said, suggesting that many fish stand to benefit from removal of the dam.

Snake River steelhead were listed as threatened under the Endangered Species Act in 1997. Removing migration barriers and restoring access to high quality spawning and rearing habitat is considered critical for their recovery. Together NOAA Fisheries and the Bonneville Power Administration provided $500,000 for the project. NOAA’s funding came from the Pacific Coastal Salmon Recovery Fund, a competitive grant program dedicated to restoring Pacific salmon and their habitat. BPA funding supports habitat improvement projects as mitigation for the impacts of federal dams on the Columbia and Snake rivers.

NOAA Fisheries also used a process called “programmatic consultation” to review the dam removal and associated restoration work. The approach streamlines the review and encourages the use of practices already proven effective, Ries said. He said plans call for leaving the newly freed stream to find its own new path through the channel.

“It will be interesting to watch how it reestablishes itself,” he said.

A plaque will be placed on a remaining abutment of the dam to note its original purpose and role. The full biological and ecological benefits for fish in Little Bear Creek will unfold over the coming months and years. By next summer, as steelhead make their way through the Columbia, Snake, and Clearwater rivers and into Little Bear Creek, they will once again swim into pristine habitat in the creek’s upper reaches.