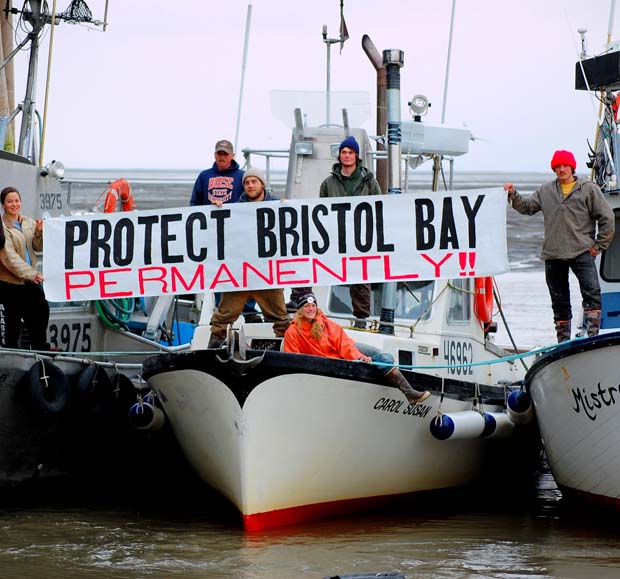 [dropcap]W[/dropcap]hile environmental groups have been pouring energy into opposing the Keystone XL pipeline, a less talked-about fight in Alaska is bubbling over into what The Washington Post says “may be one of the most important environmental decisions of President Obama’s second term”: whether to allow construction of a massive mine near Bristol Bay, one of the most productive salmon fisheries in the world (supplying half the world’s sockeye salmon) and home to potentially vast reserves of gold and copper.

The focus of this fervor is buried near the headwaters of the Kvichak and Nushagak rivers, where massive deposits of gold, copper and molybdenum lie in a watershed that feeds into Bristol Bay. The Pebble Partnership, which owns the land, wants to dig an open-pit mine that could stretch for miles and would need roads, a power plant and a port.

In a 2006 feature, Mother Jones elaborated on what that would look like:

The proposed Pebble Mine complex would cover some 14 square miles. It would require the construction of a deepwater shipping port in Cook Inlet … and an industrial road—skirting Lake Clark National Park and Preserve and traversing countless salmon-spawning streams—to reach the new harbor. At the site’s heart would be an open pit measuring two miles long, a mile and a half wide, and 1,700 feet deep. Over its 30- to 40-year lifetime, the Pebble pit is projected to produce more than 42.1 million ounces of gold, 24.7 billion pounds of copper, 1.3 billion pounds of molybdenum—and 3 billion tons of waste.

Not only would the Pebble mine be North America’s biggest, it would be 20 times larger than all other mines in Alaska combined. And the companies behind it aren’t even American. The Pebble Partnership is a joint venture between Anglo American, a British mining firm currently facing a class-action lawsuit from South African gold miners, and Northern Dynasty, a Canadian company whose interest in the Pebble Partnership is its principal asset. Opposition to the project has united the fishing industry and local tribes, two groups often at odds. Mother Jones said the Kvichak is “known to anglers as the most abundant salmon stream on the planet and as home to some of Alaska’s most gargantuan rainbow trout.” For native communities, the hunting and fishing supported by this watershed provide a crucial source of food and a link to traditions.

As oil production, long a profitable mainstay of Alaska’s economy, has slowed in the state, leaders are increasingly turning to mineral extraction as a less-lucrative but better-than-nothing supplement. But that doesn’t make it an easy sell, even to impoverished rural villages desperate for sources of income. Polling by mine opponents found 58 percent of Alaskans overall, and 80 percent of Bristol Bay residents, do not support the project – a sharp contrast, Politico noted, to the majority who support drilling in the Arctic National Wildlife Refuge. You just don’t mess with salmon. The notoriously conservative Seattle Times editorial board recently came out against the mine, pointing out how Alaska’s fishing industry is intertwined with Washington state’s economy (many companies that process Alaskan seafood are based in Seattle).

In a report (PDF) released last week, Pebble Partnership stated that the operation would generate almost 5,000 jobs in Alaska during construction and at least 2,750 permanent ones. But Tim Bristol, the aptly named director of Trout Unlimited’s Alaska program, told The Washington Post that 14,000 jobs depend on a healthy salmon fishery, and that Pebble has “a well-established track record of … exaggerating the benefits” of the mine.

Concern about mining in the area has intensified since 2005, when the Alaska Department of Natural Resources reclassified much of the Bristol Bay area’s state-owned land to make it more open to mining. Pebble leases the mineral rights of the land it currently occupies from the state, but has held off on securing other permits necessary to forge ahead with mining. In 2010, at the request of six Alaskan tribes, the Environmental Protection Agency took the unusual step of launching an assessment of the impacts of mining in the watershed, even though Pebble has yet to apply for a federal permit from the Army Corps of Engineers. The Post reports:

In an early environmental assessment, the EPA estimates the mine would probably cause the loss of between 54 and 89 miles of streams and between four and seven square miles of wetlands. Any accidents, the assessment continued, could result “in immediate, severe impacts on salmon and detrimental, long-term impacts on salmon habitat.”

In May 2012, EPA submitted its initial findings to a peer review panel, which released an updated assessment in April basically confirming what the agency had already found. Comments on the revised assessment are now being accepted through June 30.

Mine opponents want EPA to use its authority under the Clean Water Act to block the project – something the agency has only done 13 times since 1972, and only once during the Obama administration.

Both sides are already spending hundreds of thousands of dollars a year lobbying; Pebble has spent at least $450,000 each year since 2008. Stakeholders are anxiously waiting for Sen. Mark Begich (D-Alaska) to come down on one side or the other, but Begich, who faces a tough reelection fight next year, has been cagey aside from offering the opinion, shared by his fellow Alaska Sen. Lisa Murkowski (R), that EPA shouldn’t preemptively veto the mine.

Pebble says it hopes to apply for a federal permit this year.

Claire Thompson is an editorial assistant at Grist.