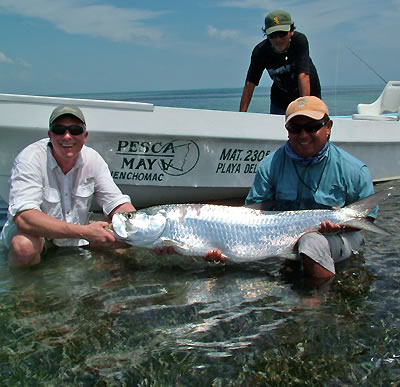 By CHRIS SANTELLA
Published in The New York Times: June 18, 2012

PUNTA ALLEN, Mexico — For nearly two millennia, the Mayan people along the Yucatán Peninsula’s Caribbean coast have relied on fishing for sustenance and trade. The tradition continues, though today many Mayan fishermen are as likely to be throwing a 10-weight graphite fly rod as a net.

With the Yucatán’s emergence as a popular flats fishing destination, local lobstermen have been recruited as fly-fishing guides to lead anglers to bonefish, tarpon and permit.

“At some saltwater destinations, it’s not uncommon for guides from the Florida Keys to be airlifted in to lead guests to fish,” said Dick Cameron, owner of the Palometa Club, a fly-fishing lodge in Punta Allen, a village near the end of the Boca Paila peninsula, 30 miles from Tulum, that specializes in permit, or palometa in Spanish. “It’s been different on Ascension Bay. Jan Isley, a renowned Keys guide who discovered the region’s fly-fishing possibilities in the ’80s also recognized the potential the local lobstermen had as guides. He understood that these men are out on the water all the time and know where the fish are.”

To read the full story […] A version of this article appeared in print on June 19, 2012, on page B15 of the New York edition with the headline: Finding Work Through Others’ Play.