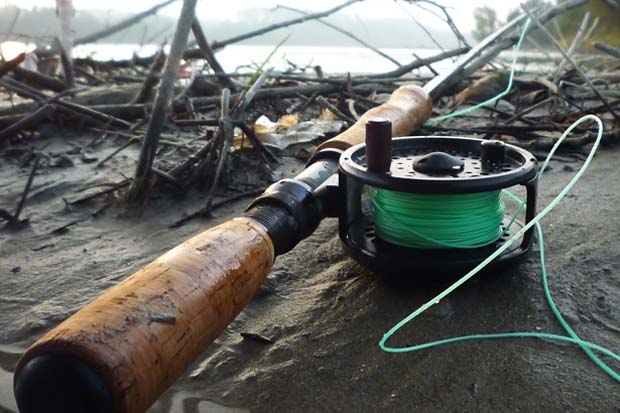 Learning to use a switch rod is easy, but understanding fly lines for two handed rods is a trip

[dropcap]V[/dropcap]enturing into new fly fishing techniques, rods and fly lines three years ago was not a serendipity thing nor was it cheap because I made plenty of mistakes. Sort of like Yogi Berra used to say: “If you come to a fork in the road, take it.”

Physical limits was the thrust that sent me to look elsewhere; creaky shoulders and wrist joints – all byproduct of too much football (HS, college and pros) forced me to either give up single handed fly fishing or go back to chucking hardware with treble hooks. Fly fishing, though, is just too much fun and a hook up with even a bluegill is like catnip for me.

Being an Easterner, I had to look west for new and better. Westerners, always ahead of the sleepy fly fishing industry curve, and actually Westerners drive the industry. These folks have long since embraced Spey and switch rods. The Great Lakes lads and lasses should not be left out of progressive awareness, but they are ‘Johnny come lately’ when calendar compared to the Northwest U. S. involvement. Nonetheless, they are now contributing with innovative fly patterns and casting techniques, albeit about fresh water animals only.

So, now what? I have a switch rod

The first conundrum is fly lines for a switch rod converter. There are way too many fly lines out there and performances vary widely. For example, are you a trout and salmon person, are you going to be swinging, nymphing, dredging, search casting, using dry flies, are you principally over head casting or principally Spey casting? Are you mostly saltwater? Yes, there are lines for every occasion, but not so much, fortunately, if you are fishing just saltwater.

The difficulty with understanding switch rod lines is somewhat intimidating. As a matter of fact, I have an angling buddy who had a great switch rod sitting in the garage for over a year because his fly shop guy put an absolutely wrong fly line on and he could not get expected performance, so he parked the rod and gave up. He’s back giving it another go with a RIO Switch Line. We fish our ‘switches’ together this week if the weather behaves.

It is a gallon and liter thing

One of the first things that helps you understand two handed rod fly lines versus one handed rod fly lines is to know that they are not measured the same way. Single handed and two handed fly lines are rated by the American Fly Fishing Trade Association as following (AFTTA Approved Fly Line Weight Specifications) and (AFTTA Approved Spey Line Weight Standards). Measuring fly lines in grain weights is the done by the American Fishing Tackle Manufacturers Association. It is different – (AFTMA Two Handed Rod Grain Weights Standards).

A shooting head allows anglers to carry spare heads and switch them out without carrying spare fly lines with different performance characteristics. Simply un-loop and add the new line. Spare lines and/or spools or fly reels can be carried, but the leanest way to change sink rates on a hour-to-hour basis is to fish a shooting head system.

Good examples of shooting heads are RIO’s Out Bound (comes as a ‘short’ also, which is best for a switch rod) and Airflo’s 40+ and Joan Wulff’s Ambush (if really long casts are what you want, this line just might be the ticket).

NOTE: With a switch rod you can be use your 9-foot overhand casting fly lines – just add two line weights. If you have a 5-weight switch rod use your a 7-weight fly line. The performance will not be as good as with a  line designed for two handed switch rod, but it is plenty doable and less expensive than buying specialty fly lines.

• Skagit heads are used in conjunction with tips that are short lines added to the skagit head and have various sink rates. Skagits are also used for distance, depth and big flies. They are thick and offer more water resistance to get a better load on the two-handed ﬂy rod. Even with a switch rod they will perform better if principally used for Spey casting.

• Scandi is a complete system developed for small flies cast with obstructions immediately behind the angler. You do not use tips with these lines. Scandi is perfect for trout fishers and smallish flies.

• Tips are Poly Leaders (Airflo) or Versi Tips (RIO). They are short +/- 10-feet of various sink rate lines that are loop to loop connected to your shooting head. They are handy to keep in your pocket. When fishing conditions change and you need to get down – these make life easy.

Check out this video. What Fly Line to Buy for a Switch Rod? It is a western look at the issue so the narrator focuses on fresh water switch fly lines. Both RIO and Airflo, as well as others, make “tropical” switch fly lines lines.