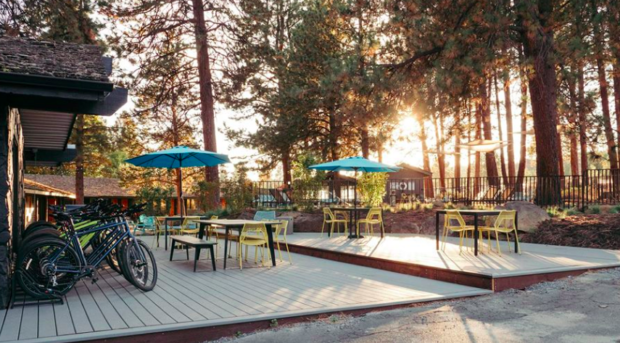 Roughing it with trouts, but a cold one waiting at the “LOGE” LOGE could be the best family and like-minded groups’ future solution to economically enjoying DIY fly fishing, canoeing, kayaking, hiking or any other all day outdoor immersion, but have a hot shower and warm, restful bed at its end.

Made-for-outdoors ‘camps’ are the heart of the LOGE formula. LOGE converts motels to adventure destinations with equipment rooms, free bikes for use, RV hookups, tent platforms, hostel buildings, and gear for a demo or purchase on site.

Relinquished motel properties converted into oases of outdoor recreation is the theme for most LOGE projects – this means general fix-up and modernization of neglected properties to create what the company notes are ‘overnight hotel and camping accommodations catering to fly fishers and all outdoor enthusiasts.’”

A road trip across the Pacific Northwest this past summer landed my family and me at two LOGE  (pronounced “lodge”) Camps. We surfed Pacific waves while staying at the Westport, Wash., location. Each night, we dried wetsuits in a lux gear room off the lobby. In Leavenworth, despite the unexpected heat, my crew biked, hiked, and jumped in the Wenatchee River to cool down at day’s end.

In the fall, I toured the Bend, Oregon LOGE. It was tuned precisely for the outdoors set all the way down to the bike-repair station and hammocks in the rooms. Oh, and some of Bend’s best singletrack trails stream to all compass points from the newly opened location.

LOGE  announced a significant expansion and new funding for the company. In 2019, it will double its footprint, opening destinations in California and Colorado. Eight of the hotel-campground amalgams will open by the middle of 2019. The company is on track toward nationwide expansion in the years ahead.

“We have no background in this — or no network with money,” said Cale Genenbacher, co-founder and president of LOGE, in a phone interview. He was referring to the fact that the startup has raised about $6 million. It now boasts a board of directors with some big outdoor-industry names and plans to procure millions more in funding to grow.

LOGE began with a Kickstarter campaign that garnered $30,000 in early 2017. Since then, Genenbacher described sleeping in his truck while scouting locations and the “thousands of phone calls made” by he and co-founder Johannes Ariens over the past two years.

Soon, new LOGE Camps will open in Breckenridge and Estes Park in Colorado, and at Big Bear and Mt. Shasta in California. Current locations include Westport, Snoqualmie Pass, and Leavenworth in Washington state as well as a property in Bend, Ore., at a hotel formerly known as the Entrada.

LOGE is based in the Seattle area. As the story goes, founders Ariens and Genenbacher saw the growing popularity of people flocking to the Pacific Northwest for mountain and outdoor ocean recreation. However, there were little-to-no lodging options once on the coast. And prices were not affordable at many mountain resorts. So the co-founders conceived a new template. LOGE would offer people options to stay in individual rooms, hostel-style buildings, or camping spots. Prices were to be about $45 and up.

“The direction of travel in the outdoor and active lifestyle space is luxury,” Genenbacher said. “However, most consumers simply can’t afford the luxury they are looking for.”

He continued, “A $500-per-night room is the norm in many ski towns, and it can be thousands of dollars to ski for a family weekend in many resort towns — that is just B.S.” One of several room configurations/camps/cabins offered by LOGE.

My family grabbed a cabin in Leavenworth at $125 per night. It was immaculately clean and comfortable, with fresh paint and new fixtures and furniture. And it was filled with gear and adventure-themed art and accouterments:

1. The cabin served as a perfect base camp for a weekend of adventures.

2. Our small patio overlooked a river, and trails into the mountains were reachable nearby.

3. Beyond the price game, LOGE provides a template to touch and feel (and purchase) gear right from your room.

4. Now and expanding into the future partnerships with retailers that will add product offers and rentals of key gear-like Eddie Bauer.

5. Beer and coffee as well as cafes, kitchens, couches, and even board games on shelves in communal areas create places to chill throughout the LOGE network. Outside, strung lights, fire pits, paths, and stages for live bands and movie nights combine for an aesthetic somewhere between summer camp and a millennial-era music fest.

I drank the LOGE Kool-Aid while in Washington state. The equation of fair-priced accommodations, a choice of sleeping arrangement (from campsites to private cabins), and gear all around seemed tailor-made for my family and me.

Stephen Regenold is Founder of GearJunkie, which he launched as a nationally-syndicated newspaper column in 2002. As a journalist and writer, Regenold has covered the outdoors industry for two decades, including as a correspondent for the New York Times. A father of five, Regenold and his wife live in Minneapolis.