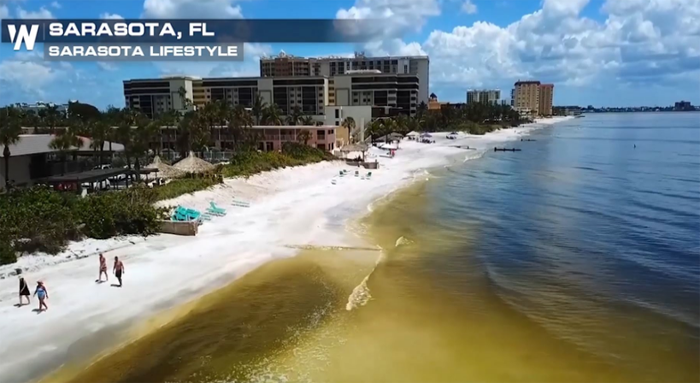 “The Red tide begins when onshore runoff drips into the coastal waters. This runoff contains human waste and chemicals from fertilizer and numerous other ingredients. Initially this starts as a hyper-local event but as more fish or marine life die, it adds to the unhealthy mixture creating a large scale impact.” — WeatherNation Red Tide analysis. Image screenshot – west coast Florida.

South Florida’s current water management engineering plans for the “Reservoir” to clean up the filthy, toxic water spewing into the Gulf, south into the Everglades, and into the Atlantic Ocean won’t work

[dropcap]I[/dropcap]t won’t work. A newly published, peer-reviewed scientific evaluation of the EAA Reservoir plan is calling for a dramatic shift in design to ensure that good intentions don’t just end up polluting our waters and making us and our Everglades more sick, later.

Conclusions reached in the independent analysis, “Comments on the Current Reservoir Plan for Solving Harmful Algal Blooms and Restoring the Florida Everglades,” published in Elsevier, a peer-reviewed journal on environmental engineering, are clear: “There is insufficient detail on water quality in the plan relative to water volume and flow. The flow south to the Everglades will increase by 76% but the project shows only an 11% increase in treatment wetlands of 6,500 acres to improve water quality directly. This is totally inadequate to insure that clean water will be delivered to the Everglades.”

The original report was filed with the U.S. Army Corps of Engineers comments by Mitsch and Friends of the Everglades in late April, 2018.

The latest conclusion is hardly out of the blue. It is in agreement with conclusions reached by scientists in February, 2018 in a report published by the Everglades Foundation, “An Analysis of the Proposed EAA Reservoir Options view.” In that report, a team of scientists reasoned that the current design lacked sufficient treatment capacity to clean enough water to cut discharges or boost flows to the Everglades. As designed the project costing more than $1 billion would miss the water volume and water quality targets. They offered a preferred alternative to the state’s design, suggesting significantly more acreage for stormwater treatment.

In 2018, the US Army Corps Headquarters and the Assistant Secretary of the Army for Civil Works stated that there is “high risk of non-compliance with water quality standards” based on the current reservoir design.

Author of the independent science report Bill Mitsch states, “I estimate an additional minimum of at least 43,000 acres of treatment wetlands will be needed to treat the water flowing south and have recommended previously that 100,000 acres should be set aside for treatment wetlands. In ecological engineering, as in all fields of engineering, a safety factor of two is reasonable to ensure that the wetlands meet our goals of water quality.”

Citizens who live on the Caloosahatchee or the St. Lucie should remain concerned about serious, life-changing threats to their health. By endorsing the Mitsch report, Bullsugar.org couldn’t be further from “playing a parlor game”: words used by Everglades Foundation executive director Eric Eikenberg in a comment to the TC Palm.

For a quick moment, leave science to the side. Ask yourself: who will you complain to, 10 or 20 years from now, if you or family members face life threatening illness caused by water management decisions based on expediency instead of science? Are you prepared for, “Oh we had the science, but we are deeply sorry for your loss”?

It’s not just about the loss of nesting wading birds, and the snook, and the bonefish. Even though those would be enough to mourn in anger. It’s about you and us. We have to do better. Ask state legislators to fix the 2017 Negron legislation–like its provision banning eminent domain–and support revisions to a reservoir that scientists say cannot work without significant additional storage treatment areas.

P.S. If you can, please become a Bullsugar.org member today to help us win a political solution to Florida’s water management crisis.