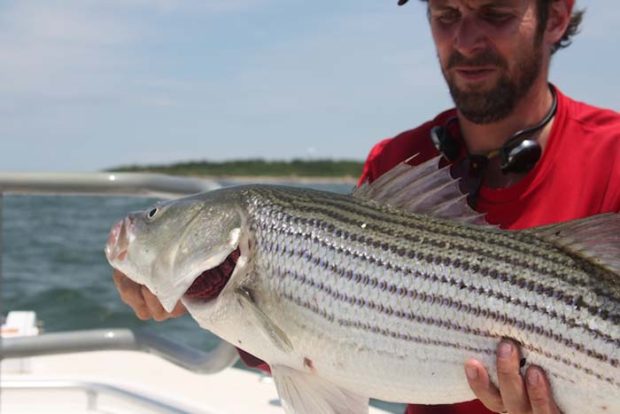 Chronic disease infects most of the striped bass in the Chesapeake

By Karl Blankenship for Bay Journal

[dropcap]W[/dropcap]hen Wolfgang Vogelbein peered at striped bass sores through a microscope 22 years ago, he knew he was looking at something very different than what was grabbing headlines at the time.

Pfiesteria piscicida — the so-called “cell from hell” — was being blamed for fish kills in Maryland and making people sick.

But what Vogelbein saw through his lens wasn’t the result of a harmful algae toxin. It was a nasty bacterial infection, creating ugly sores on the outside of fish and lesions on the inside. 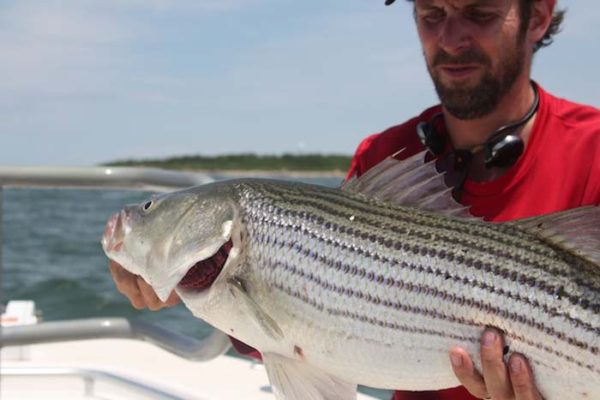 The infections were caused by mycobacteria, a type of bacteria that are widespread in the environment, but not typically associated with problems in wild fish. Suddenly, though, it was turning up in large numbers of the Chesapeake Bay’s most prized finfish.

“I thought I would be spending the rest of my career working on myco,” recalled Vogelbein, a fish pathologist at the Virginia Institute of Marine Science.

It didn’t turn out that way. Mycobacteria never snagged the attention — nor large-scale research funding — as did Pfiesteria. Nor was it associated with high-profile fish kills or considered a human health threat.

Decades later, Pfiesteria has largely vanished from discussion, and some scientists now question whether it was responsible for fish kills at all. 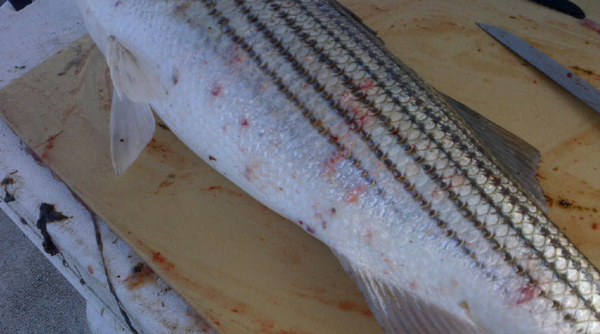 But the mycobacteria problem never went away — and has only gotten worse. The majority of the Bay’s striped bass are infected and, by the time they are 5 years old, nearly all carry the disease. An unknown number are thought to die. “We think it is substantial,” Vogelbein said.

Now, with the striped bass population in trouble, the Bay’s mycobacteria problem may get another look. Striped bass numbers have been declining along the East Coast for a decade and a half, and a recent stock assessment for the Atlantic States Marine Fisheries Commission concluded that the population was being overfished.

The commission, comprised of East Coast fishery managers, at the end of October acted to reduce harvests 18% in the Bay and along the coast beginning next year in response.

But the assessment also raised questions about whether mycobacteria infections may be playing a bigger role in the decline than currently thought, citing studies that suggest even higher rates of mortality among striped bass from the Bay than assumed in the assessment. The study called for a better understanding of the impact the disease might be having in the Bay and coastwide, and flagged it as one of the highest research priorities.