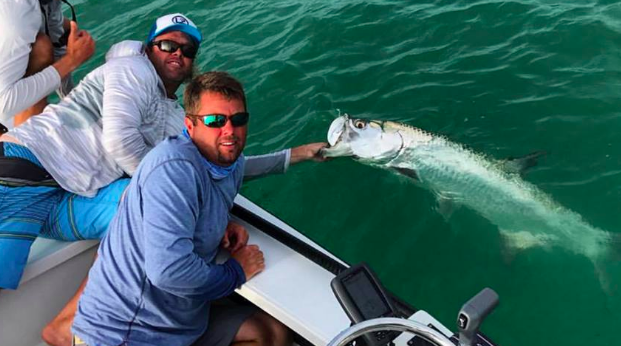 [dropcap]B[/dropcap]TT began to acoustically tag tarpon in May 2016 in an effort to expand our knowledge of tarpon habitat use and movement at different life stages. We just received a noteworthy report of a tarpon detection from BTT’s Tarpon Acoustic Tagging Project, and it provides additional insight on tarpon movement. A 40-50 pound male tarpon (ID #15923) tagged in the Lower Keys on May 12, 2017 was detected near Ocean City, Maryland this summer, on July 24, 2018. If the fish followed the Gulf Stream north, it swam roughly 1,000 miles, but if the fish followed the coast, it likely traveled twice that far! BTT scientists estimate that the tarpon now weighs approximately 60 pounds.

Using acoustic tags allows BTT scientists to tag juvenile, sub-adult, and full-grown tarpon, whereas previous satellite tagging efforts were limited to tagging fish 80 pounds or larger. It is remarkable that a tarpon this size traveled such a long distance, as the fish is still years from becoming sexually mature, which was believed to be the point at which tarpon begin migrating long distances. This recent detection underscores the importance of acoustic tagging, which provides new insight into tarpon movement and habitat use during different life stages, information that is critical to BTT’s conservation efforts. We thank Maverick Boat Group for its generous support of the BTT Tarpon Acoustic Tagging Project, as well as Capt. Danny Flynn and Capt. Ron Gibson, who assisted with the tagging of tarpon #15923. Stay tuned for more reports!