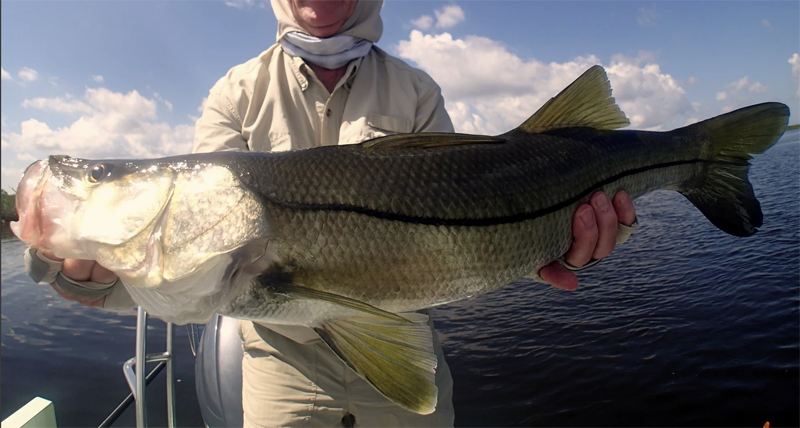 The common snook [Centropomus undecimalis] occurs from South Carolina to Brazil, including Florida to Texas along the Gulf of Mexico, Cuba, Puerto Rico, and the Cayman Islands. The Pacific version, [Centropomus spp.] 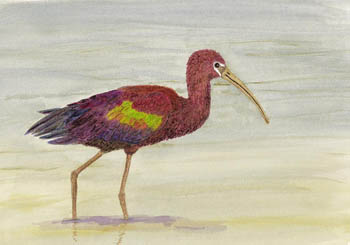 Glossy Ibis – Illustration by Thom Glace. Shore birds are a bonus of fishing the beaches.

However, they are generally found in southern Florida, from about Cape Canaveral on the Atlantic coast, around the peninsula, to about Tarpon Springs on the gulf coast. The distribution then becomes disjunct, and they are again found from southwest Texas, south along central and south America, to Rio de Janeiro, Brazil.

The common snook is the largest and most common of the five species and is the species caught by most anglers. In Florida waters, undecimalis may grow to 48-inches and 38-pounds. The IGFA world records are: 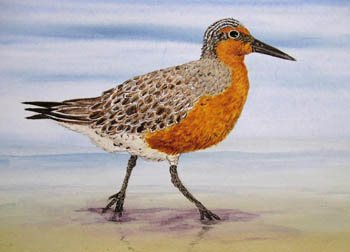 Red Knot – Illustration by Thom Glace. Shore birds are a bonus of fishing the beaches.

During winter months, snook stomachs contain only about a quarter of what is in them in the summer. This is likely because cold water causes their metabolic rate to slow, resulting in decreased feeding. In fact, snook are extremely cold sensitive and become lethargic and may die when water temperatures dip below 60 degrees for any length of time. — Betty Staugler, University of South Florida 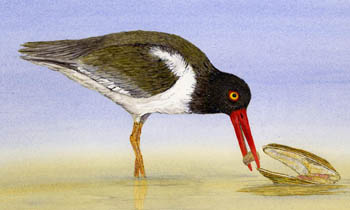 Oyster Catcher – Illustration by Thom Glace. Shore birds are a bonus of fishing the beaches.

Fly fishing the beaches of South Florida’s coasts offers  solace and great post spawn snook action because the fish are hungry and the snowbirds are still in New Jersey. Note: Everglades National Park has it offering but no real beach to match the Gulf of Mexico or the Atlantic Ocean.

Because of wind coming off the water, although usually still at dawn and dusk if no weather front is in play, it’s making mine a nine [9-weight] for surfing for snook. There are several tried and true fly patterns to go with, but today here’s a version of the 40 Snook Fly as tied by Don Reed of St. Augustine, Florida.